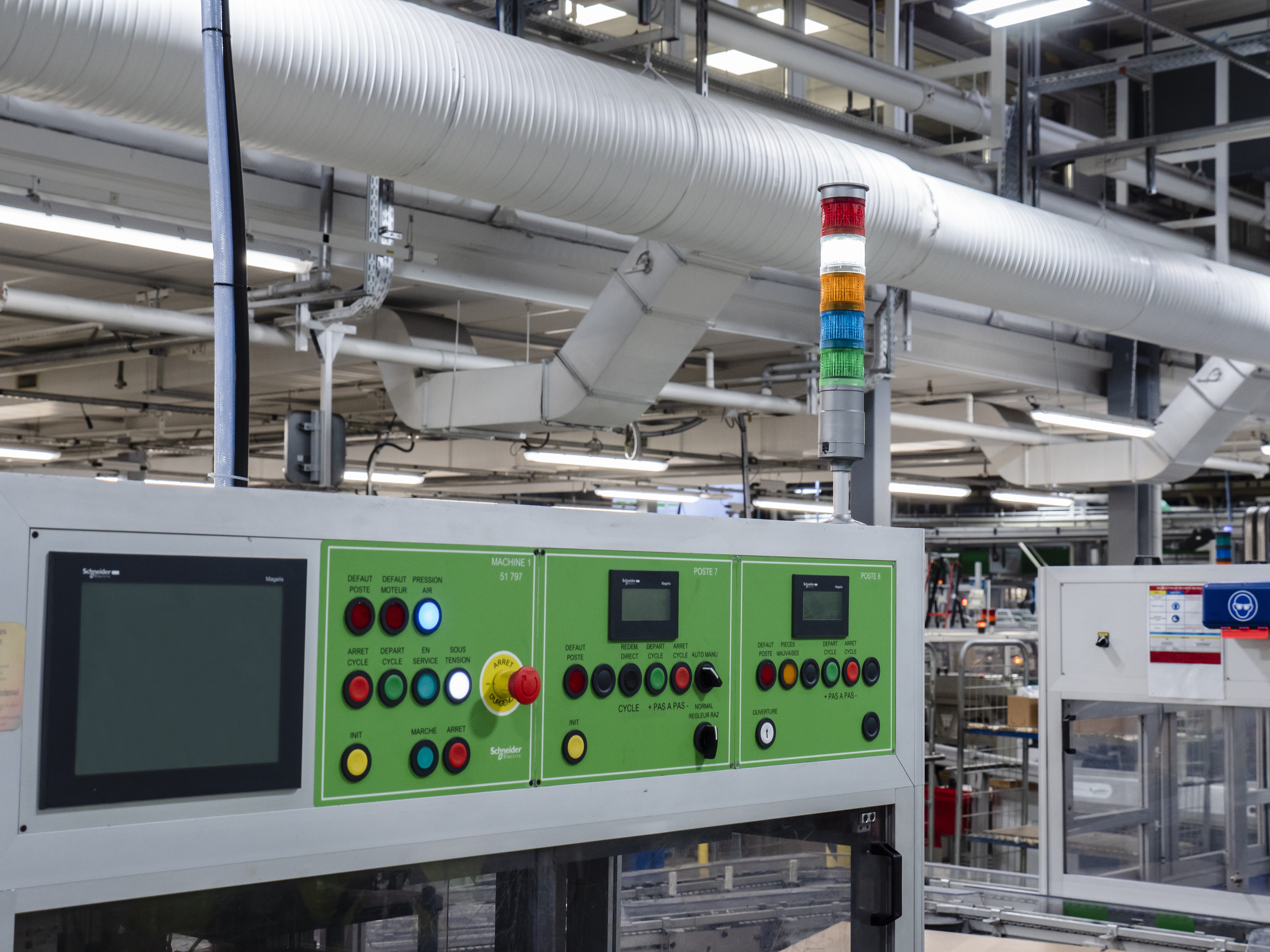 For anyone who is not involved in the industrial world, being in front of a machine can be disconcerting. And the control panel, even though it is often clear and uncluttered, can still quickly look like a Christmas tree to those who do not know how to figure it out. Between the different HMI screens, the buttons of all colors and the indicator lights and tower lights multiplying the flashing and sometimes sound effects, it is very difficult to find your way. And as you can imagine, all this is not there to answer a purely aesthetic logic that would try to make a command interface look like the coolest spaceship.

On the contrary, all the colors and the way they are displayed are homogeneous and depend above all on the IEC 60073 standard, which defines the coding principles for indicators and control elements.

Indeed, the color of a product, but also its change of status in time (flashing, strobe, etc.), are the most effective visual means to attract attention. Therefore, these color codes, or other visual symbols, must be used with a consistent meaning in mind: today, colors on buttons are mostly used to indicate priority of action, while flashing is generally there to attract the attention of the end user.

For clarity purpose, the IEC 60073 standard deals only with the following colors:

Below is a simplified explanation of the color codes for actuators, buttons and illuminated functions.

In addition, the standard also lists color and visual codes that may be like the information provided by traffic signs when learning the driving theory test. 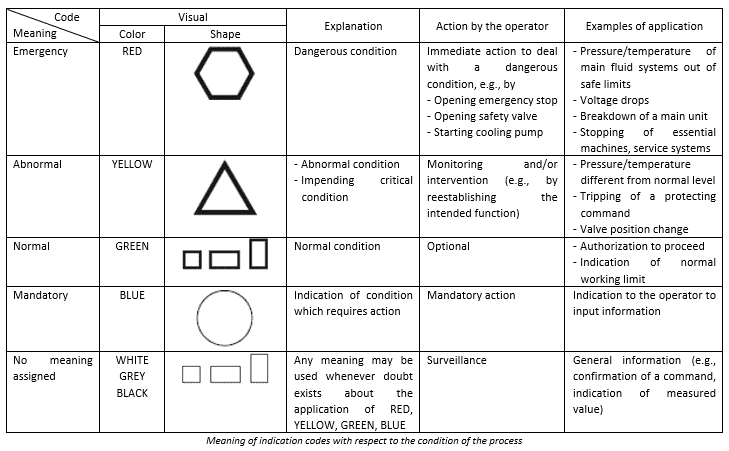 It’s normal if information in above table sounds familiar to you!

Translated to the world of human/machine interfaces, here are the main functions to consider:

EMERGENCY STOP / OFF actuators must be identified by the color RED. Exceptions are allowed if the color is not available, in which case other means must be used to reliably identify the actuator function.

If the same actuator is used for both emergency operation and normal STOP / OFF operation, the color must be RED. Exceptions are allowed if the color is not available.

Regarding the STOP / OFF actuators, WHITE, GREY, and BLACK are their reference colors, with the main preference being for BLACK.

RED is allowed. However, GREEN is totally forbidden.

WHITE, GREY and BLACK are the preferred colors for START / ON actuators, which cause the closing of switching devices and the equipment to start, with a preference for WHITE.

GREEN is also permitted. RED shall not be used.

The same actuators serving for START and STOP or ON and OFF:

WHITE, GREY and BLACK are the preferred colors for actuators which, when actuated several times, act alternately as START / ON and STOP / OFF.

The colors YELLOW and GREEN should not be used. The color RED shall only be used in cases where the same actuator, other than a pushbutton, is used for both EMERGENCY STOP / OFF and normal operation.

WHITE, GREY and BLACK are the preferred colors for actuators that cause movement when actuated and stop movement when released. GREEN is also permitted. RED shall not be used. 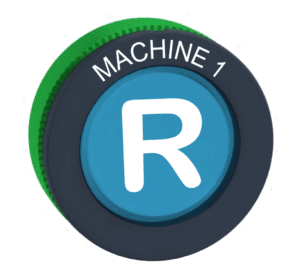 Concerning the indicator lights, the lighting is also governed by a whole series of codes. There are 3 types of pilot lights:

The color code for the indicator lights is the same as for the other non-illuminated buttons. In case of difficulties in assigning an appropriate color, neutral WHITE should be used.

Attention! The RED color used in the EMERGENCY STOP / OFF applications must be assigned to the actuator itself, and not to its lighting (even if redundancy is allowed). 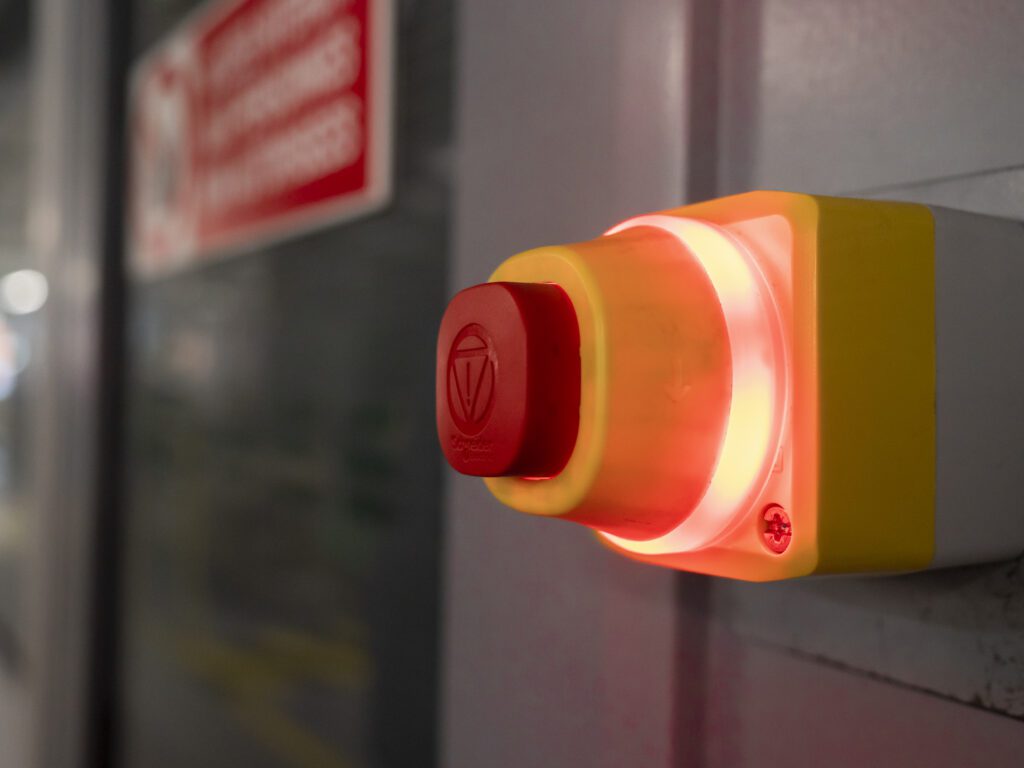 For type A and B actuators, the following main operating modes can be distinguished:

An actuator is illuminated to indicate to the operator that he or she may or should operate the illuminated actuator or, in some applications, that he or she should perform a certain task and then operate the actuator. Receipt or execution of the command (which has been given by operating the actuator) is confirmed by turning off the light or changing, for example, the color code or additional means of coding (e.g., time).

Sequence: The first actuator lights up, then the operator operates the actuator. The colors WHITE, YELLOW, GREEN or BLUE must be used in this mode.

A flashing light can be used to attract the operator’s attention, for example in the case of an alarm. When used in this way, the operation of the actuator can turn the flashing light into a steady light. The steady light then remains on until the cause of the alarm has been eliminated by a separate action.

When an unlit actuator has been operated, it lights up to confirm that the command (given by operating the actuator) has been received or executed. It remains lit until a contrary command follows.

The colors WHITE, YELLOW, GREEN or BLUE shall be used in this mode.

Illuminated actuators can be used with a flashing light to provide “step confirmation”. When the non-illuminated actuator is operated, the light will begin to flash to confirm that a starting operation or sequence or a transition period has been initiated. When this is complete, the light will automatically change to a steady light or remain off to confirm that normal running conditions have been established.

Type C actuators can be used in both modes. Each application must be carefully considered to avoid confusion.

NOTE: Mixing modes 1 and 2 on the same display can cause confusion and should be avoided unless they are clearly differentiated by actuator type or other coding means.

Schneider Electric offers a wide range of colors for the buttoning combining robustness and aesthetics, to meet all needs. And for even more ease of storage and mounting of LED lighting products, while increasing the contrast and purity of colors from the standard, come and discover the new range of lighting functions that now offers a single white LED compatible with all head colors. 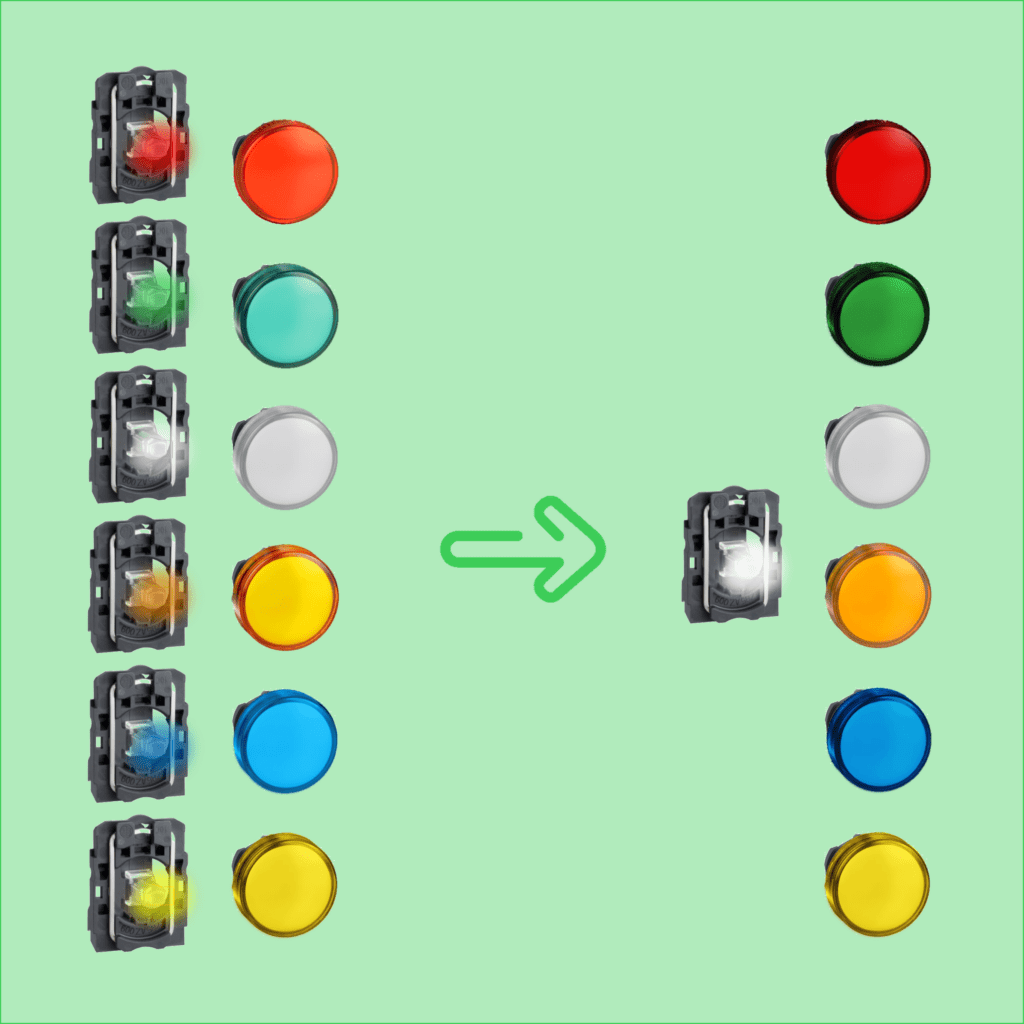 The Truth Behind the Colors of Pushbuttons

The importance of color to improve operator efficiency

Can robustness, aesthetics and ergonomics for control interface coexist?