The US crude oil output will grow at a CAGR of 5% through 2020, as domestic shale and tight oil production continues to boom. Production will grow at a more moderate pace after 2020, and additional investment will be needed to support that.

The country is increasing its crude oil production at a time when other major producers, Russia and members of the Organization of Petroleum Exporting Countries (OPEC), have been cutting their output to balance oil prices.

The country produces 73% of its petroleum and liquids consumption, therefore it still relies on imports to meet the demand. Oil is mostly imported from Canada (43% of total imports), South America (17%), Saudi Arabia (12%), Mexico (8%), Iraq (7%) and West Africa (6%). The US claims to be getting closer to self-sufficiency in oil by 2020. The county is already self-sufficient in natural gas.

Export opportunities have recently re-opened for the US due to: 1) increased production, 2) lift of a 40-year export ban leading to a free trade in crude, 3) additional volumes provided by Independent operators. The US exported 6.3 million bpd of crude oil and petroleum products in 2017, a 19% increase from the previous year. Crude oil accounted 1.1 million bpd, mainly light and low in sulfur, since the US refineries are built to process heavier crude types. Rest of the exports consists of refined petroleum products. Diesel, for instance, is sold to the European markets with a stronger demand; and large volumes of propane are exported to supply petrochemical feedstock demand in Asia.

Crude oil production has been dominated by OPEC cartel for the past 6 decades, with non-OPEC members including the US, Russia, China and Brazil among the top market players.

Russia, Saudi Arabia, the US are the market leaders, with crude oil production in 2017:

The US crude oil production has increased by 88% over the past decade, driven by production of tight oil using horizontal drilling and hydraulic fracturing. Oil output hit its highest level ever in March this year reaching 10.5 million bpd, and surpassing Saudi Arabia (9.9 million bpd output).

The US Energy Information Administration (EIA) said that country’s crude oil production would average 10.8 million bpd in 2018. That could take it past the top producer, Russia, which pumps just below that mark. Output will average 11.8 million bpd in 2019, and it is expected to rise to 12 million bpd by the 4th quarter of 2019.

Analysts predict that this year will see the highest US natural gas output ever, and the biggest jump in production by far. Output will continue to grow in 2019, but at a smaller pace. The country is also on the way to join top liquefied natural gas (LNG) exporters, Qatar and Australia, by the mid-2020s. The 1st shipment of the US LNG left in February 2016, and export capacity is expanding rapidly since then. The country exported 17.4 bcm of LNG in 2017, comparing to 4.3 bcm in 2016.

Total petroleum production is made up of different types of liquids. In crude oil output, the US is not yet #1 producer, however it is already the leader in Global liquid fuels supply: 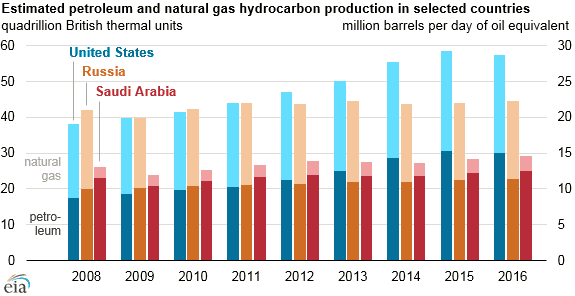 Petroleum and liquids production includes crude oil, products of petroleum refining, natural gas liquids, biofuels, liquids derived from other hydrocarbon sources (e.g. coal-to-liquids, gas-to-liquids). The US is the World’s largest producer of biofuels (biodiesel and ethanol) with 44% share of Global production (36936 thousand tons oil equivalent in 2017). The US primarily produces ethanol from corn, and biodiesel from grain stock. It is also a leader in the development of advanced biofuels, particularly algae-based fuels.

The US was the top producer of crude oil and natural gas for the 6th consecutive year in 2017. The country intends to supply more of the Global oil demand over the next 5 years. Growing US production is supported by technological advances and recovery in oil prices.

The US production is offsetting OPEC’s cut and is contributing to the growing non-OPEC supply along with Canada, Norway, Brazil. OPEC output is challenged by falling Venezuelan production, possible outages in Iran, Libya and Nigeria. Over the next 3 years, gains from non-OPEC producers will potentially cover 100% of the World’s demand growth.

The US is extending its lead in the oil and gas industry. Key factors supporting the growing dominance are:

Explore Schneider Electric solutions for Oil & Gas and Petrochemicals that will help you to be future-ready: https://www.schneider-electric.com/en/work/solutions/for-business/oil-and-gas/