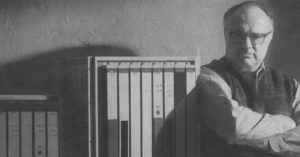 The year was 1968 and in Flint Michigan a large US automotive manufacturer had commissioned a small technology firm to come up with a more efficient way of making changes to their automation systems during annual model year updates. State-of-the-art for industrial automation systems at the time was an approach which relied on hard wired relay logic. Control systems were housed in massive industrial control cabinets in the car maker’s factory and changing machine operational sequences meant banks of relays and thousands of wires had to be reconfigured.

These large control enclosures took up valuable industrial real estate. To reconfigure them was a difficult and error prone process. In addition, troubleshooting failures during production was both laborious and time consuming.

The small technology firm hired by the auto maker was Bedford Associates and Dick Morley was one of its electrical engineers. Their proposed solution was based on newly emerging digital technologies and involved wiring sensors and limit switches etc. to a new invention which would drive solenoids, lamps, actuators etc. The term ‘inputs’ was used to describe signals from the field and signals going to the field were called ‘outputs’. In between these ‘inputs’ and ‘outputs’ the design of the control scheme took a revolutionary new approach. Inputs could be linked in strings to outputs just like the hard-wired approach but that linkage could be configured or programmed rather than manually hard wired in a control cabinet.

This new digital design immediately made it easier to reconfigure systems, improved system reliability, and reduced the wasted production real estate required by control systems at the time.

Dick Morley and Bedford Associates had invented the first Programmable Logic Controller (PLC). It was called the Modular Digital Controller because of its modular construction and use of digital technology. Dick shortened this to MODICON and a revolution in industrial control began.

The original MODICON 084 provided a huge profitability improvement for our customers in terms of reduced time to market and production downtime. Dick Morley’s invention was born out of the realization that Industrial Automation can be a significant source of value for manufacturing companies, a Profit Engine which can help them measurably improve their bottom line. This the continuity of the story to discover here

Today the legendary MODICON brand name is owned by Schneider Electric and we are committed to continuing the legacy of Dick Morley and his invention as we continue to help our customers maximize their operational profitability safely.

Common Safety and How to Increase Profitability

Loss of a Legend – And a Friend