I am saddened to report that a true legend in the automation industry, Dick Morley passed away on October 17th in New Hampshire.  Dick is one person who truly deserved the title “legend.” He invented the PLC and started numerous companies, including Modicon and Andover Controls creating jobs for thousands of people. He actually seemed to be more proud of creating the jobs than his technological contributions. He also invented the floppy disc drive, the driverless trains commonly found in airports, and ABS breaking systems, just to name a few. He founded and led Bedford Associates, a think tank focused on results that took on huge challenges and won. He was an MIT Gold Key, received the ISA Life Achievement Award, was a member of the Process Automation and Measurement, Control and Automation Association Halls of Fame, CSIA first ever Lifetime Achievement Award, was recognized by the Franklin Institute and receives dozens of other accolades. He is a man of whom I can honestly say impacted the world for the better in many ways. He will be missed by the entire global manufacturing industry. 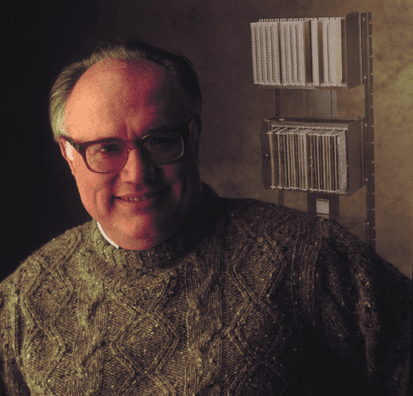 Richard Morley: The “Father” of the PLC

As a physicist by education, Dick approached problems from an elemental level, using physics principles to guide his solutions. For example, with ABS, Dick knew that a vehicle has its best braking coefficient when the wheel is nearing the point where the wheel is going to skid. So, if one can hold the wheel at that point then the vehicle will stop most efficiently. Sometimes Dick’s solutions were based on luck. Frustrated with not being able to create a viable solution for portable storage for a client, Dick “frisbeed” a sheet of paper across the table. Watching the paper spin and float across the table, Dick realized he had the answer leading to the creation of the floppy disc.

As much a geek as Dick was (you would know this if you ever attended any of his Geek Pride Days at The Barn), he understood the value of marketing and sales for any company. Dick believed there had to be at least as many outwardly facing employees as inwardly facing employees for any company to survive in a competitive market. This meant there were as many marketing, sales, technical support people in a company as there was engineers, technical, and internal management. Dick called it the sphere of company where the surface area of the sphere had to be large enough to support the hidden volume of the sphere.

Much more important than his professional and technical achievements, Dick was a good friend to many people. He often went out of his way to help others in whatever ways he could. He and his wife Shirley parented their own children as well as many foster children over the years, helping to put them on a good path. He would listen to those seeking guidance and offer thought provoking and challenging advice which would typically put the inquirer on the right path. He will be missed by his many friends.

Don Clark, Todd Snide and I would travel to New Hampshire to meet with Dick on a fairly frequent basis over the past few years. We were scheduled to meet him for lunch on Friday, October 21. This is a meeting that now has to be postponed for a while until we join him and Shirley. When we met with Dick, he always kept us on our toes and challenged us with whatever field of study he was pursuing that week. He drove the discussion. I have to admit that after 2 hours with Dick I was so exhausted by his incredible thought process that I almost could not make it home without falling to sleeping the car. I believe there should have been some type of warning about operating vehicles after meeting with Dick.

Dick brought in the era of modern automation. We spoke many times how there is a new era just around the corner for automation systems, moving away from the central control of the PLC towards more ubiquitous control spread across the automation systems. It is not that Dick could not solve this new approach, learn more “Lunch with Dick Morley and some automation talk”. Manufacturing at the point of sale is how Dick believed this new era will come in. Dick passed on some of his knowledge and taught many of his close friends how to think or approach a problem in a fundamental way. Through those of us whom he mentored, Dick’s legacy will live on and his impact on the future of automation will be felt.

As trite as this is, the world is not quite as good, or exciting, without Dick.

Lunch with Dick Morley and some Automation Talk