In my 40 years working in industry and industrial automation I cannot recall a period in which there has been so much technological jargon. Almost every periodical, advertisement, blog, article, paper, conference or website is loaded with references to the Internet of Things (IoT), the Industrial Internet of Things (IIoT), Cyber-Physical Systems (CPS), Industrie 4.0, Cloud Computing, Fog Computing, Edge Computing, Big Data Analytics and/or Small Data Analytics. It is not that the industrial automation field has not had its share of buzz terms over the years – it certainly has. The real issue is whether the extreme preponderance of these phrases springing up simultaneously might be indicative of an important technological advancement, or is it just more marketing hype during a slow market period? 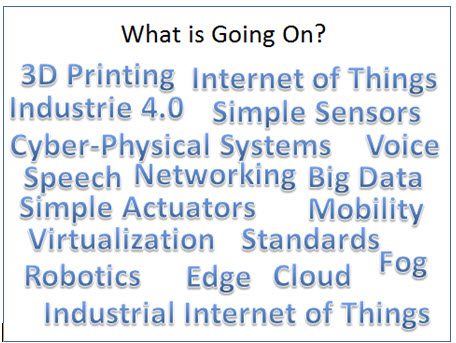 At first I was of the opinion that all of this was just more marketing hype. Perhaps one reason was that each of these initiatives initially appeared somewhat technologically underwhelming, providing a reasonably slight advancement in the state-of-the-art. Secondly, almost every one of the initiatives was focused on technological advancements without much consideration for functional improvements. Typically the true benefit from any automation advancement is in the increased functionality for solving industrial problems. The extreme technology-focus of many of these initiatives made it difficult to identify any real benefits.

The more I started investigating, the more I believed something truly significant was happening.  I felt the large number of initiatives was signaling that the automation platforms might be going through a fundamental change. More detailed research confirmed my suspicions. I found the technology that underpins the design of industrial automation systems has reached a point at which the technology itself does not significantly constrain the design of the systems as it has in the past. Traditionally, limitations in network speeds, memory size, power consumption, compute time, cost and other factors have worked to constrain the design of automation systems. As a result, automation architectures have been at odds with industrial operational and business architectures. This mismatch has made working with these systems very difficult and the cost of implementing them quite high.

The automation industry is continually seeking new ways to make automation solutions simpler and easier to implement, lower cost and higher value. Automation technology has reached the point in which system designs can perfectly fit the industrial operations and businesses. I believe this will enable new levels of control and a new and exciting era for industrial automation and control.

How Can We Make Automation Architectures fit Industry?