There are many factors that influence the energy consumption which makes it a rich source of information about the operation of the plant. Many companies choose rather than find its value to accept energy as a cost required to deliver their production.

These customers are “wasting their energy”. Are you?

To say industrial companies are wasting their energy is not to say that their process is not efficient. Improvements in equipment selection and process on industrial sites has resulted in significant reductions in energy intensity (consumption per unit of production). It is to say that they are failing to leverage the potential benefits that can be achieved by unleashing energy data within their control systems. 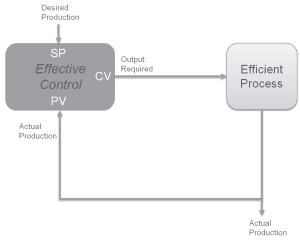 While output information is available in most control systems, it is rarely analyzed. At best, the total energy controlled by the outputs is displayed on energy dashboards to show plant efficiency. Energy information can be much more effective when brought into the automation system to ensure the efficient operation of the control system.

Adding energy data to ensure efficient operation of the control system is not about slowing production. Energy measurement provides insight on how efficiently the plant systems are operating. Doing so allows more production by avoiding downtime and lowers cost through reduction of inefficient operational periods. 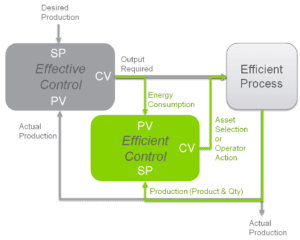 To ensure there is no loss of production “efficient control” is added as a child control loop to the existing effective control. The efficient control works by monitoring the effort which is being applied to the process for a given task and comparing this to previous expectations. The output of the controller is focused on the selection of more efficient paths or engaging the operator to resolve process inefficiencies as they occur.

Energy analysis at the automation system level removes the load on operators of monitoring energy values directly but enables the effect of many energy dashboard metrics, which are constantly monitored. It also allows timely action to be taken or appropriate people to be notified directly when overconsumption is occurring.

The impact of an energy aware control system can be seen on systems as simple as a pair of pumps emptying a sump. In this case the energy consumption is a combination of the efficiency of the pumps and of the piping system and so can detect issues across the complete system.

Energy represents the effort being used in production. Increases in effort represent current inefficiency and potential future failure. An energy aware control system leverages energy data to detect problems before traditional measurement. Shouldn’t your operation be one step ahead?