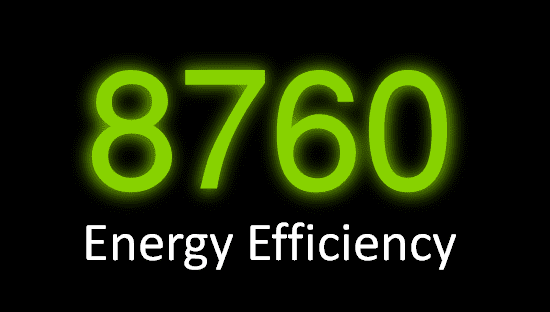 8760 is the magic number, absolutely fundamental to your energy efficiency. If you haven’t heard about it, then not to worry, it is explained below.

It is clearly evident that energy efficiency has played and continues to play a valuable role in the sustainable development of the global economy. Having spent the last 5 years in providing energy management solutions and promoting variable speed drives technology in the UK & Ireland, the OPEX and CAPEX terminology has now migrated to the total cost of ownership (TCO). Energy efficiency is now recognised as the ‘fifth fuel’, joining coal, petroleum, nuclear, power and renewables.

The best way to save power or energy is not to consume it in the first place, and that is where the term ‘Negawatt’ arises. Negawatt is a measure of energy efficiency and can be described as the kilowatt hour of energy that you don’t use. So the question arises, what should be the priority areas and applications to maximise the Negawatts savings?

As motors continue to use two thirds of all electrical energy consumed by industry, it becomes an important area to gain energy savings. The variable speed drives technology has continued to play a key enabler in achieving energy efficiency. Installing a variable speed drive on industrial motors and particularly on pumps and fans is the most straightforward way of optimising efficiency. By automating the application, variable speed control and stopping the motor when it is not needed all contributes to reduction in energy consumption.

In the case of centrifugal pumps, it is worth considering, based on British pump manufacturing association(BPMA), 80 to 90% of the typical life cycle cost is accounted by energy and maintenance cost. The initial purchasing cost is equivalent to 5% to 10% and is insignificant compared to the energy cost. From these figures it is clear that the motor initial cost is lost within the first few weeks of its operation. So it’s a no-brainer, investing in energy efficiency by using variable speed drives is a cost effective solution.

Now, back to the magic number 8760, if you still haven’t guessed…it’s the total number of hours in a year.  So how does it relate to energy efficiency? For every kilowatt you save per hour by reducing the speed of a motor and running your motors more efficiently, it could help you to achieve 8760 kilowatt-hours (Negawatts) savings annually. This is equivalent to reducing your energy bill by £652 annually (based on the electricity tariff 7.45 pence per kWh charged for a large manufacturing consumer, ‘Average UK non-domestic electricity prices Q4 2013’, published by Department of Energy & Climate change, 2014).

Off course, cutting energy costs helps to improve the bottom-line, makes your more competitive and in today’s hard times every penny saved is a penny earned.

Please feel free to share your thoughts in the comments section below.

What does “Energy Savings” mean in the industrial automation field?