I never thought my story was interesting enough to be asked to tell it. The first time I felt comfortable talking about my father being gay to people I didn’t know it was in a Diversity training session at Schneider Electric. 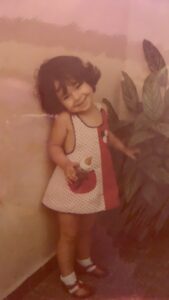 oken words, guilt, pain, and tears are common things involved in a divorce context. My mother was 29, my father was 32 and I was seven. In the post-dictatorship era in Brazil, we only could get information from radio, specific television stations and few newspapers. Let’s consider that all of that during a conservative environment and favorable to the social legacy of the “traditional Brazilian family”, formed by the man, seen as the provider, the subservient woman and the only one responsible of the children, who didn’t have a lot of opportunities in the labor market.

Expectations were high in this small traditional Brazilian family. My parents were the firstborn of their families and conceived the firstborn of both.  I’m the first granddaughter, niece, and great-granddaughter. It was the perfect family in the perfect scenario! We were in the 80s, a period when homosexuality was an insurmountable taboo, worsened by the by the feared AIDS context, known as the “gay disease”. Being gay was enough to be sure of the death from this disease.

My father was a handsome, showy man and the pride of my grandmother, who was extremely moralistic, conservative, and inflexible. An incredible woman, but with a lot of prejudiced against everyone, including herself, who was a black woman. My father always took the burden of not letting his mother down. Even today he doesn’t speak openly about who he is because it would certainly be a shame to her. The resentment inside him is great, and the emotional impacts on his life are clear as well.

I noticed my parents’ relationship change even though I was a child of about six years old. They stopped being kind to each other and my father started arriving very late a 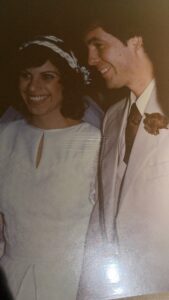 home. Your absence was clear, for a child who considered him a superhero. We had the routine of kissing daddy good night: “Mommy, where is daddy?”; “Mommy, why doesn’t Daddy have dinner with us anymore?”. I remember my mother’s hug and her words: “Juju, your father is working to support us. He will arrive and give you his kiss as soon as he gets here… you will feel it while you sleep”.

My dad didn’t walk or travel with us anymore, he just used to leave us at home on weekends and the only time I had with him was when they took me to school. We didn’t do anything together anymore and I missed him, even though we lived in the same house. I saw my mother crying a few times to my grandmother and aunts. They were always whispering, and when I approached, they said, “Juju, conversation for adults only.” I’ve always been curious and observant, so I knew something wasn’t right.

Their relationship got worse I remember they yelling to each other in the car. I didn’t understand what was happening, because despite being distant, I had never seen them like that before. Suddenly my mom yells something and my dad reacts in the same tone. I remember my mother crying, and I was paralyzed in the back seat. Although I have no more memories of that day, I do remember, however, my mother telling me that I would sleep in her room and my dad would use my bed. She justified it by saying that it would be fun. 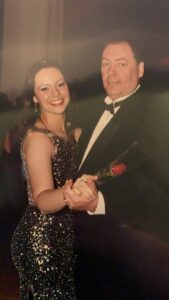 After that, I remember that we went to spend New Year’s at the beach with my grandparents and maternal uncles. My father didn’t go, and my mother used to say: “Dad is working, that’s why he doesn’t come. We will call him every day because he loves you and misses you.”

It was in this trip when I heard for the first time the word: “gay”, followed by my mother crying a lot. I thought: “gay must be something very bad, because my mother is sad”. When we got back home, I ran to my parents’ room looking for Dad. To my bitter surprise, the closet doors were opened, and everything was empty. There was no more trace of my father in the house. It was desperate, a feeling of emptiness and abandonment. I remember the pain I felt, but I also remember my mother’s strong, warm hug saying, “Daddy’s gone, but you’ll never leave his heart. He loves you, and he will love you forever. He is separated from me, not from you, daughter.” I still remember the warmth of my mother’s hug that night. We slept together in her bed.

I am not so sure how much time had passed by before I remember that I kept hearing the word “gay” and my father’s name in the same sentence, followed by my mother’s impassivity and people’s negative reaction and repulsion. It happened several times. And when I asked about what they were saying, my mother just said: “Daughter, your father is fine. Don’t worry and don’t forget that he loves you”.

At the same time, television reported the advance of AIDS, a gay disease. I concluded that my father was sick and was going to die. I still remember the pain I felt, I closed myself in my own world and that I didn’t want to see my father. My mother forced me to call him… when he came to see me, I didn’t want to see him. She kept saying: “Juliana, he is your father, and you need to love him and respect him. He is separated from me, not from you.” These words filled me inside, until one day I asked: “Mommy, is Daddy sick from a disease called “gay”? Is that why he doesn’t like me anymore? I remember her eyes watering, she hugged me and said:

“Daughter, I don’t know if your father is gay. He doesn’t have any disease called as “gay”, as this condition is not a disease. Whether he is or isn’t is nobody’s business. It’s his individuality. He is your father, and he loves you unconditionally.”

That was a winning moment in my life. My mother’s love was more important than the prejudice, the backbiting, the unimaginable pain and hurt felt by her with all this 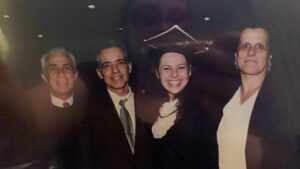 situation. It was her love that shielded me from the mean and scornful comments I heard from people referring to my father and his “friend”. I usually say that people one can give what they have. If I am able to tell my story today, if I am the woman and professional that I am, I owe everything to my mother, whose words: “Your father is separated from me, not from you”; “Your father loves you and you need to love him and respect him”, echoes inside of me even today. 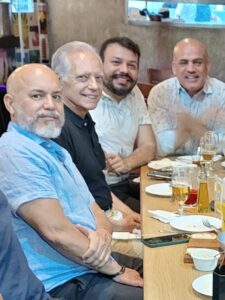 Nowadays, my parents are friends and get along well. My dad has been in a stable relationship with his husband since my parents split up. I love my father’s husband with all my heart. I nicknamed him of godfather. They care for one another and, clearly, they love each other. My mother remarried and has a peaceful and happy life. We have a great relationship as a family. My mother says that my father was the man she loved most in her life, and the fact that they did not have the “traditional Brazilian family” picture, does not create any resentment, because we are the best that we could be. She says that true love sets you free and that she continues to love my father because he gave her the greatest wealth she could have had – me. 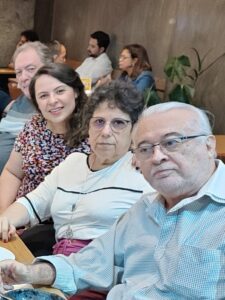 I never considered talking openly about it, after all they are intimate emotions which could traumatize me. I believe it didn’t happen because of my mom. She preferred the path of love and understanding, rather than the prejudice and pain. And it was only at Schneider that I found a respectful, safe and open environment to tell my story. Here, we can be who we are, counting on people in a genuine way and delivering our best. We have the opportunity to live our corporate values ​​and #SEGreatPeople daily.

Here, we turn words into actions, build trust and really seek to make a difference in the world. Thank you, Schneider, for giving me the opportunity, through my life, to be part of this journey of awareness always looking for the real inclusion, equality, equity and respect for diversity. #SEGreatPeople #EmbraceDifferent

To learn more about Diversity, Equity, and Inclusion at Schneider Electric, visit our website, www.se.com/diversity 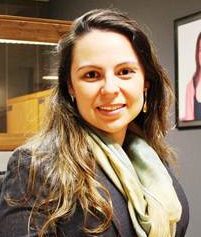 Juliana Breno is the Regional Compliance Officer for South America at Schneider Electric. Juliana’s passion is in adding value in everything she does and leaving a positive legacy wherever she goes. She believes ethics and integrity is the fundamental stone to making the world a better and more sustainable place for everyone. Juliana’s career has spanned legal, M&A, contracts, Forensic Services, regulators monitoring and fraud investigations in high profile cases investigated by regulators across the world. Juliana has worked at Schneider since early 2019 and is in charge of implementing the Ethics & Compliance Program in South America. She loves reading, traveling, making new friends and is engaged on the animal rescue cause in São Paulo, Brazil, where she lives.