I would like to acknowledge how fortunate I am to still be working and in good health. I have certainly been very lucky, and my heart goes out to those who have been affected by COVID-19.

Coming first in a marathon is no easy feat… Even if you’re the only competitor! So technically, in the inaugural ‘Schneider Electric East Melbourne Marathon’, I won AND lost. Neither of which I expected would happen when planning to run the Schneider Electric Paris Marathon in April 2020.

Having run the City 2 Surf last year (a 14km run across the city of Sydney), I found myself enjoying the training and discipline, followed by the nervous energy of race day. I was keen to keep up the momentum and take on an even bigger challenge: The Schneider Electric Paris Marathon – 42.195km through some of the most spectacular sights and famous streets in the world.

So, I began to prepare. Waking up early, fitting in training runs, planning nutritious meals. I even left an event early as I had a big run planned for the morning. That’s when I knew I was getting serious!

I joined a Schneider Electric sustainable running community called SE Green Runners where I found tips, encouragement, and fellow competitors all training for the big day.

With flights to France organized and accommodation booked, I officially submitted my application to run the Paris Marathon. 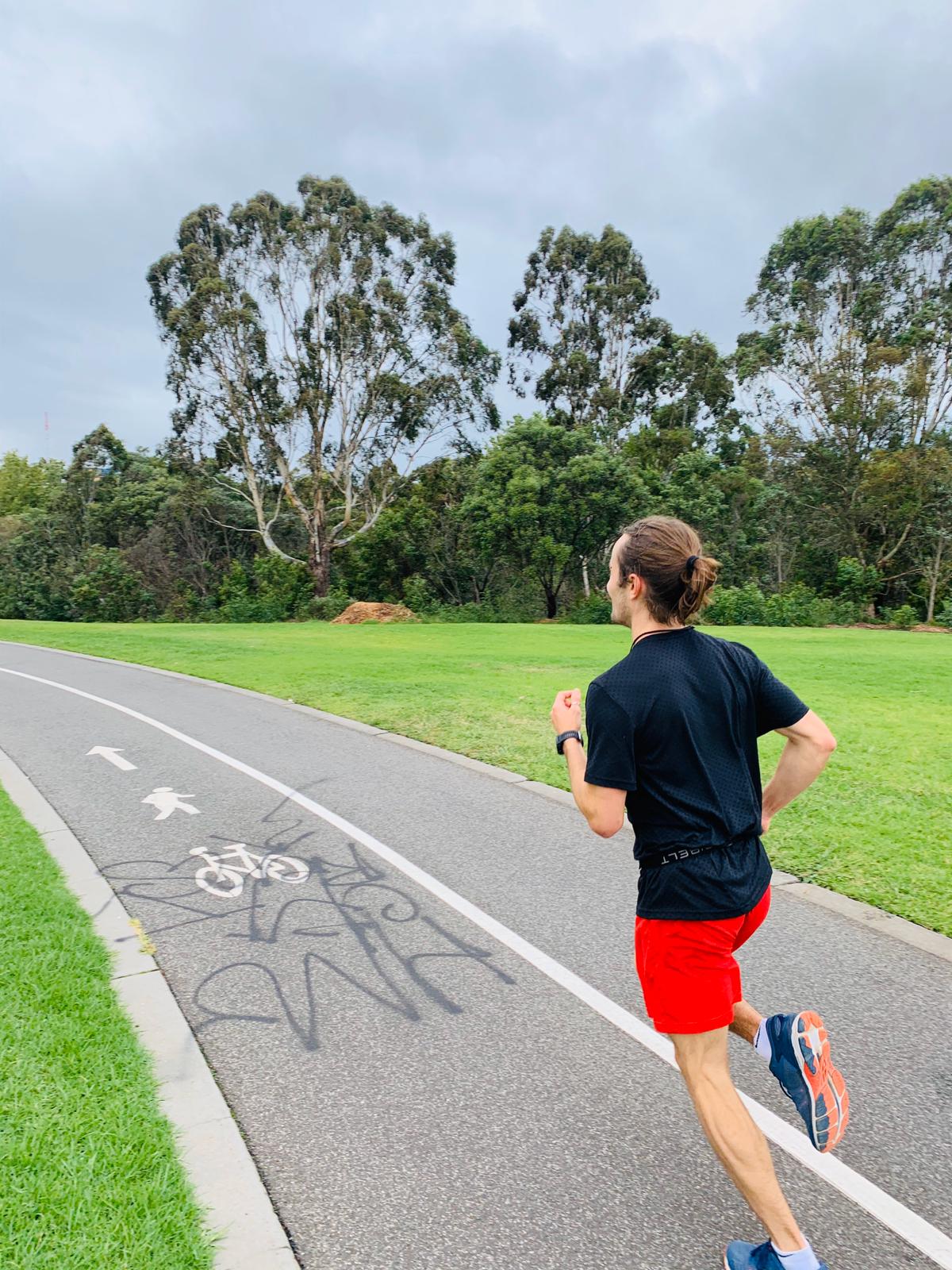 The first red flags began to fly in March. The mystery virus, originally reported as a minor outbreak in China, started to become a real cause for concern as it began to spread. Nevertheless, France seemed relatively unscathed at this stage so I continued my training schedule, fitting in runs most days and staying focused on the goal ahead.

But things changed rapidly. It was disappointing to receive the news that the event was postponed. By now the global situation was serious and while there were more significant events occurring around the world, I was nevertheless upset!

When you commit to a worthwhile goal, it requires an investment of time, energy, and focus. Giving yourself to something and having it fall through is naturally disappointing.

What will I do? Would the event be postponed, could I compete next year, or in a different race? Should I keep up all the training or go back to bed? I must say, the bed looked like a good option.

Mulling it all over for a time, I came to a realisation. Why am I really doing this marathon? So that I can jog around in Paris?

No, because it’s hard. Because I can push myself to take on a challenge and grow as a person.

I could:
A) Accept that it is an unfortunate occurrence; disappointing but ultimately out of my control, eat some milo cereal and perhaps try again another time
OR
B) The next day, I wake up early again and hit the road on my regular 10km run. Later in the week, I’ll train again. And on April 6th I’d run a marathon just as I’d planned. 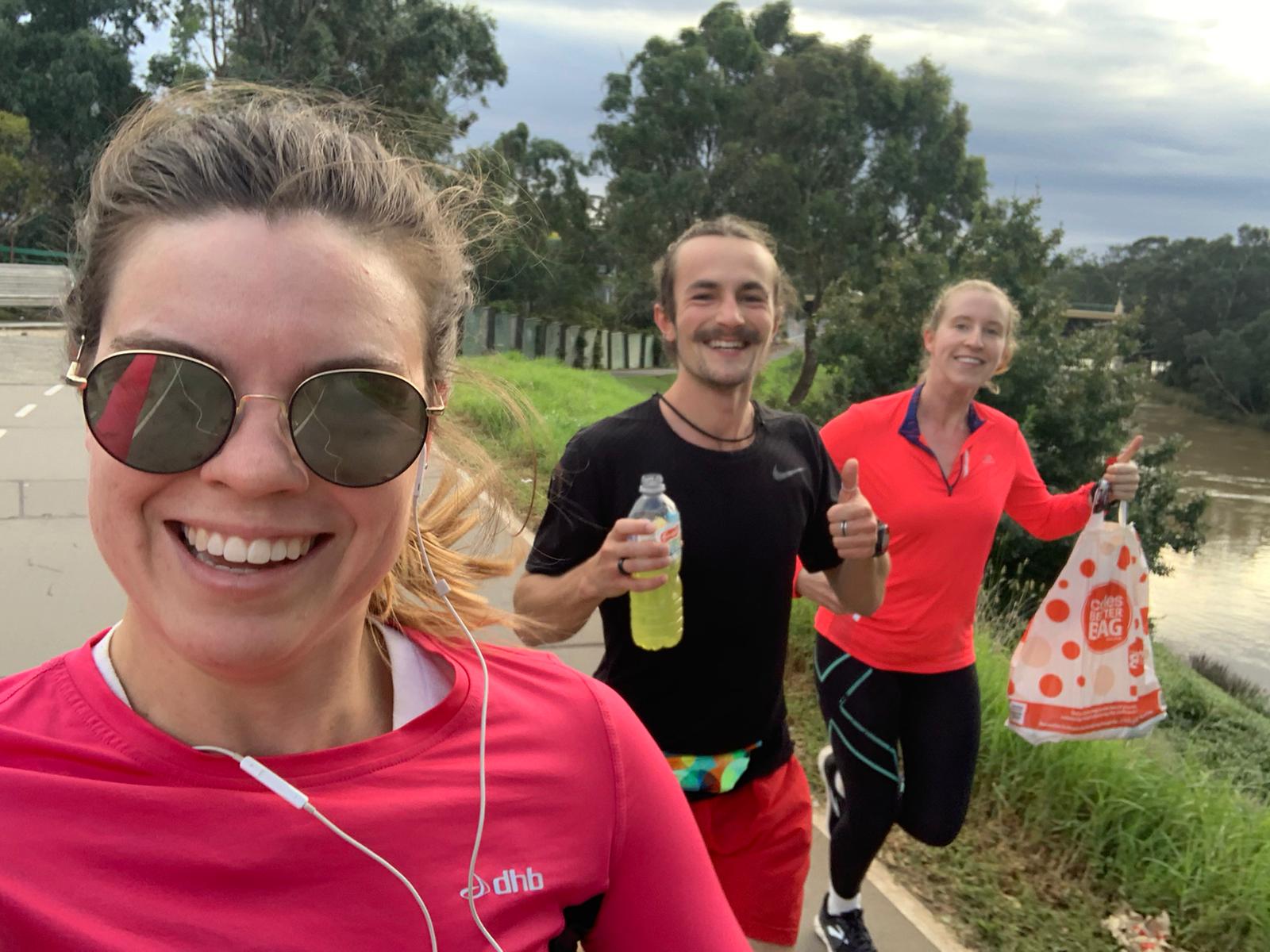 5:30am. April 6th. East Melbourne.
The pre-race nerves mean my morning cereal doesn’t taste quite as good as usual, as I pack my running pouch with energy gels and jelly snakes.

6:15am. Starting Line. 42km to go.
I can see my misty breath in the air, stretching tight legs as dawn breaks in East Melbourne. No starting gun or weaving between competitors to begin the race, just a deep breath, and a steady jog to start the run.

10km in.
I can see my friends (and support team) Jess & Jess just down the road. Relief. They refill my energy supply with well needed Gatorade and gels. Without their encouragement, support & smiles as my aid-station-on-wheels, I never would have made the distance.

Halfway.
By mid-race, things were going well. Legs were feeling good and I was well hydrated. But I was in for a surprise. Good weather on the way out meant tough weather on the way back. The morning weather reports didn’t mention the strong headwinds that were growing as the day went on.

10km to go.
I hadn’t realised how strong the buffeting force of the wind could be, especially halfway through a marathon. It was quickly wearing me down. Water bubblers seemed further & further apart as the sun began to emerge from the clouds. With 5km to go, my energy was running out…

4km – Dodging prams and bicycles, I fought to keep up the pace. 3km – Through the park, staggering up the hills, crossing roads. 2km – Glancing at my Garmin watch every few seconds, the thought of finishing keeps me going. 1km – Energy depleted; finish line in sight. People often describe the last 5km of a marathon as being tortuous. After finally finishing the race and collapsing on a riverbank, I would agree. But I would also recommend it. 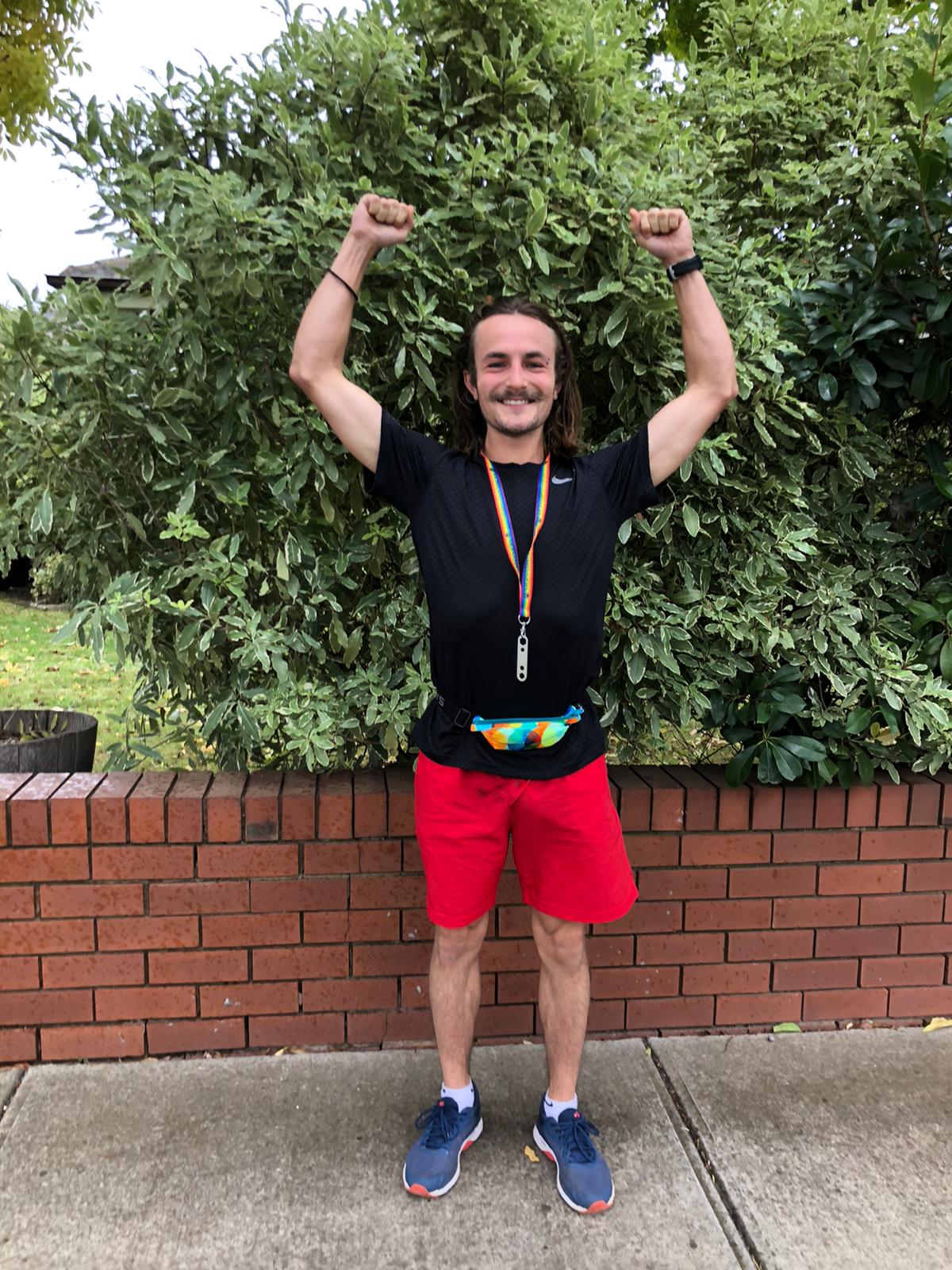 Sinking into the couch, immobilised, I began to reflect on why I’d chosen to participate in the first place.

✅ Yes, to tick a box on the bucket list.

✅ Yes, to improve my health and fitness.

✅ Yes, to be part of an exciting event in a beautiful city.

Those are certainly rewarding pursuits. Ultimately, however, it’s not about the event itself but what happens to you – on your journey to get there. The focus and effort you apply to put yourself in a position to succeed. The learning and growth that results from your experience. That’s what counts.

For this journey, that was:
– Developing a consistent training routine (and sticking to it!)
– Improving my cardiovascular health and endurance
– Working on my mental strength and discipline

To me, that’s what the achievement really was. And to be able to run the full 42.195km in the beautiful city of Melbourne was just the icing on the cake.

I didn’t run through the streets of Paris for the marathon. There was no Arc de Triomphe, Louvre, Notre Dame, Bastille, or Eiffel Tower. No running along the Seine. No French crowds singing. But the same feeling was there: achieving that personal goal you’ve worked hard for, knocking down a significant barrier to get it done. That feeling was enough to go the distance.

Schneider Electric promotes flexibility and work-life balance to ensure your personal life and work-life are just as fulfilling. If you’re interested in a flexible career path, visit our careers site to see opportunities. www.se.com/careers 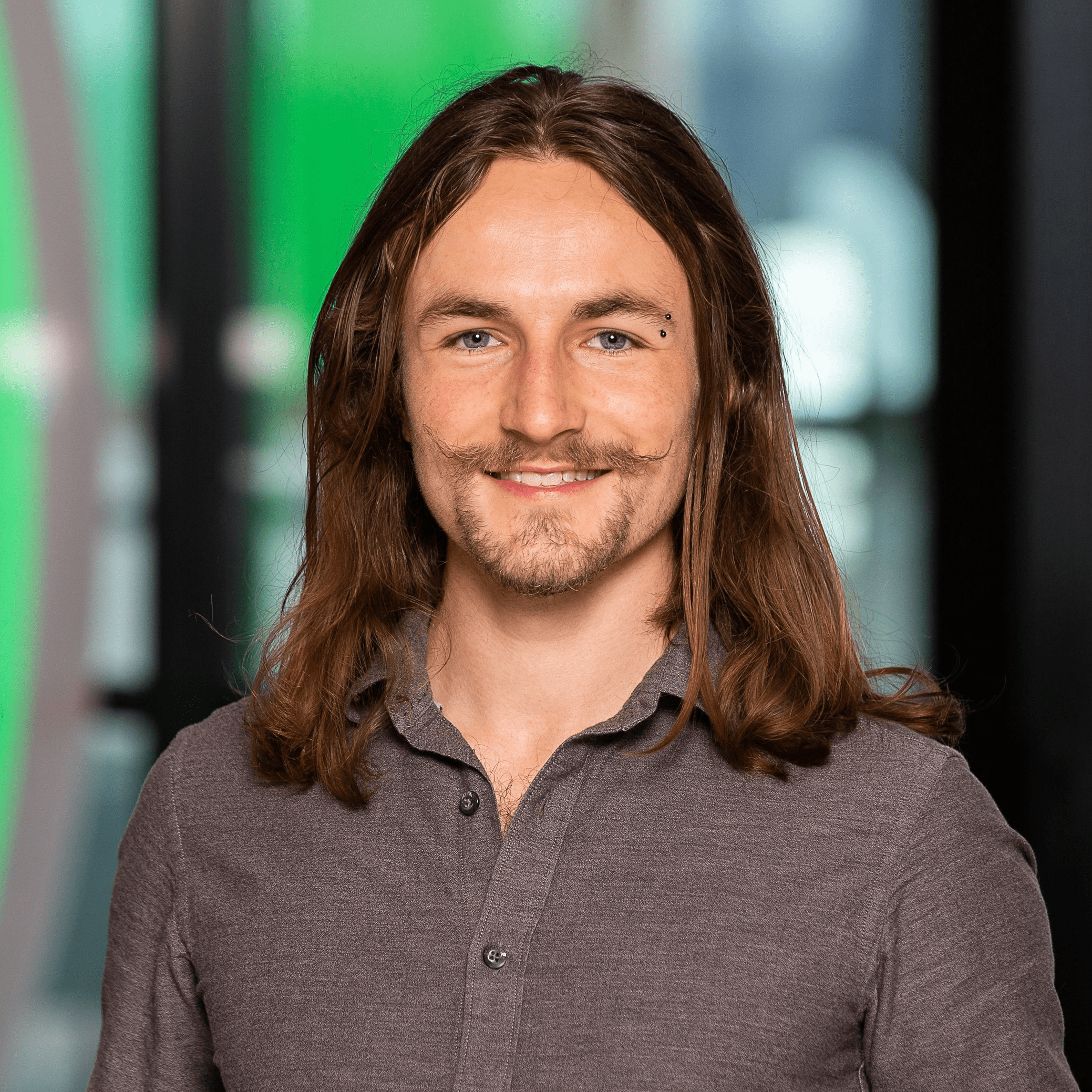 G’day! My name is James, a Digital Solutions Architect in the Field Services Team here in Sydney, Australia. During my time in the Graduate Program, I’ve had the chance to work in both technical and commercial roles within Schneider; in Digital Buildings, Power Systems, Industrial Automation, and finally Field Services. The Graduate Program has allowed me to broaden my experience and network in the business, helping me figure out what career path is right for me! In my spare time you might catch me playing guitar, practicing Spanish or playing ultimate frisbee. Please feel free to reach out and connect on LinkedIn!

Energy Management: It’s a Marathon, Not a Sprint

Is your plant running efficiently enough to win a marathon?