Hi! We are Angie Redondo and Jorge Polo, students of mining and metallurgical engineering at the National University of Colombia. We want to tell you about our experience participating in an innovative student competition, Schneider Go Green 2020, and how we managed to become the winners! 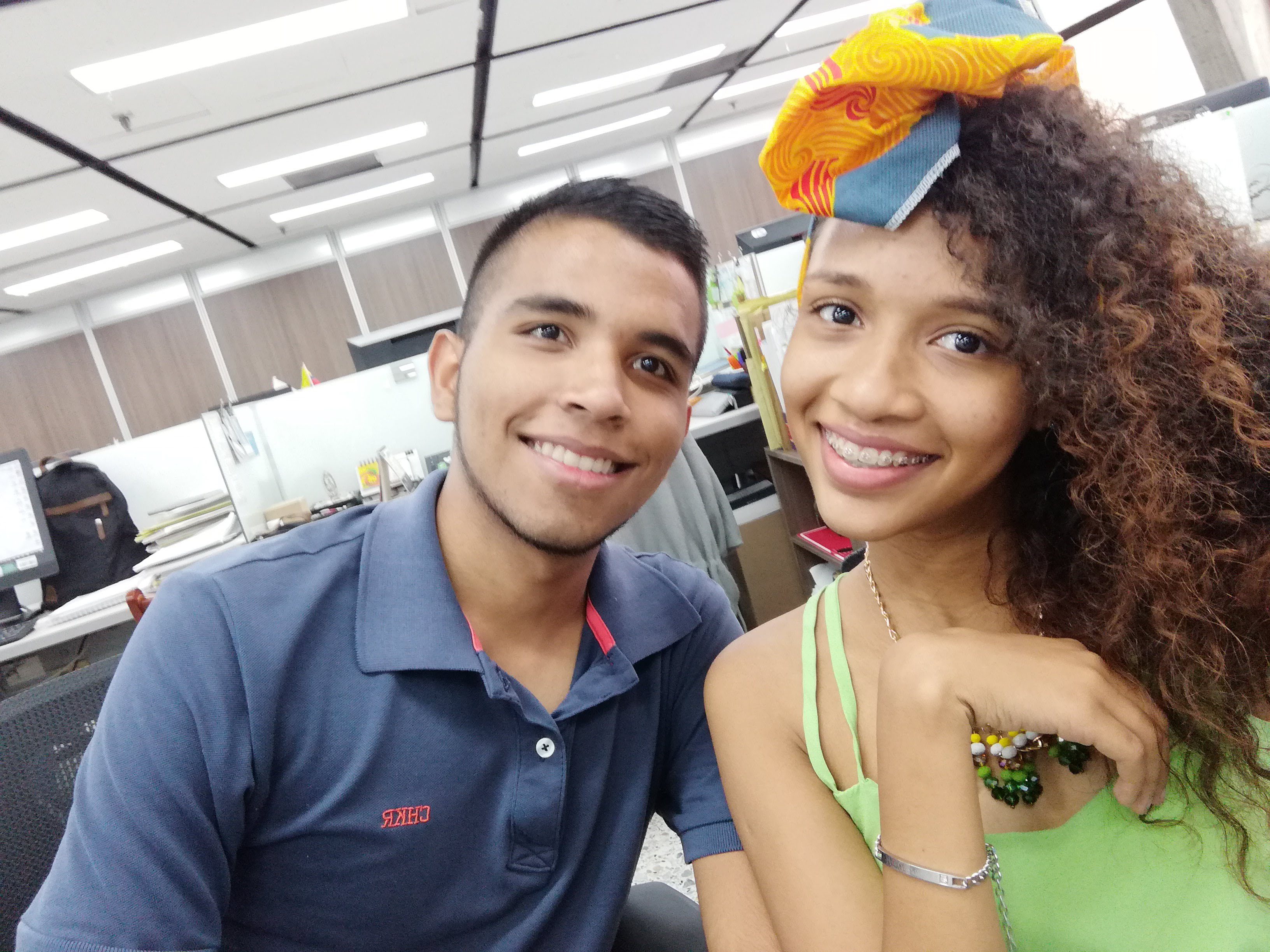 We want to start by telling you a little bit about us, we became very good friends since we started studying at the university, and as time went by, together with 5 more friends, we formed a great family.

At the end of 2019, both of us were doing our professional practices in the same company, and it was just in those months that we found out through a publication made by the University on Facebook, about the innovative competition, Go Green, hosted by Schneider Electric which besides giving us the possibility of traveling to Las Vegas for the finals, it would open the doors to develop a project that could positively impact our country, Colombia. We registered very excitedly, but we did not expect to win because we knew that the other participants would be very talented and have great bold ideas as well.

The first challenge was to develop an idea that would meet the objectives of the innovative competition and that would adapt to the needs of some region of Colombia. That is how we decided to participate in the category of sustainability and access to energy because in our country we have areas where the coverage of the electrical energy service is deficient.

We were thinking about innovative ideas all the time, but since none of them convinced us 100%, we were demotivated and thought about abandoning the competition. Our family and friends told us that we could not let the opportunity pass us by, because we were going to be able to find a great idea. So there was a time when everything we saw, heard, or felt, we tried to turn into ideas, until with only two weeks left until the deadline something unexpected happened. It was a working day, and at lunchtime, we decided to go to a different place than usual, a restaurant that offered typical dishes from the Colombian Pacific, and we both ordered fish. When we finished lunch a question arose: How can we take advantage of the fishing potential of the country? And with a twinkle in our eyes, we knew that this question was the seed that would give way to the appearance of our idea. 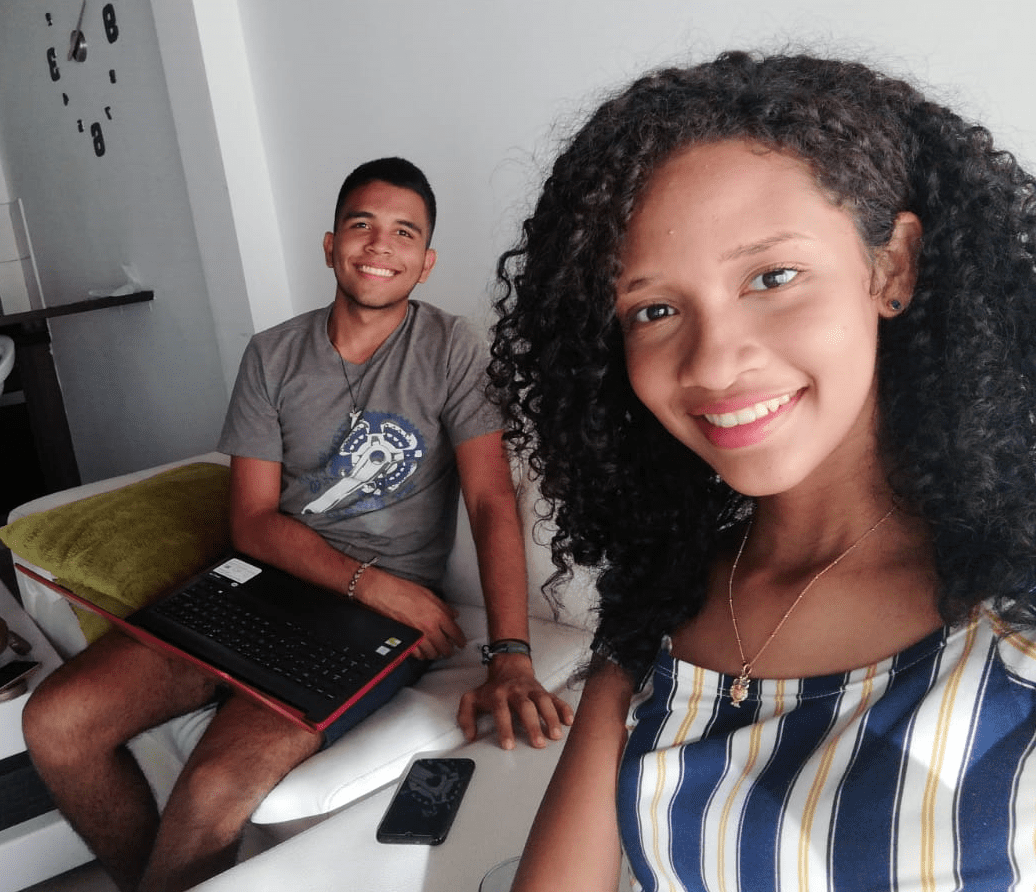 It only took a couple more meetings to shape the idea and send it out; in those meetings, we were really excited to work on a project that we completely fell in love with.

When we finally submitted the idea we were satisfied with our work, however, we did not have enough confidence in ourselves to believe that we would be regional semi-finalists. In spite of this, the desire to meet the semi-finalist teams grew more and more, because deep down there was always a flame of hope that never went out.

When we found out that we were selected as one of the eight teams, we were very surprised, we really didn’t expect it. Then happiness became the protagonist of the rest of the day in spite of not being able to celebrate together because of the quarantine. At that moment we felt truly proud of our work and motivated to give our 100% in the next stage of the competition. 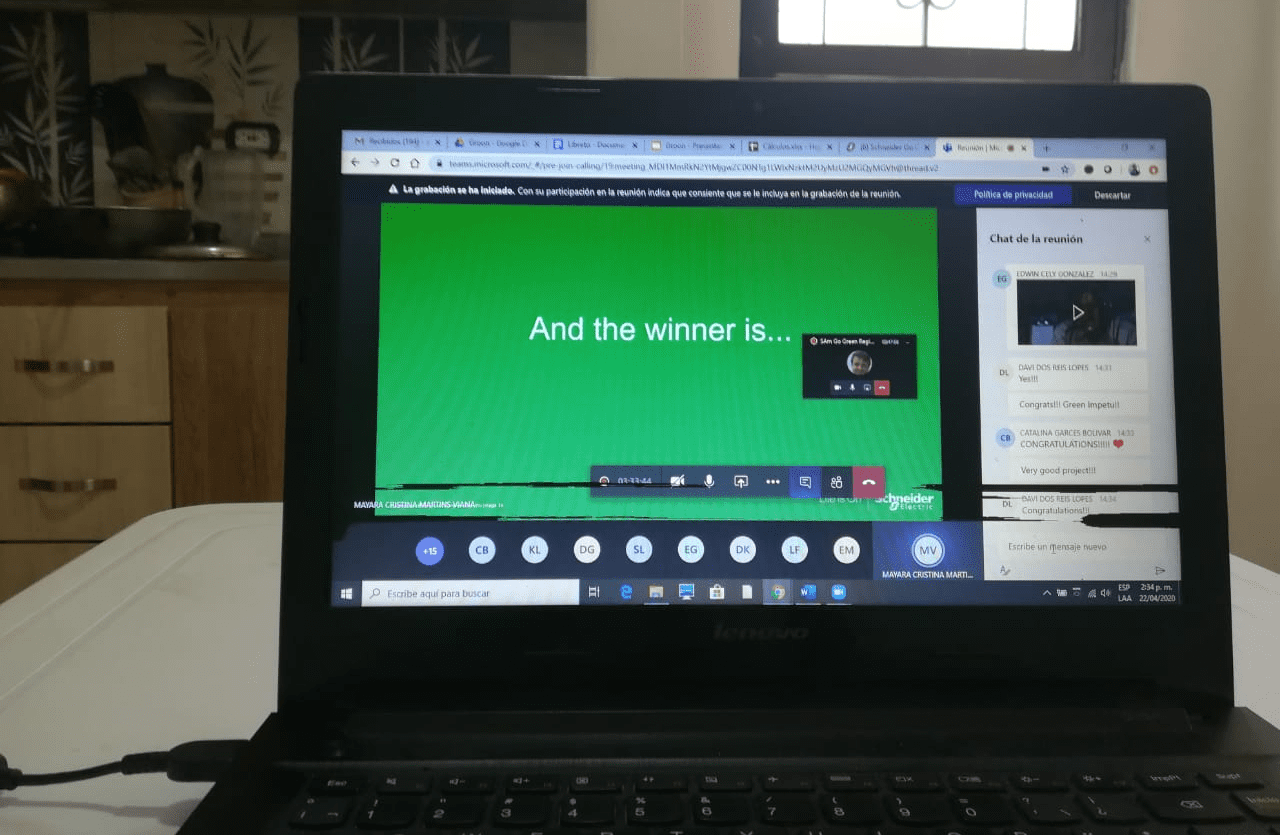 Now it was time to complement the project with the help of our mentor, Daniel Garrido, a general manager at Schneider, who was a great support because he helped us to focus the project according to the criteria of the competition and filled us with confidence to face the presentation of the semifinal.

For two weeks we were practicing daily through video calls how our presentation would be. During that time we went through a roller coaster of emotions. Many times we thought we had in our hands a good project with all the potential to win, but then we doubted ourselves and thought it would not be enough, and the nerves for not handling English perfectly grew more and more. However, we never gave up and focused on practicing daily to strengthen the presentation.

On April 22, 2020, the semi-final event took place virtually, all the teams made their presentation without any problems, each one presented impressive ideas, and we all showed our commitment to the competition and our desire to be the finalists. We were very nervous when the jury was going to give the verdict, first, they said the third place and it was not us, then the second place and it was not us either, and when they said the first one, what a surprise, it was Groon: Sustainable Fishmonger (our project). At that moment we only felt immense happiness, our hands were shaking and our words were not coming out, it was an unforgettable sensation. 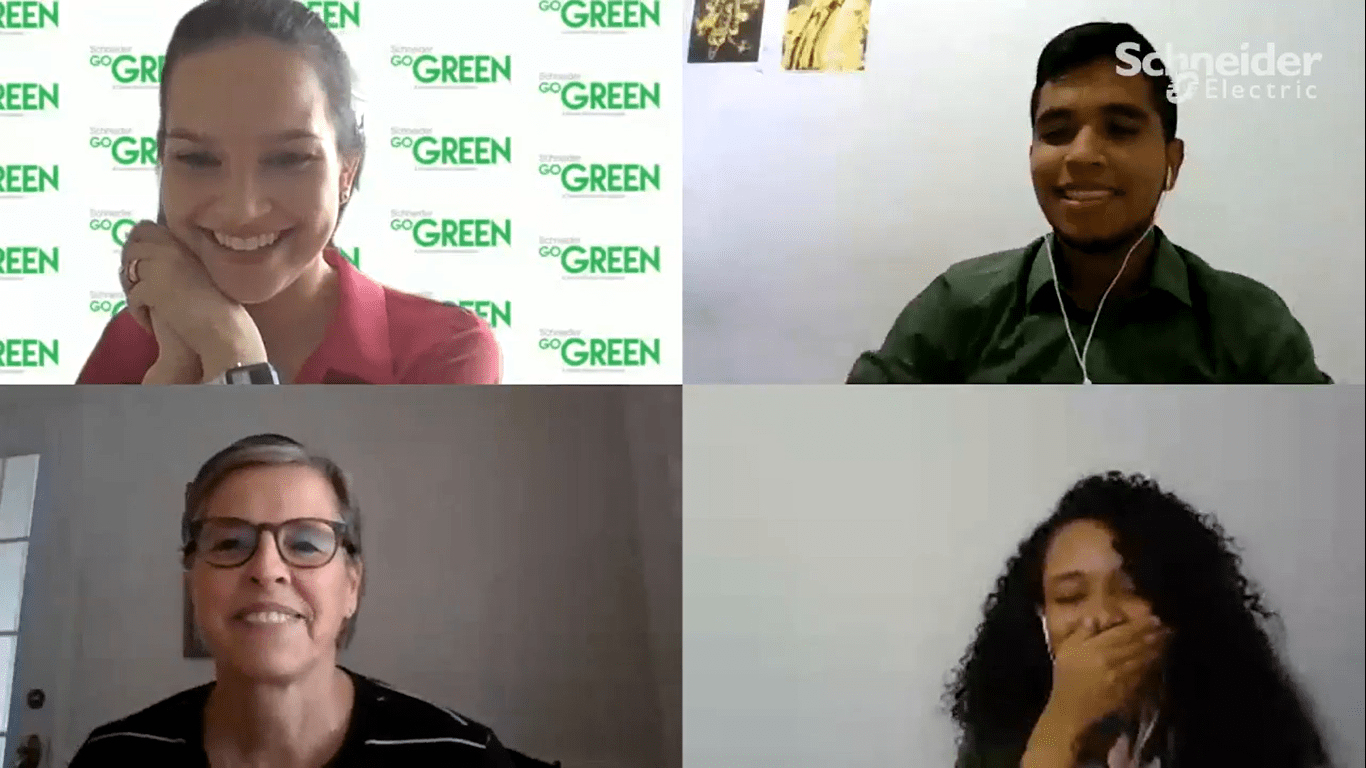 After this our preparation for the final event began, and we were very proud to represent South America and also excited about the trip to Las Vegas. But the uncertainty began, the Covid-19 stopped the world and the finals of Go Green. When we learned that the event would be held virtually, we felt a little frustrated, but that was not going to stop us, so we continued preparing with more enthusiasm, we even received help from professors at our university. The motivation we felt at that time was unstoppable.

September 10th was the big day, the final. At 3:00 am (Colombia time), even with the dark sky and our houses in total silence, the final started, this time with more experience, we were confident in our project and felt calmer, although the emotion and the desire to win made us a little nervous. Our turn came, time passed very quickly and it is impressive to see how a job that took us months, became 15 minutes.

The verdict took a little longer than expected and by that time our families were awake and eager to hear the results. We remember very well when Nathalie Marcotte, President Process Automation at Schneider Electric, started to speak, at that moment we did not expect her to announce the winner, it was a great surprise when she said the name of our team: Groon sustainable fishmonger! Immediately our families ran to hug us, it was very difficult to hold back the tears! And the best thing about the event being virtual is that we were able to celebrate together with our family.

Finally, we want to thank the entire Schneider Electric team for the opportunity to participate in such enriching events like this one, and we also want to motivate all students to participate in the next editions of the competition, because if there is something we have learned with all this, it is that we are all capable of achieving whatever we set out to do.

Sign up for the 2021 edition of Schneider Go Green! It’s an experience of a lifetime that presents a lifetime of opportunities for your future. This year’s competition is in collaboration with AVEVA and the winning team can win a trip of their choice to any of these locations: Boston, London, New Delhi, Paris or Shanghai! Register here for more information! https://gogreen.se.com/en 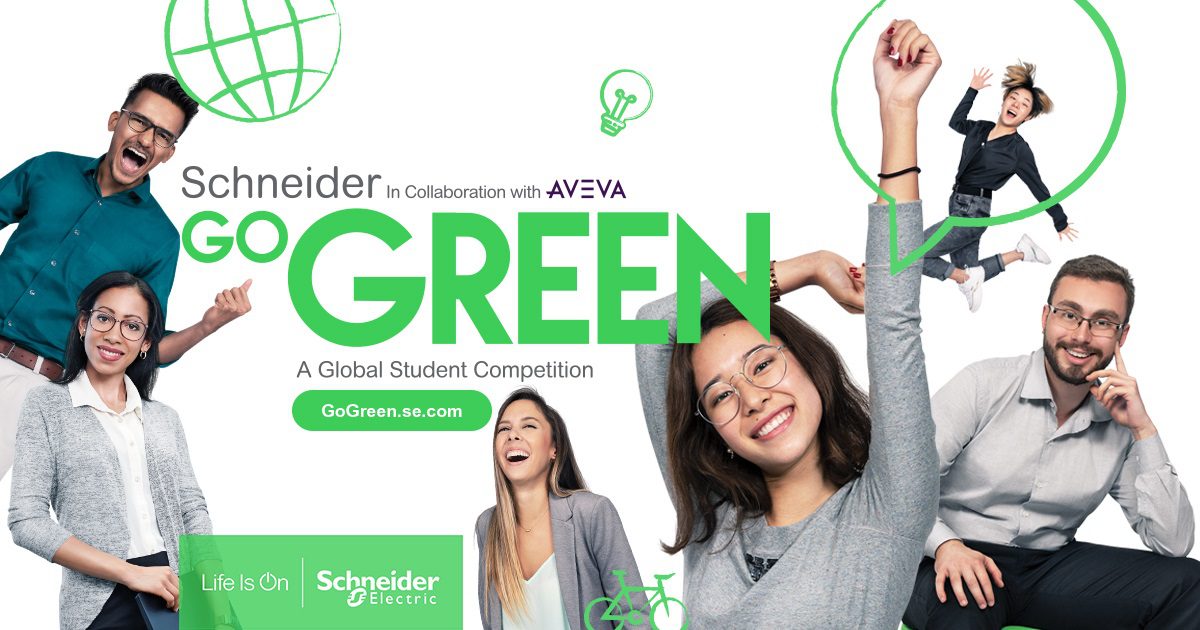