I grew up in Peasticks, Kentucky never having eaten a slice of pizza.

Well, in fact, I hadn’t even eaten a tomato! There was absolutely no reason for this because my parents grew the biggest and freshest tomatoes in our garden and ate them like apples regularly. Perhaps the thing I was afraid of most was trying something new? The fear of the unknown was an idea that was ever-prevalent in my life as a young boy in Appalachia – and as the grandson of tobacco-growing tenant farmers, nothing was ever guaranteed.

By the age of 12, I knew that I was gay. School-mates, and even some adults, had used the confusing word in reference to me and there was one thing I knew; they didn’t mean it as a compliment. In our rural town, though, the men and women that lived openly were cast out of the small social circles, so from an early age it was apparent what would happen to anyone that wanted to “try something new.” After graduating from my community high school, I determined that to be able to live my life openly and authentically, I needed to leave the town of Peasticks.

When I completed my coursework at the University of Kentucky, I left not only with a degree but also a greater sense of self. Not to mention I added a few more foods to my diet (plain pasta, spinach, eggs, just to name a few.) However, as I came to narrow down what lies ahead in my career, a wave of fear came over me. At that time in 2013, only four cities in the state of Kentucky had non-discrimination acts. This meant, that if you lived or worked outside of those areas, you could be terminated from your job for being gay.

This had an extremely profound effect on me as a burgeoning professional. I had worked so hard in my early adult years to find comfort in being my most authentic self. Now, that growth was about to be stripped away as I prepared to venture into the working world.

On the morning of January 24th, 2014, I received a call from a hiring manager at Schneider Electric saying that they wanted me to interview for a position located in Costa Mesa, California. I had never even been west the Mississippi River, and I wondered if I was truly ready to move that far away from everyone I knew. After reading about Schneider Electric’s Diversity and Inclusion policy, I was cautiously optimistic.

During the interview process, I could feel how open and accepting everyone was and that made me feel safe.  Because of that, I felt confident to make Schneider a part of my future and made the decision to move to California. In my first week there, I tasted an avocado for the first time – and it was fantastic! 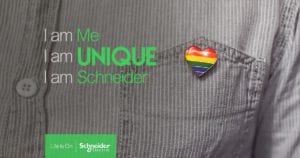 Fast forward 6 years, Schneider Electric is truly integrated with my life. With their commitment to diversity and inclusion, people like me can develop their careers without the fear of hiding parts of themselves. Rather, they feel like their authenticity enriches the company.

I’ve learned that what makes me unique also makes me valuable to Schneider Electric’s culture.

…And if you’re curious about my current relationship with food… Earlier this year I was out with some colleagues for dinner and they asked me to give tomatoes another shot.  I had spent 26 years of my life being the guy that had “never eaten a tomato.” Was I ready to give up that badge of honor? After moving to 5 different cities around the United States with Schneider Electric, “trying something new” was a feat I had already conquered. So, I grabbed the slice of tomato and ate it whole. 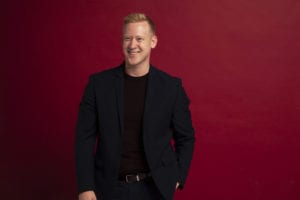 James Hawkins is a Microgrid Program Deployment Manager at Schneider Electric.  He started his career as a Project Coordinator intern, and has since held several roles including Inside Sales Consultant, Account Manager, and Power Systems Engineering Project Manager. 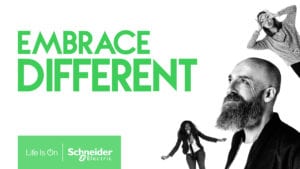