So how can we develop our next generation of problem solvers?

Personally, I believe organizations like FIRST Robotics are the best solution to truly create the problem solvers of the future.  FIRST engages young girls and boys to work collaboratively to solve problems.  Their robotics programs begin in grade school with Legos, up through high school where students build and program 100+ pound robots.  But it’s more than just robots.

“I don’t use kids to build robots. I use robots to build kids.”
– Dean Kamen,
Founder of FIRST Robotics

FIRST is a global program, with 550,000+ students in over 100 countries.  FIRST unites students of all cultural backgrounds on the laws of physics, math, and science.  It provides a playing field where they can work together, teach other, and come to a solution based on these scientific principles. 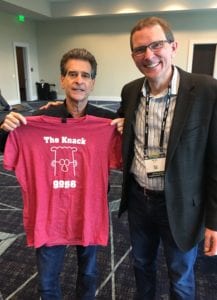 Dean Kamen, founder of FIRST, and I

FIRST Robotics, where FIRST stands for “For Inspiration and Recognition of Science and Technology” was founded in 1989 by Dean Kamen.  Dean has held many titles over the years including serial inventor, owner of 440 patents, inventor of the Segway, inventor of Slingshot, inventor of the I-Bot, and founder of DEKA Research & Development.  Dean connected with Dr. Woodie Flowers (MIT emeritus professor) because he saw a great gap in the supply of STEM educated students with the demand of these positions in the coming future.  He also saw the US schools “overly” celebrating athletics and NOT celebrating academics.  So, he devised an organization where “all participants can turn pro” and FIRST Robotics was born.

My Involvement with FIRST – “A Family Affair”

I became engaged with FIRST in 2001 when my then 9-year old came home from school and said we needed to start a FIRST Robotics team… with Legos.  I became the lead mentor and my long term FIRST relationship began.  My wife also became involved, and our 3 sons all became very engaged with FIRST and ALL say their experience with FIRST was a critical part of their choice to become engineers:

I joined Schneider Electric in 2015 and early on found a couple of our VERY passionate FIRST mentors.  We realized that for Schneider to remain competitive in the talent market, we MUST be engaging these “future colleagues” at an earlier age. 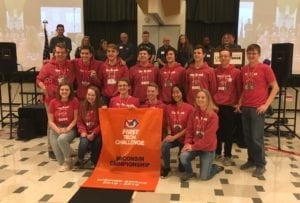 The Knack team with their Inspire Award at the Wisconsin Championships

Companies Should Be Involved in STEM Organizations

I can think of many reasons why companies should be proactive in engaging young leaders to pursue an interest in STEM.  From a business standpoint, an affiliation with FIRST strongly promotes our company brand (globally), generates strong awareness with students about Schneider Electric and our focus in the STEM fields, and draws us very close with key customers.

But the reason to be involved goes far beyond brand promotion. Schneider is committed to sustainability and carbon neutrality.  We believe meaningful action is the only path to a sustainable world.  Every day we’re reminded of the urgency of the climate crisis and inspired by those who are rising to meet the challenge head on.  Limiting global temperature rise is essential if we are to avoid widespread, disastrous ecological problems.

And these massive global problems are why we need talented, smart, STEM educated women and men to help solve them.

Concrete, meaningful action is the only successful path to create a healthier world, and that is why programs like FIRST are so important.  We need to educate these children, our future colleagues, to set them up for success, and inspire them to innovate, create, and build a more sustainable world. 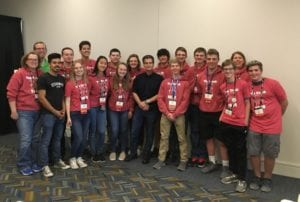 When I joined Schneider, we began to search out other mentors to get involved with FIRST.  When Schneider began officially sponsoring FIRST in 2016, we sponsored 16 teams.  Over the years our monetary support and our number of sponsored teams have grown.  In the 2018-2019 school year, we donated $150,000 to over 46 teams, a 64% increase over the prior year.

Here are just a few great stories of our teams:

I am proud that our Schneider Electric involvement continues to grow.  My aspiration is to increase our total # of sponsored teams to 75 in the 2019/2020 season with an investment of $200,000+!

The Future of FIRST 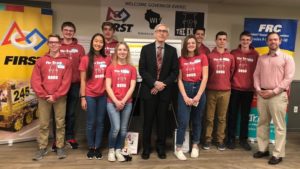 Governor Evers and The Knack team

I believe strongly in FIRST which is why I have been so involved for the past 18 years.  I believe it is one of the best organizations to a) educate and develop our future colleagues, b) highlight our company and the great work we are delivering as the US energy landscape dramatically changes and c) engage with our Schneider Electric mentors!

Investing in SCADA for a bright industrial future