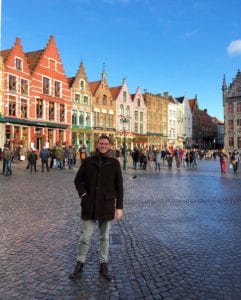 I grew up and went to college in a very conservative part of the country. At that time in my life I was purely focused on getting good grades and pursuing a career that would bring me fulfillment. Also, hopefully a lot of money because life isn’t cheap! (Thanks, Friends for skewing my ideas on how much a carefree New York lifestyle cost….)

During this time, I didn’t make time for that other part of me. The part that felt different, out of place and hungering for affection. Put simply: I was just really lonely. I’m a social person so it was easy to focus my energy on my relationships with friends and family. Really anything I could do to occupy myself, so I didn’t have to face the fact that I was holding back an important piece of myself.

I rarely shied away from a challenge even as a kid. However, I wasn’t yet ready to take on this challenge – especially during the ‘90s when LGBT+ representation was only portrayed as exaggerated stereotypes in media. It would be a long time (not until I was 24 years old) before I felt comfortable coming out to my toughest critic, myself.

Reflecting back, I have grown so much professionally and personally since starting at Schneider Electric over 5 years ago.  When I started at Schneider in West Kingston, Rhode Island, I was excited for all the potential possibilities for professional growth. True to my nature at the time as a goal-oriented fresh college grad, I ignored anything to do with my personal life. My goal was to climb the corporate later quickly and nothing was going to stop me, especially my sexual orientation.

Almost immediately after joining Schneider, I was confronted with a huge cultural shift compared to where I had just come from.  The company culture was much more open and inviting to those who were different. For the first time in my life I felt like I was in a safe place where I could truly be my authentic self. I came out first to myself, which was the hardest person to gain acceptance from, then my closest coworkers who had become like family and then finally everyone back home.

“The company culture at Schneider Electric was much more open and inviting to those who were different. For the first time in my life I felt like I was in a safe place where I could truly be my authentic self.” 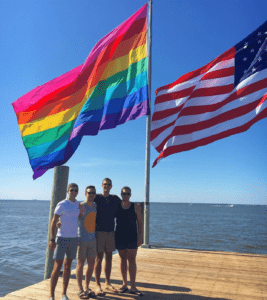 I’m fortunate to have had a great coming out experience. Not only was I accepted in my personal life but also in my professional career. In fact, Schneider Electric celebrates all our differences and that’s incredibly important. Not many people realize this but in the United States currently 26 states do not expressly prohibit sexual orientation or gender identity discrimination in employment. Meaning you could be fired for just being you and it’s not against the law. When large corporations like Schneider Electric promote LGBT+ initiatives, it sends a very powerful message to those who feel scared to be their authentic self. Messages of acceptance are what give people hope and foster a more tolerant world.

Two and a half years into my career I became a manager over the Service Sales department. I was completely out and proud of it. I didn’t realize at that time that I too was sending a message. I was approached shortly after my promotion by a colleague. He was from a different department and we had rarely ever spoken. He congratulated me on my new role and how I’d progressed so quickly. He also took a moment to express his admiration for me doing all this while out and being true to myself. 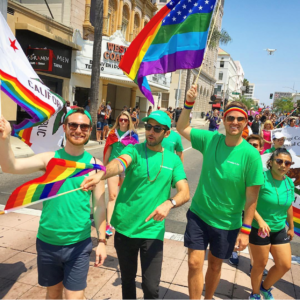 So often in the queer community you encounter individuals who feel compelled to wear a mask. In some unfortunate cases, especially abroad, it can mean life or death. That’s why I’m so proud to work for a company where I don’t have to fear who I am. I can focus on developing my career goals. I am happy to say that shortly after that encounter, my colleague who had congratulated me earlier came out to everyone in the office. By simply being who I was, I progressed my career quickly and gave assurance to those who still had some trepidation to show who they really were. Schneider and subsequently myself are leading by example in how you should be your true uninhibited self. Living your most authentic life allows one to be truly happy.

June is an incredibly important time for the LGBT+ community. This is the time of the year where we celebrate our queerness. It’s a time of education, reflection & hope for a better tomorrow. I am proud to work for a company that promotes the LGBT+ community. Schneider Electric is the leader in our industry not only because it’s best in class for our products and services but also its social responsibility to our planet. I hope everyone around the world regardless of sexual orientation has a happy and safe pride!  🏳️‍🌈 #LifeIsOn 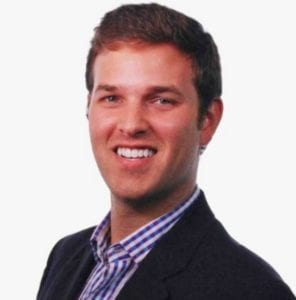 I am a Business Systems Analyst at Schneider Electric.  I currently live in Los Angeles, California but am from Houston, Texas originally. Schneider has relocated me to Rhode Island, California & the Philippines. I’m an avid traveler, skier, hiker & love all things beach-related. My job falls under Schneider Digital and I’m the liaison between the Service Sales Business in North American & Global. I make sure Service Sales North America has representation when implementing software changes globally. 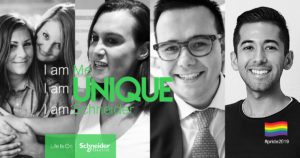