At Schneider Electric, our employees have many passions outside of their typical day jobs.  Our employee Alex was recently was a contestant on a popular game show!  We invited him to share his experience in our blog.

Family lore holds that the phrase – the iconic opening line from the TV Game Show “The Price Is Right” – is the first complete sentence I spoke as a child. And If you’d asked me as a six-year old child (or as a 40-something adult) “what do you want to be when you grow up?” there’d be no hesitation about the answer – game show host.

My DVR is full of episodes of game shows that air daily on Game Show Network and Buzzr. My home library contains numerous books on game show history. My basement shelves hold several “home game” versions of classic TV game shows. I could go on and on, but the point is pretty clear. 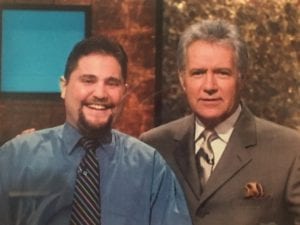 In the spring of 2003, I fulfilled a lifelong “bucket list” item when I was a contestant on the game show Jeopardy. I won one game, though lost in my first title defense, earning a grand total of $27,000 in prize money. We used that money to make some renovations in our home (including the “Jeopardy bathroom,” which we adorned with a picture of me with host Alex Trebek). And for the past 15 years, the last line of my resume has boasted “Jeopardy champion.”

Fast forward to 2016, when the ABC network rebooted several classic game shows as part of their “Sunday Summer Fun and Games” prime-time lineup. Included in that lineup was a revival my all-time favorite show – the $100,000 Pyramid –  now hosted by NFL Hall of Famer (and current host of Good Morning America) Michael Strahan.

Pyramid is a game of word association, where two contestants each work with a celebrity partner to try and guess a series of words/phrases united by a common theme within a 30 second time limit. Its genius is that while it’s incredibly simple in concept, it can be challenging to play well, requiring the ability to think and speak very quickly – especially in the environment of a television studio. 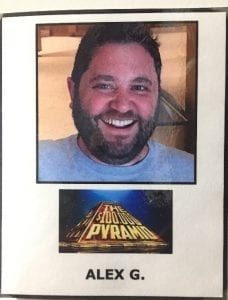 After watching the first season, I felt compelled to apply to be a contestant for season two. At 2am on a Saturday in September, I completed the online application and submitted a two-minute video describing myself, my love of game shows, and what I’d do if I won the grand prize (build an addition onto our house for my parents, who had just recently moved into our guest bedroom). For months, I didn’t hear anything – and in fact, had almost forgotten I’d submitted the application – until I got a call in mid-February asking if I’d like to try out for the show.

In the ensuing weeks, I used every opportunity to practice – whether it was a car ride with my wife, or dinnertime with the family (my six- and nine-year old boys have gotten really good at the game). I even went online and bought a used copy of a 1980s “home game” version and a 1990s “interactive DVD” version of the show online to assist with my training.

After three rounds of Skype video interviews with casting directors and contestant coordinators (one of which actually took place in a conference room at Schneider’s Boston One Campus), I was told in late March that I’d been selected to be on the show, with a taping date in late April. I told a few family members and close friends and colleagues that I’d be participating in the show, but in this age of social media, we were asked by the producers to keep things very quiet. 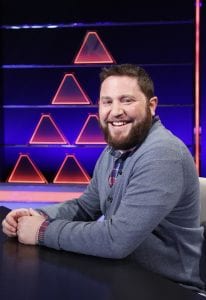 On April 25th, my wife, my brother and I flew to New York, and the following morning, I headed over to ABC studios. They film three-to-four 30-minute shows each day of taping, so there were eight contestants (many of whom had previous game show experience) together in the “green room,” where we spent a couple of house filling out paperwork, watching old episodes and getting in some last-minute practice. In fact, the person with whom I was doing most of my practice turned out to be my opponent on the show!

Once we got on stage, things moved pretty quickly. We briefly met our celebrity partners (comedians Ali Wentworth from “Nightcap” and “In Living Color” and Kathy Najimy from “Veep” and “Sister Act” – who’d actually been a contestant on the show in the 80s) and then before we knew it, we heard the announcer say, “From the ABC Studios in New York, it’s the $100,000 Pyramid. And here’s your host, Michael Strahan!”

In the first round, my opponent got out to an early lead, but she stumbled late, and Ali and I were able to make a comeback and win the round, earning a trip to the Winner’s Circle and a shot at $50,000. Once seated the Winner’s Circle, Michael Strahan asked me, “as a game show fan, how does it feel to be here?” To which I responded, “It feels pretty surreal – but it also feels like this is where I belong. Maybe I’ll just stay for a little while.”

In the Winner’s Circle, the goal is to get your partner to guess six categories by giving them a list of clues that fit the category. For example, if the category is “Things you Drink” you might say, “Milk. Water. Beer. Soda.” You’re only allowed to give a list – only nouns and adjectives – no prepositions (which is far harder than it seems). Ali and I got the first three categories pretty quickly, but we got stuck on the fourth one. My clues of “Louis Pasteur” and “Marie Curie” didn’t work. It was only after I came up with “Bill Nye” that she correctly guessed “Famous Scientists.” We got the fifth almost immediately (“Things in the White House”), and with 11 seconds left on the clock, my clues of “a rifle”, “a gun” and “dice” were enough to get Ali to guess “Things you Shoot” to win me $50,000! 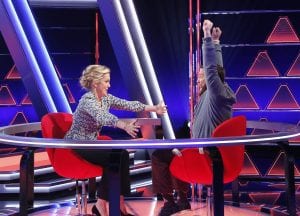 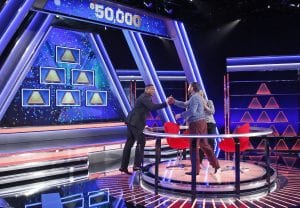 In the second “Main Game” round, things were evenly matched through the first couple of categories. But in her last category, my opponent had some difficulty with a Leonardo DaVinci themed set of clues, and I was able to get Kathy to guess all of our “Tom Hanks Movies with One-Word Titles”, earning me a second trip to the Winner’s Circle, and a shot at an additional $100,000.

During the break, the contestant coordinators and producers kept telling me to try and relax. Kathy held my hands, and we spent what seemed like hours staring at one another, trying to make as deep of a (silent) connection as possible. And it must have worked, because we breezed through the first five categories in near-record time. The sixth and final category gave me a little trouble, but after giving the clues “Straight” and “Parallel”, Kathy correctly guessed “Types of Lines”. My eyes bugged out of my head, I shouted “We did it! We did it!” and I jumped out of my chair, giving Kathy a huge hug, knowing that I’d just won an additional $100,000 in only 33 seconds. 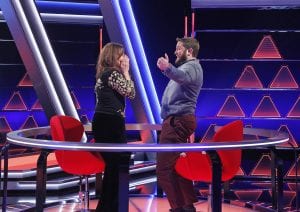 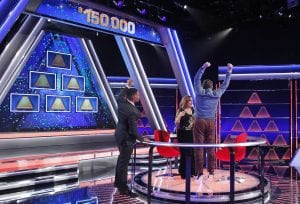 The rest of the day was a complete blur. They brought my wife out of the audience and up on stage to take some pictures. My wife, brother and I got lots of hugs and high-fives from audience members and studio employees as we left the studio. Later in the evening, we headed out to dinner, and just kept shaking our heads and laughing to one another that I’d just become only the second person to win the $150,000 grand prize. But because of confidentiality rules, we couldn’t tell anyone – including my parents (who, if you’ll remember, were living in our guest bedroom and will be the recipients of the prize money). 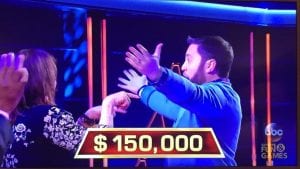 In the lead-up to the July 23rd air date, we were (finally) able to tell our family and friends (and many of my Schneider colleagues) about the show. I shared a few promotional pictures on Facebook and via email – but of course, couldn’t share any “spoilers” with anyone. In fact, because we’d all kept such a “poker face” about the outcome, my parents thought that I’d actually done quite poorly. As such, perhaps the most enjoyable moment(s) for me were videotaping my parents as they were watching the show in our family room, and seeing their sheer surprise and joy as I won both jackpots. 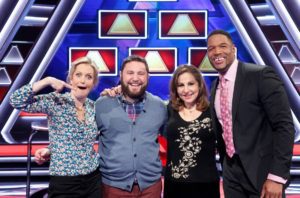 Following the show, the response was overwhelming – calls, texts, emails, Facebook posts, Tweets – with everyone congratulating me on my performance (I didn’t get a lot of sleep that night). And there were some fun and unexpected outcomes: a couple of GIFs capturing moments from the show circulating on Twitter, and a “shout out” the next morning on Howard Stern’s radio show on SiriusXM (he’s friends with Ali Wentworth).

Now that it’s over, lots of people have asked me for advice about getting on a game show. And I tell everyone the same thing – just take that initial step – go online, fill out the application, film the audition video – because if you don’t, you have no chance to “Come on Down.”

Alex Gershman began with Schneider Electric in 2012, leading Customer Analytics as part of a newly-created Customer Experience team. He most recently led Sales Operations and Data/Analytics for our Strategic Accounts team in the US. And as of early August, now serves as Director of Strategy for our US Services and Solutions team, where he is responsible for providing strategic support to accelerate growth of the Services & Solutions business in the US. Alex holds an MBA in International Business from Georgetown University and Undergraduate Degrees in International Relations and Hispanic/Latin American Studies from The Johns Hopkins University. He is passionate about Australian Rules Football, serving on the Board of Directors and as a Coach for the local Washington DC-area youth footy club. He is married to a wife that loves game shows (almost) as much as he does, and has two boys (ages 9 and 6) who constantly keep him on his toes.