According to Microsoft, the annual damage caused by cybercrime is expected to reach $6 trillion by 2021, up from $3 trillion in 2015. This number includes significant increases in attacks on enterprise operations technology (OT) systems. The reasons for this increase in OT attacks are twofold. First, as the increasing power of embedded electronics and connected intelligence migrate further down the levels of the OT systems automation hierarchy – including sensors and actuators – the sheer volume of potential hacker targets increases.

Second, many legacy OT systems, and their human operators have become more susceptible to risks over time as more and more systems around them are interconnected. For many operators, maintaining a high level of system security has never been a high priority. In fact, many people believe that they’re much better protected than they really are, or they fool themselves into believing that their organization is not a ripe target for hackers. The truth is just the opposite. A well-known quote attributed to Dmitri Alperovitch, a thought leader on cybersecurity strategy who has served as special advisor to the Department of Defense, says it well: “Only two types of companies exist—those who know they’ve been compromised, and those who don’t.”

Although the Information Technology (IT) world has long been active in combatting cybersecurity threats, the OT world, given its unique exposure to risk from multiple endpoints, is not as mature in its development of adequate cybersecurity strategies. OT operators must recognize that none of their everyday work systems is ever totally secure and that the potential universe of threats and risks is quite diverse.

Myth: Techniques for hardening IT systems work the same for OT

Although the work of securing OT systems is similar to the approach used to secure IT systems, some differences exist. IT personnel often believe the myth that IT principles and processes can be applied directly to OT. For example, scanning an IT system for unauthorized devices and open ports is a common IT practice, but scanning OT system for devices and open ports could overwhelm the Ethernet communications of some devices, causing their communications to lock up, effectively triggering a denial of service. In the IT world, servers and PCs can handle such scanning. However, in some cases, isolated OT devices can have limits on the kind of traffic they can withstand. Too much traffic can disrupt or lock up device communications to the point where the device must be power-cycled in order to recover, which could require an entire process to be shutdown.

Fundamentally, OT systems are interacting with and controlling the physical world, and both information and cyber-physical control points are at risk. Therefore, it is in the interest of stakeholders to have their IT staffs approach OT with an open mind, and become familiar with OT technologies, risks, and constraints when involved in deploying and maintaining OT cybersecurity solutions. In the case of both IT and OT, however, achieving successful system protection involves a healthy balance of well-trained people, monitored processes and operations, and cyber resilient technologies.

When protecting OT systems, the following approaches are recommended for lowering the risk of cyberattacks:

A person may decide to create a bridge to the air gapped system in order to acquire data for another system they are managing. Or a service person, who needs to provide an update to that OT system, brings in an update on a USB memory stick. Then, without knowing it, he leaves behind bridgeware picked up by that memory stick from another computer. The bridgeware then starts running and it has enough intelligence to scan around and learn what it can, leaving an instance of itself behind to perform further reconnaissance, deploying itself further into the system. The next time the service person comes by with a USB stick, the bridge ware updates that USB stick and laptop with what it has found. Finally, at the end of cycle, that information makes its way back to the hacker the next time the laptop connects to the Internet.

To learn more about how Schneider Electric security experts can help you strengthen the cyber resilience of your OT networks, download the “Strategies for Recognizing and Preventing Insider Attacks on Industrial Control Systems” white paper.

Dispelling the Myths About Outsourcing Data Center Operations and Maintenance

Technology isn’t the only Weapon for Effective Cybersecurity

IT vs. OT Cybersecurity: Why Process Industries Must Recognize the Important Differences 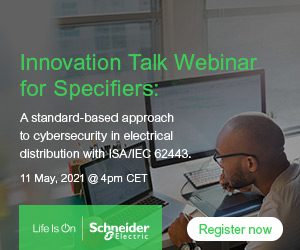