A lot has been written about the benefits of a smart city to its citizens.  Things like better organized activities through city apps, smoother traffic flow, easier parking, and better communication with citizens are often cited.  I certainly enjoy the smart parking garage that tells me where the next available space can be found and the smart signage that tells me the best route to avoid traffic after a concert.  These benefits make life more convenient for sure, but we also need to think about the lasting benefits of reducing a city’s carbon footprint, using less energy and leaving the world a better place for our children?  Now THAT’s ‘smart’.

Cities are challenged with more than just the ‘nice to have’ conveniences of ‘smart’.  We are facing exploding population growth.  According to the www.worldometers.info/world-population/, the world’s population is growing at 1.2% per year and much of that is concentrated in cities.  This population growth is straining our electric grids and water supply, and city budgets just can’t keep up.

Have you ever realized how much warmer it is when traveling into a city from a rural area?  According to the EPA, the annual mean air temperature of a city with one million people can be more than 1.8 to 5.4 degrees Fahrenheit warmer than surrounding areas, and the evenings can be even warmer, meaning more fans and air conditioners.  And, with more connectivity than ever via the internet of things (IoT), we are using more energy through our connected devices- generating more and more heat.  (Most people never realize that their smart phone can actually use more electricity than a typical modern refrigerator due to the supporting infrastructure of servers and data centers used to access information.)

For issues like energy efficiency and sustainability, smart cities need partners with a proven track record.  That’s where companies like Schneider Electric can come in.  We believe that access to energy is a basic human right and the present way of managing energy is unsustainable.

To address a smart city with rapid population growth and its resulting challenges, Schneider Electric operating technologies provide solutions from smart energy to smart water to the smart built environment. 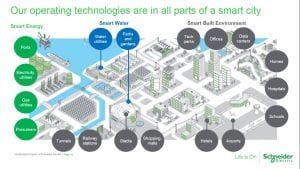 One example is the smart built environment, where Schneider Electric’s EcoStruxure architecture enables city buildings such as schools, hospitals, shopping malls and railway stations with the technology and tools to reduce energy consumption by up to 30%.  An example is the Davis Public School System in Utah where the school district used EcoStruxure Building Operation to reduce HVAC energy consumption by 7% even as the campus grew by 18%. 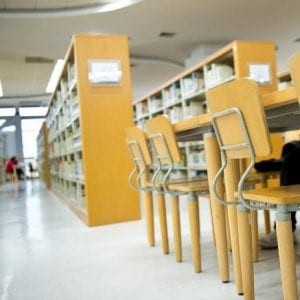 Smart city efficiency in energy consumption can be found in the built environment such as school districts and hospitals.

Our reliance on electricity may never change, but we can find ways to make our cities smarter by measuring and monitoring energy consumption, finding new types of generation like microgrids and solar, and improving the energy efficiency of existing and new city systems.  That’s what ‘smart’ is all about.