Smart cities have been at the forefront of discussions among tech companies and academics for over 15 years, yet very few countries have been able to execute a truly smart city from the ground up- a greenfield smart city complete with smart city solutions such as smart buildings, intelligent traffic management, smart use of water and waste water, and end-to-end energy management converging Operational Technology (OT) with Information Technology (IT).  But why?

The sheer size and complexity of a truly greenfield smart city requires a level of funding, expertise, organization and planning that rarely occurs.  Not to mention, still a relatively new concept, smart cities requires the support of multiple levels of government, expert consultants, technology firms and others to make the concept a reality.  Given this, cities oftentimes look to technology vendors for conceptual products to help prove out their concept.   All of this takes funding, patience, and lots of it, and the support required to make the concept a reality doesn’t always survive through multiple political cycles and multiple government levels. 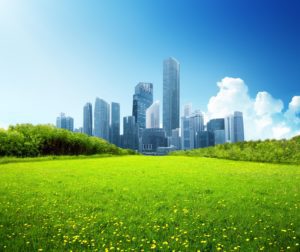 With such complexity, most cities considering going ‘smart’ don’t have the time or the expertise to tackle an entire city from the ground up.  They either pick projects to make ‘smart’ (such as their water system or city buildings) and tick them off the list over time, or they choose to support a smart precinct or smart district to prove out the concept in a manageably sized living lab environment.

These smart precincts or district scale developments are of course not city scale, but they are large enough that they can encompass multiple smart city domains, thus they become a visible and useful reference point to encourage future investment. Generally, these ‘smart precincts’ may be government planned and led but they are mostly executed by the private sector.  They almost always have a forward-looking technology focus; hence the smart precinct or smart city label. As these precincts are often of a large enough size, they are often known as a technology park or cluster.  They may also be the physical part of a government or city’s technology cluster strategy.

My time working for Masdar City in Abu Dhabi was of course my first hands on taste of a smart city project which was both city scale in respect of the domains of a city being planned and yet also more so a smart district in size.  I’ve also seen small smart districts like Issy les Moulineaux, a smart city project outside of Paris that enables energy optimization at the neighborhood level.

Then there is the privately developed EUREF Innovation Centre in Berlin, Germany that encompasses technology like micro grid, smart buildings, EV charging with A.I micro-grid machine learning and more, and yet has also been successful as a real estate project in its own right. Success at a district level can then be used to scale that success at a wider city level as these smart districts or precincts are become more and more pervasive.

So, are smart precincts the true potential to unlocking the promise of smart cities?  They may not be the only way forward, but if the smart precincts I’m seeing in every corner of the world continue to grow, there is a strong chance we will experience a sea change in our cities in just a few short years.

As they say, only time will tell.