When planning to add a photovoltaic system to your facility to capture solar power and convert it to electricity, one of the first steps is determining the appropriate size of the system. In this blog post, part of a larger series, you will discover strategies and methods for sizing your photovoltaic production.

The sizing of the system can be defined as a function of the pursued objectives. Here are four of the most common approaches: maximizing self-sufficiency, meeting an Earth-friendly goal, achieving the highest financial benefit, or making the best of the opportunity.

One common strategy is to size the photovoltaic system such that the electricity produced does not exceed the power consumption at any time. The objective in this case is to consume locally 100% of the energy produced and avoid the more complex contracts that are needed when there is the potential for injecting excess power back into grid.

Even when the photovoltaic system is set to not exceed the power demand, such a situation may occasionally occur. There may be an unplanned shutdown for part of the installation, or some days with extremely low consumption and high production. For that reason, including an integrated pilot control system that will limit the output of the photovoltaic inverters can guarantee that no electricity is injected back to the grid.

To combat climate change and reduce carbon emissions, companies can commit to cutting their energy consumption and producing electricity from renewable energy sources. This frequently includes setting high objectives to be achieved within a defined time period, and almost as importantly, publicly announcing these goals.

One example of this is the RE100 initiative, wherein the world’s leading companies have committed to achieving 100% renewable power use across their global operations. The electricity produced by renewable energy sources can be purchased or generated on-site, and usually both strategies are used.

As one of the RE100, Schneider Electric is committed to using 100% renewable electricity globally across its operations by 2030. A number of measures already have been undertaken, including reduction of energy consumption by 10% every three years for more than a decade; the integration of on-site solar and geothermal generation capabilities; and a review of the company’s electricity purchase policies.

3. Achieve green building certification or be compliant with a regulation

Many new buildings are being designed specifically to meet green building certification standards or to be compliant with a certain level of local regulation. Regarding electricity, first measures are taken so that the building is as energy efficient as possible. Using locally produced electricity completes these measures, knowing that for buildings, geothermal and photovoltaics are among the main energy producers. For more information on programs that support this approach, read the explanation in the white paper Green Buildings Certifications.

A photovoltaic system can be sized to maximize financial benefits. In such cases, local regulations and conditions – things like subsidies depend on the power range, electricity price, contract type, and other parameters – may determine the appropriate number of photovoltaic panels.

Generally speaking, 100 m2 of solar panels produces about 15kW; obviously, the size of the photovoltaic system may be restricted as a function of the available surface area.

What about the existing electrical installation?

Adding solar production to an existing installation is likely to have some effect on the existing electrical infrastructure.

When the photovoltaic production capacity is lower than the power demand, integrating the photovoltaic system usually does not require replacement of the existing electrical infrastructure.

On the other hand, when the solar production capacity exceeds the demand for power, current and power flows in the installation can be higher than desired, and the cables and the equipment in the installation may need to be replaced. To minimize the necessary changes, possible options include choosing the appropriate architecture or controlling energy production.

For more insights on electrical installation sizing when adding photovoltaic production, watch this short video, which is part of a video series prepared by Schneider Electric’s technical communications group. 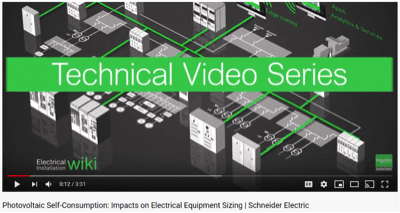