Poor power quality can cause innumerable problems in industrial facilities. While a facility owner’s first inclination might be to blame their electric utility for such problems, it’s much more likely that their own equipment is it fault. In fact, it’s generally accepted that up to 80% of power disturbances originate within facilities, rather than from utility-supplied electricity.

Industrial facilities are particularly prone to power-quality problems because of the density and complexity of electrical equipment involved in their daily operations. This post will identify how various types of equipment can contribute to facility-wide disturbances. I’ll also cover a couple options that can help engineers troubleshoot and correct these issues.

What to look for

Certainly, improper wiring, defective equipment and installation or operation errors play a role in such disturbances. However, there are also specific devices common to industrial plants that can cause power quality issues just through their everyday use. Following are some examples of how these devices can cause problems to arise as figure 1 illustrates. 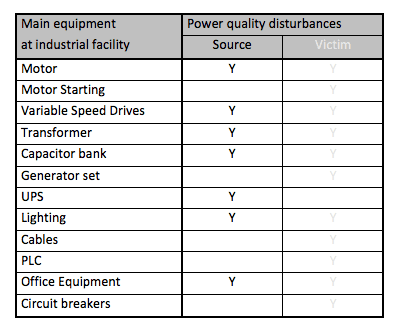 Electric motors are everywhere in many modern industrial plants, comprising up to 80% of facilities’ electrical load in some industries, and they also can be the cause of several types of power-quality problems commonly seen in these operations. These problems can include:

Variable speed drives (VSDs) have become go-to devices for facilities seeking to improve the efficiency of induction motors. Common applications include variable-torque centrifugal fans, pumps conveyors and compressor. However, VSDs also have become a major source of harmonic distortion if they aren’t associated with a harmonic filtering solution

Lighting typically represents between 5% and 8% of an industrial facility’s electrical load. Power-quality problems associated with this equipment can include:

Transformers are critical pieces of equipment in industrial plants, given the high volumes of electricity that can be moved around such facilities. They also can compromise power quality through such problems as:

While they don’t, themselves, create harmonics, capacitors can create resonance that can amplify the magnitudes of harmonic voltages and currents. For this reason, a project-specific study should be done to properly size the reactive power compensation system. Additionally, capacitor-bank switching can cause small voltage transients, usually with no impact on the system

Business and office equipment based on power electronics, such as PCs, copiers and printers, draw a non-sinusoidal current and are a source for harmonic distorsion.

With so many potential contributors to any given power-quality issue, how can facility managers and engineers track down the actual source? The answer is a systematic program of power measurement and analysis. Schneider Electric offers solutions to aid these efforts.

For example, with our PM8000 power-quality meters, disturbances can be detected, measured and recorded. These devices feature Disturbance Direction Detection, which can help localize a problem’s root source. Our Power Quality Advisor can simplify analysis with its green-yellow-red indicators. Using it, facility personnel can evaluate a problem’s impact on manufacturing processes and equipment and estimate the cost of poor power quality.

You also can read my previous posts on power measurement and analysis, including Power Quality- Measuring to Manage and How Today’s Meters Make Power Quality Data Easier to Understand.