In Latin America, where electrical standards and practices vary from country to country, ignorance of electrocution is widespread. And with 80% of electricians working in the informal sector, there is an urgent need to reach out and educate.

As you know, safety equipment like residual current devices (RCD) is an essential part of any electrical installation in the home and at work. Yet I can’t help noticing and worrying that electric shocks continue to injure and electrocution to kill on a large scale here in Brazil and across Latin America. Of course, accidents do happen and in that event residual current devices save lives.

But many accidents should not happen in the first place. Electrical education or, rather, the lack of it is a critical issue.

Latin American consumers and electricians do not know their electricity ABC. Many do not even seem to know that electricity is dangerous. Some of your colleagues here do not even know how to secure installations.

Latin America boasts 20-25 countries and a wealth of cultures. Electrically, it is as mixed as it is culturally: different voltages, frequencies, and standards in different countries. 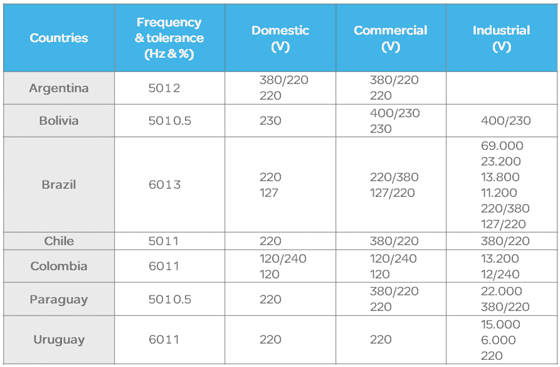 In Brazil alone – where new devices and installations have had to comply with ABNT NBR 5410, based on IEC 60364 since 1980 – the frequency is 60Hz, while voltage is phase-neutral 110/220 and varies from state to state. Some countries, like Argentina and Chile, are largely aligned on IEC standards and use the 50Hz electric power frequencies. In others, such as Ecuador and Colombia where the US influence is strong, the frequency is 60Hz and the standard NEC.

What’s more, the continent as it is today is relatively young. If you are from “Old Europe” you can be proud of your mature installations, where the neutral wire really is neutral – earth-connected and carrying no current from other loads. According to a recent survey many Latin American installations are unsafe – and those unsafe installations are spreading apace as new buildings sprout up across this fast developing continent.

Statistics on injuries and fatalities from electrocution are few and far between. Part of the reason is that some 80% of electricians work in the informal economy, where hard, official facts are difficult to come by. The only real source in Brazil, for example is the media. They are full of stories about electrocution, which suggests that it happens a lot. We think the number of deaths is between 2,000 and 3,000 a year.

Ignorance the problem, education the solution

The overwhelming problem, though, is ignorance. Consumers are blissfully unaware that electricity is dangerous and know very little about basic precautions. Nor do electricians know that they should make an installation safe or how to do so. The fact that the vast majority work in the informal sector compounds matters.

As members of the electrical engineering community and suppliers of electrical equipment, it is our duty to help save lives. Education is the key and part of my job involves raising the awareness of young people about the dangers of electricity. We, together with other stakeholders, give talks in schools and training facilities like the nationwide chain of technical schools SENAI, which have introduced basic electricity courses.

We also pass on knowledge to teachers and work in laboratories to give them hands-on experience of protection devices. This approach is particularly effective in a country like Brazil.

To reach informal, unskilled electricians, stakeholders across the continent have formed associations to teach them the basic dangers of electricity. We, for example, recently toured Brazil organizing events and training courses to raise awareness and understanding among more
than 3,000 informal. With the fundamentals under their belt, some then sought out further, more advanced knowledge. That is when it becomes possible to start talking about safety equipment like residual current devices.

But when we do broach the subject of protective equipment like residual current devices, some informal electricians raise the objection of cost. Our response? “What about the cost of human life, then?” We find that they are more receptive to such thinking after their basic training in the dangers of electricity. And we can then vaunt the residual current device’s other merits – an easily installed single product for failsafe electrical protection.

Today just 20% of installations are safe

Actually, the first step in reaching out to informal electricians is a general one: make it simpler to register formally by cutting the red tape and cost. As soon as you are a formally registered official contractor, you are bound by law to install RCDs in new installations. And you can may pass on the safety message to your former coworkers still in the informal economy.

In the meantime, building awareness is the key. If consumers and you, as electricity professionals, all thought about the dangers of electricity for one minute a day, electric shocks and electrocution would be drastically reduced. Of that I am sure.