Things are revving up for the electric vehicle industry with the help EV charging.

According to Inside EVs, sales of new electric cars worldwide surpassed two million units for the first time in 2018. That’s a 72 percent increase over the previous year at an average market share of 2.1 percent.

Government mandates are driving EV adoption from China to California. Based on new emissions standards put forth by the European Union, as many as a third of the new cars in the EU will be electric or hydrogen-powered by 2030. The government of India has announced electrification targets, as well.

At the consumer level, drivers are embracing EVs for their improved fuel economy, reduced emissions, and lower fuel expenses. According to the Office of Energy Efficiency & Renewable Energy at the United States Department of Energy (DOE), the cost to charge your car at home in your garage over the course of a year “can be less than running an air conditioner.” And research shows that “electric cars are already cheaper to own and run than petrol or diesel cars in the UK, US, and Japan.”

Back to the future

While electric cars may strike some as a modern-day phenomenon, they have been with us in one form or another since the late 1800s. In fact, at the start of the 20th century, electric cars accounted for approximately one-third of all vehicles on the road and seemed destined for mainstream success. However, Henry Ford’s mass-produced, gasoline-powered Model T soon delivered everyday transportation at almost a third of the cost of electric cars. By 1935, EVs had virtually vanished from the roadways. 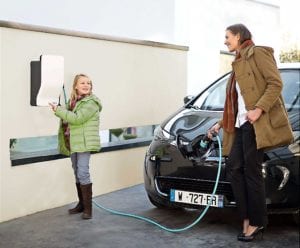 Residential charging is vital to the continued rise of EVs. A recent Bloomberg article reports that “the world still doesn’t have enough places to plug in cars.” One Beijing-based owner of two EVs says that charging at public facilities costs him more than double the price he pays for electricity at home, and “units are often out of service or incompatible with his cars.” He concludes that for many drivers, “if they don’t have charging facilities at home, buying an EV would only cause them trouble.”

The DOE reports that more than 80 percent of plug-in EV drivers charge their vehicles at home where, in addition to convenience, they enjoy low, stable residential electricity rates. It’s not surprising that people like to recharge their batteries – in their cars and, metaphorically, their bodies – overnight. In addition, the advent of advanced home charging options is helping to allay “range anxiety” for most drivers.

According to the Union of Concerned Scientists, the length of time needed to recharge an EV is dictated by two factors: how energy-depleted the car is and the type of charger you use.

Chargers supplied by car dealers at the time of a vehicle’s purchase provide baseline powering capabilities. However, many consumers choose to upgrade – and for good reason. Enhanced EV charging solutions such as the EVlink by Schneider Electric work faster than dealer-supplied chargers. They also deliver a host of additional benefits to give EV owners peace of mind knowing that when they are ready to roll, their vehicle will be, too.

As the global specialist in energy management and automation, Schneider Electric delivers innovation through a vast range of smart home solutions, including EVlink chargers. For example, you can integrate EVlink with your home’s electrical system to keep your car from charging during peak-demand times, i.e., when other electrical appliances are likely to be in use. You can also set your charger to power up your vehicle at the cheapest times.

Rated for indoor safety, EVlink’s intuitive design facilitates daily use. Each station comes complete with a docking bracket for additional flexibility in installation and usage. And a customized skin allows you to personalize your charger with family photos, team logos, or whatever suits your fancy.