People love their automobiles, so it’s no surprise that the global automotive industry is booming again following the recent downturn. That’s good news for auto parts manufacturers that are seeing a surge in demand.

To be competitive in a crowded industry, die shops are finding ways to make a wider variety of auto parts faster but without increasing costs. Although it’s challenging, there are manufacturers out there succeeding at it, thanks to OEMs with clever solutions. DieBotics (Grand Rapids, Mich.), a manufacturer of part transfer systems primarily for the automotive industry, is one such clever OEM. I’ve had the pleasure of working with them to create a solution that is helping to grow an untapped market.

Typically, die shops have been making part transfers one at a time and for a single part. The systems are often large and need to be resized to fit smaller parts. Since these systems are time consuming and costly to build, many tier 2 and tier 3 parts companies can’t afford them.

The new DieBotics transfer system has a modular design that can be changed to work on different parts, making it a more flexible and cost-effective solution for companies that produce a variety of products. The size of the system, coupled with the modularity and flexibility, has allowed DieBotics to expand a market that was previously ignored. 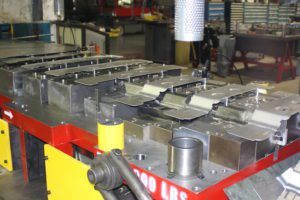 The smaller press market has traditionally been served by mechanical transfers, but the servo-based DieBotics transfers system is programmable and allows for modularity, faster speed, and better accuracy than a mechanical system.

In addition, the servo-based system has more accurate repeatability and timing. The shot height and speed of the press can be more confidently adjusted compared to a mechanical transfer that’s designed for a specific part and die.

For companies running manual operations, there’s an even greater opportunity to significantly increase their throughput with a low-cost automated transfer system. In Mexico, a DieBotics transfer system helped a parts manufacturer triple the productivity of its $2 million press by increasing to 20 strokes per minute from the original hand-fed 6 strokes per minute.

Now THAT’s adding significant value. What do you think?

Watch it in action here