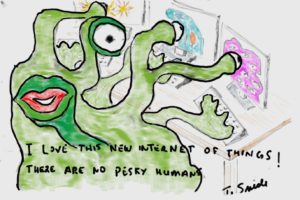 Where Industrial Automation may be lagging other industries is in the gathering of useful data and the use of this data. Much of the information that resides on the end device that could be useful is not gathered. Data that is not consumed at the field or process levels in the traditional Industrial Automation hierarchy is not gathered. If it is gathered, the data is not being sent up the network in most cases. The value of this data is increasing and Industrial Automation networks are starting to collect the data and communicate this data farther up the hierarchy. Energy usage and concerns are the first initiative spurring the change in the data transmission strategy. However if the data is not used then there is no reason to collect it.

With all these enabled connected devices in Industrial Automation and the desire to communicate more data there is a concern for cyber security. Stuxnet taught us this. Cyber security is being addressed. Even in resource constrained devices there are solutions to support encryption and other cyber security requirements. The Scalable Encryption Algorithm (SEA) is an example.