Cisco renames the Internet of Things to the Internet of Everything. Cisco estimates there are 10 Billion devices networked together today and expects that number to grow to 50 Billion by 2020. The vision Cisco sees is new capabilities for networks and devices and richer experiences for the user.

To General Electric the Internet of Things is the Industrial Network with 3 key elements; intelligent machines, advanced analytics and people at work. These elements form an industrial internet data loop that continually feeds and improves itself with secure cloud-based networking as the nucleus. The complexity of the loop is overcome by transferring some decisions to the digital system.

So, what does this mean for automation? Change is coming soon, a second industrial revolution with the rise of the machines.

Distributed computing at the device level will lead to machine and process optimization yielding better performance. New device to device communication architectures will replace the current client/server networks. This will impact the traditional PLC or DCS which will morph into cloud-based software. Automation networks will self-configure, self-regulate, and suggest efficiency improvements. 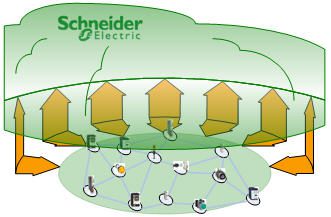 How will the Internet of Things impact your automation network architecture?