Sliding from a 1-1/2 year high on the first day of March, the April gasoline futures contract rolled into the nearest delivery position in trading on the New York Mercantile Exchange, signaling the spring transition to more stringent fuel specifications.

Known as the Reformulated Blendstock for Oxygenate Blending contract, April RBOB futures rallied to $1.7257 gallon on March 1, the highest trade on the spot continuous chart since mid-August 2015, after settling 21.74cts above the now expired March contract on the last day of February. However, too much gasoline supply and weaker-than-expected gasoline demand in early 2017 pressed the April contract down more than a nickel to settle at $1.6780 gallon on March 1. 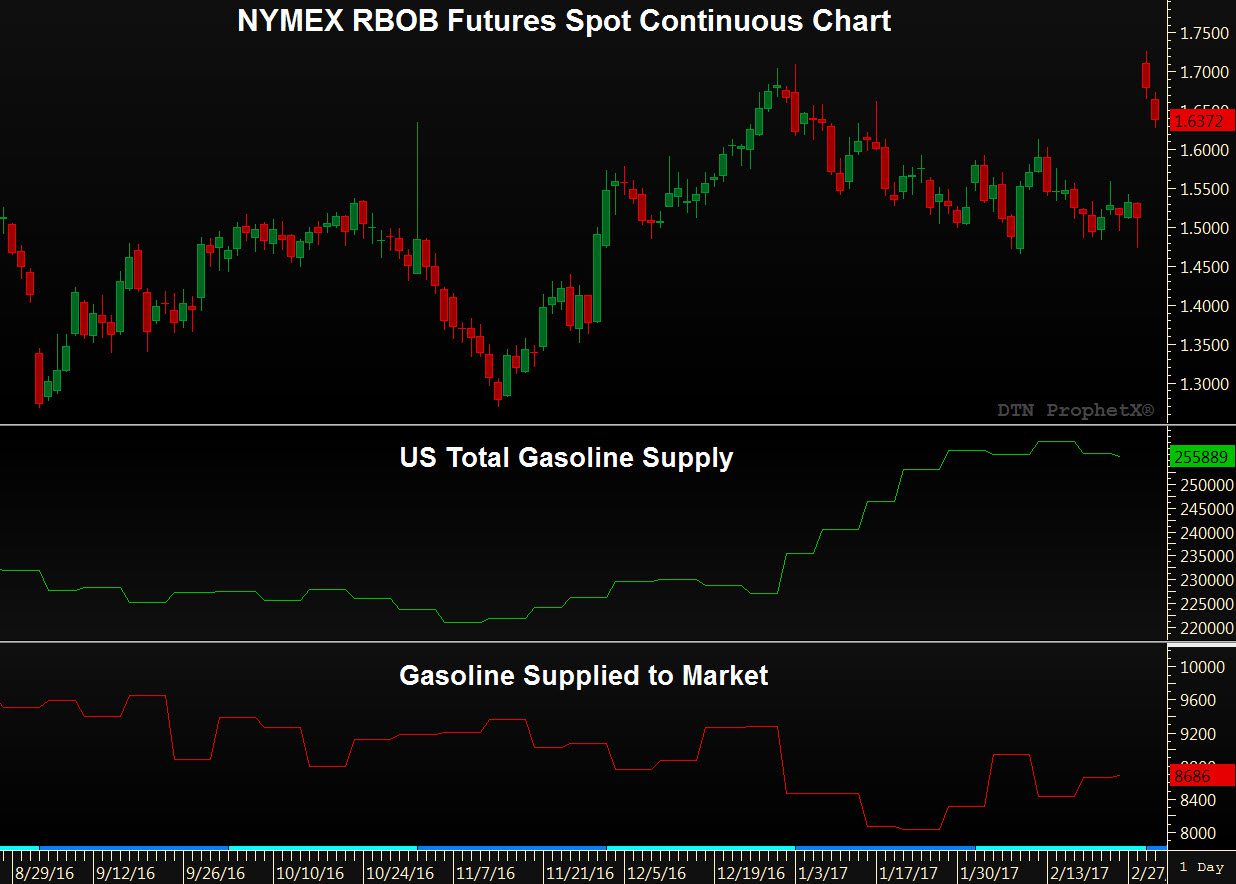 Will pricing in the wholesale gasoline market mimic the old Pennsylvanian maxim about March — “In Like a Lion, Out Like a Lamb?”

Gasoline supplied to market in 2017 through February 24 averaged 8.451 million bpd, down a steep 534,000 bpd or 6% compared with a similar timeline in 2016, while also below an 8.5 million bpd five-year average, according to data from the Energy Information Administration.

However, the statistic might be overstating the bearishness in consumption when you consider gasoline demand in 2016 reached a record high of 9.35 million bpd, while the current 2017 cumulative average is greater than in 2013 when it was 8.3 million bpd, above 2012’s 8.39 million bpd average, and tops the 2011 average of 8.19 million bpd.

Indeed, gasoline demand surged during the first three quarters in 2016 before tapering off in the fourth quarter as retail prices gained sharply. The U.S. retail gasoline average is currently more than 50cts higher than a year ago, reaching $2.314 gallon on February 27 for regular grade according to an EIA survey. Poor weather in California has also been credited in hamstringing gasoline demand in early 2017.

“This YOY declining trend actually began at the end of 2016 and has led to record levels of gasoline in storage and the lowest gasoline margins we have seen in some time. It is also causing refiners to review their operating strategies after running “full out” over the last couple of years to satisfy strong domestic and export demand,” writes Turner, Mason and Company in their most recent John Auers’ Turning Point blog.

Analysts note March and April are peak months for unit shutdowns during the spring refinery maintenance season, with those outages set to help pare down the oversupply. Moreover, January and February are historically the weakest months for gasoline consumption, and as the weather warms driving demand will climb.

Wholesale prices look vulnerable to the downside in March nonetheless, as talk abounds in the market that some refiners will slash their offers to move out winter grade gasoline to make room for lower Reid vapor pressure product. RBOB futures forward curve through August delivery illustrates the likely cap on wholesale gasoline prices, with the modest contango–a market structure in which nearest delivery is priced at a discount to deferred delivery–at less than 7cts a gallon. August RBOB futures settled at $1.7468 gallon on March 1.

Another sign suggesting price weakness, noncommercial traders, also known as speculators since they are not buying a futures contract to hedge an underlying physical position in the market, have consistently reduced their exposure to higher prices since reaching a 10-month net-long high on January 18. Speculators have liquidated 30,134 or 34% of their long RBOB futures positions since reaching the high to 58,535 contracts as of February 21, the Commodity Futures Trading Commission shows in their weekly Commitment of Traders report, with a long position taken on expectations prices would move higher.

Until the oversupply clears, gasoline prices will be capped. However a robust U.S. economy and ongoing gains in employment could help accelerate the drawdown.

The stock market continued its tear, with the Dow Jones Industrial Average rallying through the 21,000 mark for the first time on March 1, and U.S. manufacturing expanded in February, with the Purchasing Manager’s Index climbing a more-than-expected 1.7 points to 57.7 according to the Institute for Supply Management, with readings above 50 indicating expansion.

At 4.8% in January, the national unemployment rate is at 10-year low, and the labor participation rate has ticked up 0.3% since Trump won the presidential election to 62.9% in January, although remains near its lowest point in 40 years.

The string of positive economic data has enlivened consumer sentiment, with the Conference Board, a private international company, reporting consumer confidence in the United States at a 15-year high in February. These data sets indicate consumers are bullish.