The average price for regular grade gasoline sold at retail outlets across the United States reached a six-month high of $2.496 gallon on January 9, a time of year when gasoline prices typically decline, with the previous high of $2.499 gallon registered in June also the 2016 high, data from the Energy Information Administration shows. The average declined over the following three weeks to $2.408 gallon on January 30, although appears positioned to again advance in February.

The price action runs contrary to gasoline’s seasonal disposition, with seasonal factors corroborated by bearish fundamentals. EIA data shows the domestic supply of gasoline as of January 27 increased 21.6 million bbl or 9% from end year 2016 to 257.1 million bbl–the second largest inventory holding since record keeping began in 1980, with the high reached in mid-February 2016 at 258.7 million bbl.

The building supply came as implied demand–gasoline supplied to the primary market–slumped to a nearly two-year low at 8.039 million bpd despite strong exports. EIA shows US gasoline exports averaged 925,250 bpd in January after reaching a weekly high export rate of 1.149 million bpd during the week-ended December 23. 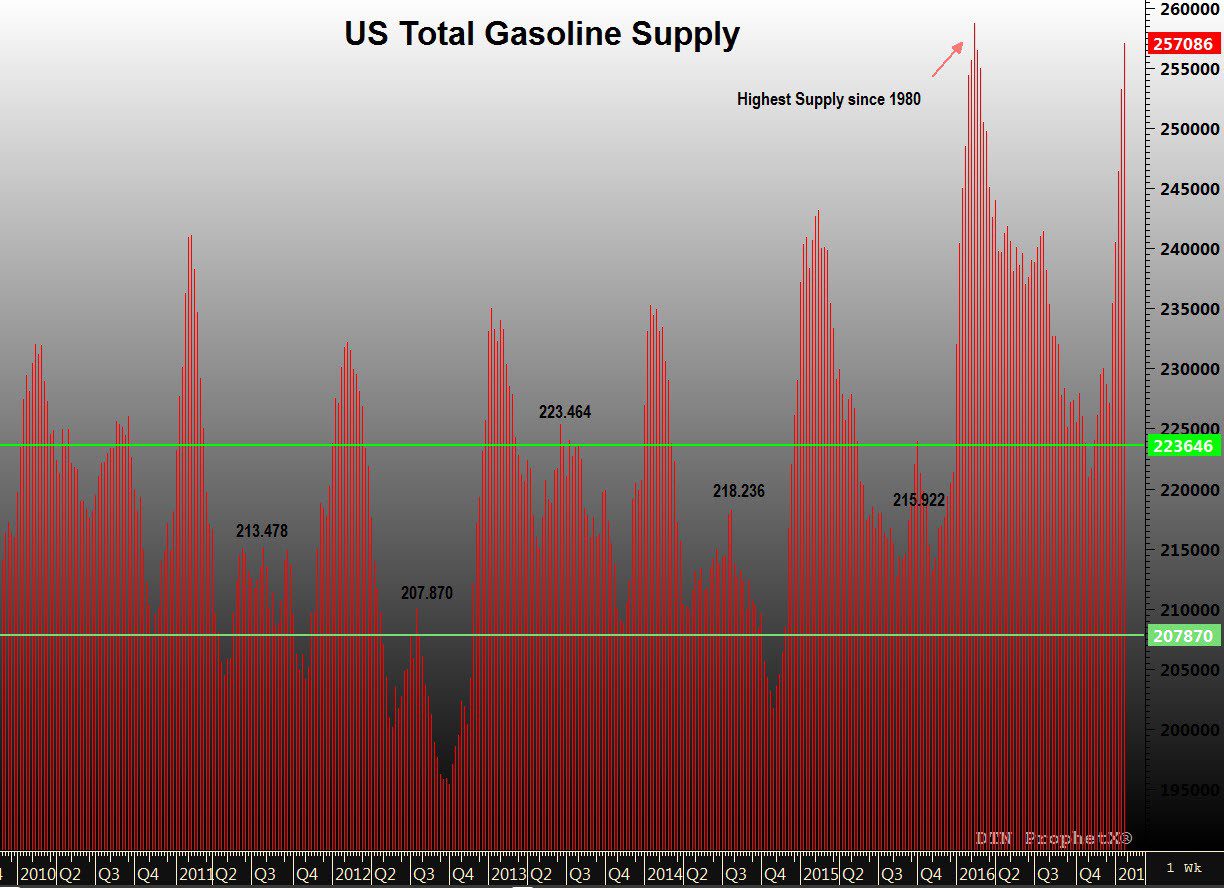 Bearish weekly statistics in January provided some downward pressure, with February gasoline futures traded on the New York Mercantile Exchange testing price support at the $1.4888 gallon 50% retracement point for the November-to-January rally late in the month after reaching a 16-month high on the spot continuous chart at $1.7095 gallon on the first business day of 2017. Still, the February reformulated blendstock for oxygenate blending futures contract on NYMEX expired January 31 at $1.5256 gallon, a value at the upper end of the 2016 summer range for nearest delivered futures and nearly $0.40 gallon higher than year prior.

On the first day of February, March RBOB futures settled at $1.5791 gallon as it rolled into the nearest delivered position in the contango market, well above the $0.8975 gallon multiyear low plumbed in February 2016 by nearest delivered futures. The forward curve ended February 1 at a $1.8139 gallon high for May delivery, near flat with the June contract at $1.8105 gallon, and at a slight premium to April delivery at $1.7973 gallon. 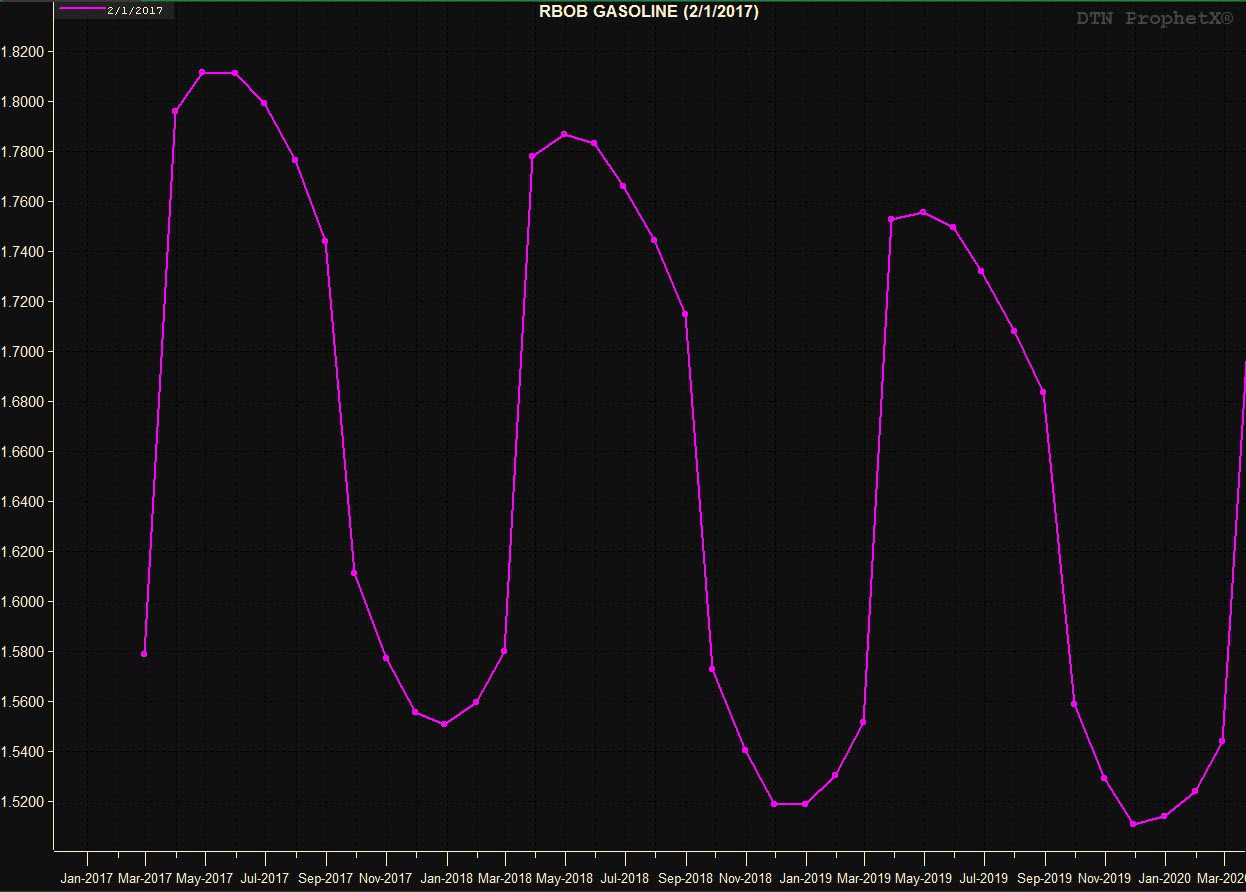 RBOB futures second quarter premium to March delivery coincides with the preseason rally for gasoline, as prices advance from late winter to spring amid the transition to the more costly to produce summer-grade gasoline specifications, seasonal refinery maintenance, and the expectation for greater demand during the warm summer months. EIA forecasts US gasoline consumption to average 9.62 million bpd from June to August, a tad higher than estimated for the corresponding period in 2016, and well above a projected 9.04 million bpd demand rate for the first quarter. 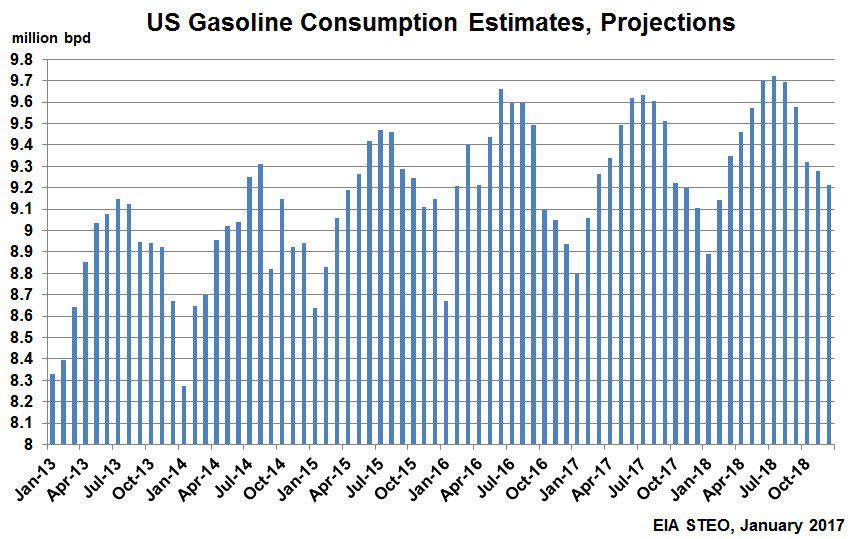 Driving current price strength is bullish sentiment reflected by building length in NYMEX RBOB futures by non-commercial market participants who are speculators since they are not using the futures contract to hedge a physical position in the underlying market. The non-commercial trading group boosted a net-long stance in RBOB futures to a 10-month high in mid-January before paring the position data from the Commodity Futures Trading Commission shows, with a long position taken on an expectation for prices to increase.

Open interest for RBOB futures reached a record high in January, with the elevated market participation demonstrated by the outstanding contracts indicating wide support for higher prices. This dovetails with bullish sentiment for West Texas Intermediate futures, with the US crude price benchmark achieving a record high net-long position of 482,523 contracts held by speculators in late January, with the futures position equivalent to 482.523 million bbl of crude oil. Open interest for WTI edged off a record high to 2.15 million outstanding contracts in late January. 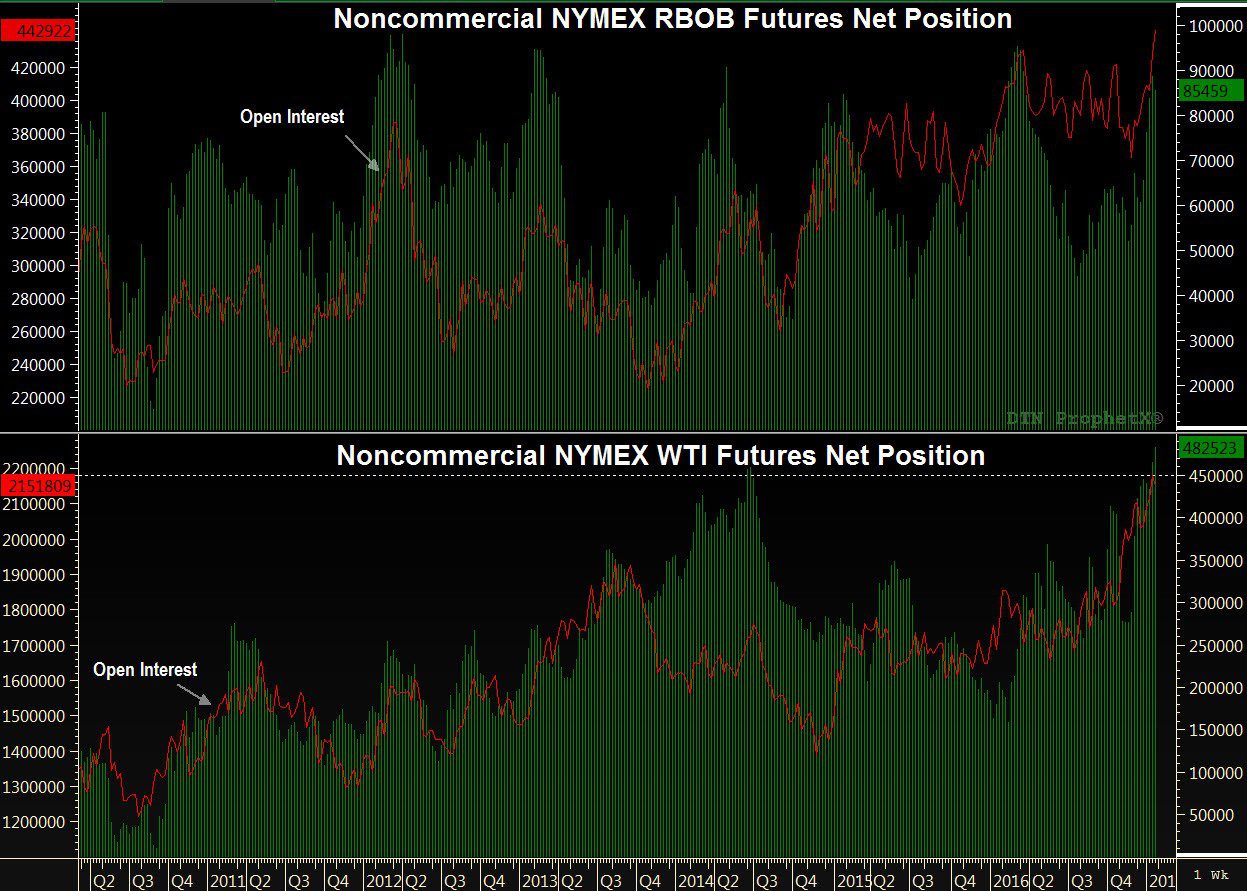 Production cuts by the Organization of the Petroleum Exporting Countries and 11 non-OPEC producers that took effect January 1 continue to promote the market’s exuberance, with early indications showing strong compliance with the cuts by OPEC. Of the nearly 1.8 million bpd in combined production cuts agreed to by the parties in late 2016, OPEC has agreed to a 1.2 million bpd reduction during the first six months of 2017.

OPEC has so far defied its history of cheating on quotas spurring the record length in WTI futures. The International Energy Agency expects the production cuts to erase a global supply-demand imbalance in the second quarter, three years following the start of overproduction which peaked in the second quarter 2016.

The large net-long stance leaves the market vulnerable to a steep selloff, and the market will continue to closely scrutinize OPEC production rates to ensure a high level of compliance. So too will market followers look over US production data, which reached a 10-month high in January at 8.961 million bpd as higher crude prices prompt US shale oil producers to finish drilled but uncompleted wells. The EIA reports 5,379 DUC oil and gas wells in December.