The United States is sitting pretty with an abundant supply of crude oil and low prices at the pump. And after last winter’s above average temperatures, the inventory of heating oil for the East Coast, which includes the world’s largest concentration of home heating oil customers in the Northeast, are hovering at six-year highs and are still building.  However, do long-range forecasts predict the supply surplus will continue to grow?

Expectations are set for a weak La Niña and weak Solar Cycle. This will result in reduced snow in southern regions and increased snow in the north this year. “In essence it was a very warm winter last year due to a strong El Niño. This year will be closer to normal for temperatures in the Northeast,” according to Schneider Electric’s Jeff Johnson “It may be near to slightly warmer right along the East Coast, while more interior areas of New York and Pennsylvania could end up slightly colder than average.”

“With colder temperatures and more snow predicted for the Northeast, the supply of home heating oil will decrease as demand increases, said Brian Milne, energy editor at Schneider Electric.  “While I don’t believe the current supply will be depleted, fuel usage will be much greater than in the past few years.

Colder than normal temperatures will begin early November and grow in persistence and intensity. It can then be predicted that home heating fuel usage will increase. Low demand and surplus fuel—a problem producers faced last year—will not continue. 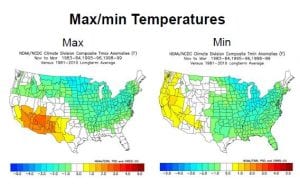