Aracruz Celulose Pulp Mill in Espírito Santo, Brazil uses eucalyptus trees for making pulp, which is shipped around the world to paper producers who make tissue, fine printing, writing, and specialty paper products. The advantage of eucalyptus trees is that they grow so quickly, reaching about 35 meters in just seven years. This means that they can be harvested more frequently than slow-growing pine forests. In addition, eucalyptus fiber, originally considered to be secondary quality, is now is sought after because it provides high opacity, softness and good absorption of inks. 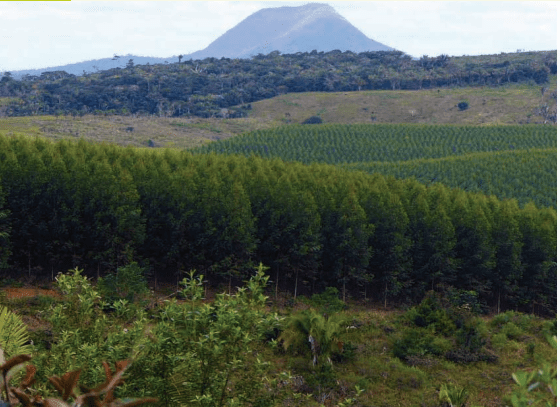 A remarkable performance history with Foxboro®

For all of these reasons, the Aracruz pulp mill grew to be the largest single pulp production facility in the world, capable of producing more than two million tons of market pulp per year. Beginning in 1976 with the building of Fiberline A, capable of producing 400,000 tons a year of bleached pulp, this first line was controlled by Foxboro PCI-100 pneumatic instrumentation. The plant’s production capacity was expanded in 1986 when Fiberline B was brought online to produce an additional 600,000 tons of pulp a year

Modernizing with a trusted system

While the Foxboro pneumatic system served them well for 20 years, production had grown exponentially, so in 1995, Aracruz decided to overhaul both lines to modernize and eliminate production bottlenecks – while expanding their overall production capacity to 1.2 million tons per year. They replaced the original pneumatic control systems with Foxboro I/A Series Distributed Control System. These were configured combining multiple application processors and user workstations interfaced to programmable logic controllers (PLCs).

This approach to production control worked so well that in the year 2000 Aracruz undertook their largest project of all – the construction of Fiberline C and the upgrading of Lines A and B. The goal was to allow each line to operate independently but provide a unified view into all operations for better management of overall plant productivity.

Following a year of consultation and project planning, Aracruz decided to continue their strong relationship with Foxboro Operations and use the Foxboro I/A Series DCS to operate the new Fiberline C and upgrade the majority

of lines A and B – including interfacing to all the production equipment for major process steps.

Upgrading Fiberline A from its original pneumatic control systems to the I/A Series system was so effective that it was used as the basis for the Fiberline C plant expansion and resulted in significant savings in reusable engineering. In addition, Fiberline B’s boiler and evaporation units were upgraded to a Provox system and were simplified using Foxboro’s plug-in migration strategy.

Production on a massive scale

Besides production equipment, Aracruz’s operations also include several support systems such as chemical plants; a recovery boiler; the evaporative systems used to reclaim water; and a power plant for supplying electricity for the entire facility. All are managed using the Foxboro I/A control system.

All Foxboro field instruments – from pressure and temperature devices to magnetic, mass, pH, and conductivity devices – are all interfaced with the system by means of the FoxCom protocol, using remote I/O racks that are physically close to the process.

This helps keep the lines on-stream faster – and under budget – and it provides a strong avenue for future growth in production capacity. In fact, with this facility upgrade, Aracruz was the first pulp mill in the world to start up with all advanced controls in place and running.

Providing Cleaner Power for a Paper and Pulp Producer