If you are a 90’s kid like me, The Jetsons would have been one of your go-to cartoon series. Ah! The picture of Rosie the robot is still well imprinted in my head. Well, I believe Jetsons, in 1962, hinted a lot of possibilities in the world of automation right from the 60’s.

Take away from the Jetsons you ask?

When is it that automation hit the spotlight? Sources say in 1785, our favorite Nicola Tesla invented the first RC motorboat. From then on mankind set off on a never-ending journey of improvising the real definition of sophistication. In the 1900s man wanted to automate daily menial tasks to save effort, time and money and hence invented vacuum cleaner, washing machine, refrigerator, dishwasher and other home appliances that today we use as a necessity and not a luxury! Talk about contrast in perception!

Years passed and sensors, chips and processors were introduced. A breakthrough to somehow link these home appliances to these sensors was being thought of. That is when in the 70’s the era of IoT kickstarted. IoT is a concept where machines are connected to the internet through a gateway and controlled using devices like a phone or an HMI device. Ever since its introduction, it has been widely used in domestic and advanced industrial applications.

One very relatable application worth mentioning was on a humble Coke machine in Pennsylvania in the 1980s. The objective of this invention was to report how many bottles are present in a wending machine at a given time. It All started when, David Nichols a student in Carnegie Mellon University was craving for a soda. His office was “relatively far” from the university cafeteria and he did not want to make the effort of going till the cafeteria only to find the coke machine empty! So, Nichols with a help of a few friends, came up with an idea to monitor the contents of the machine remotely. All it required was a board of sensors, a gateway, a network connection (ARPANET in those days) and off course LOGIC.

So far, we saw automating various need-based appliances. But what about automating a home? Late 1990’s – 2000’s was when the concept of smart homes became the next big thing! This called for integrating home devices right from the front gate to the kitchen chimney, TV to lights, heater to AC can be controlled with just a touch on an App. Home automation has taken sophistication up another notch by enabling voice control as well. You can now use AI devices (Google Home, Amazon Alexa etc.,.) to command your appliances!

Many brands have come up with their own version of automation devices. Be it a simple smart plug launched by Ecommerce giant Amazon or be it the retro fit automation system called Wiser by French conglomerate Schneider Electric. And guess what? You can now buy them online! 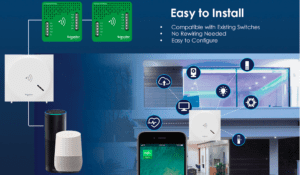