Many electrical fire risks are in plain sight. Old appliances, faulty outlets, and frayed electrical cords are easy enough to eliminate once you know to look for them. But there’s one insidious electrical danger that hides in your home: arc faults.

An arc fault is an unintentional electrical discharge within a circuit. Arc faults are caused by loose, damaged, or corroded wires and terminals. The low-voltage currents can’t be detected by circuit breakers or residual current devices. Over time, they generate enough heat to break down the wiring insulation and ignite any surrounding flammable material. 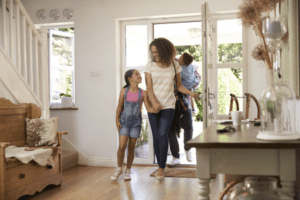 Electrical failures, including arc faults, account for 25 percent of building fires according to the European Fire Academy (EFA). Fortunately, they are avoidable watching for common causes and using proper prevention equipment.

Because arc faults are the product of damaged conductors and connectors, they can occur anywhere in your home’s electrical system. Some common trouble points include:

How to detect arc faults

Checking your home for any of the above risks is a great start to preventing arc faults, but the only way to detect these dangerous currents is with an Arc Fault Detection Device (AFDD). This device monitors for electrical arcs, using a special algorithm to differentiate between normal ones, such as those created when you flick a light switch or pull a plug from an outlet, and potentially dangerous ones. When it detects the latter, it trips the circuit.

AFDD’s are comparable in size to miniature circuit-breakers and are designed to fit in a standard residential electrical panel. An AFDD can work in conjunction with a circuit -breaker or residual-current circuit-breaker with overcurrent protection (RCBO), and may also incorporate its own switching function.

Although arc fault detection devices have been in use since 2002 in the U.S., where they’re known as Arc Fault Circuit Interrupters (AFCIs), they have only come to Europe in the last few years. Currently, Germany is the only country where AFDD installations are mandatory. However, IEC recommends the devices be installed in several residential and commercial environments, including locations with sleeping accommodations, flammable or combustible materials, or housing irreplaceable goods, or in structures where fire can spread rapidly, such as high rise buildings.