A few days ago Omar Gonzalez managed to scale the 8-foot perimeter fence that surrounds 1600 Pennsylvania Avenue. For those of you who might not recognize that address – that would be the White House; the home and workplace of the President of the United States of America.

Margaret Hartmann, in her report September 30th on New York News & Politics shows that this is not the first time this has happened. And Caroline Ramsey-Hamilton in her Risk Alert from September 22nd made some bold statements around what went wrong. I would like to take this opportunity demonstrate what went right – but most of all what can be improved upon in ANY campus or facility.

Coming up in the physical security industry, there was a lot of on-the-job-training. You just didn’t come out of school with a degree in Security. Only a handful of companies had what it took to sell “Critical Security.” I would certainly say the White House would be considered Critical Security. So, what do you offer such a client?

Let’s take a look back at the White House. When construction was completed on 1800, there was little known about terrorism, foreign or domestic. It was quite literally the house of the people. Designed to be open and a place where constituents could voice their consent to policy, and a place where the nation’s leaders would rally the nation. This was an open forum, the hub of the nation. There was no fence. There was no video surveillance system. There was little in terms of a protective force to guard the president.

Now let’s fast-forward. Post 9/11/01—yes 2001. Al Queada had done what was previously unimaginable. 13 years ago the paradigm shifted.  Barriers went up, fences and walls were built. The world as most industrialized nations knew it had changed.

The White House was no exception. A public landmark. Traffic was re-routed, the perimeter was secured, heck—they have snipers on the roof! That somehow did not deter Omar Gonzalez last week, who with his background must have known there was little chance of survival once he breached that perimeter. But he did it anyway.

So what didn’t work? Contrary to some posts—the White House does have electronic access control. They do have what is considered to be an adequate fence, and they do have video surveillance. Were all of those systems working? Could they be improved?

Simple answers: Physical security has changed. Security in depth—while not new is now more relevant. The concept is; Deter, Detect, Delay, Respond—Layered Security. The outer fence is intended to be a deterrent. In this case, it wasn’t. A breach of this perimeter therefore MUST be detected, was it? At this point the assailant MUST be delayed before reaching the intended target. Is the distance here—the major element of delay—adequate to guarantee the perpetrator will be intercepted? The front door was breached, was the response appropriate, and was the safety of the building occupants ensured at all times?

The following diagram depicts this in a very simple way. 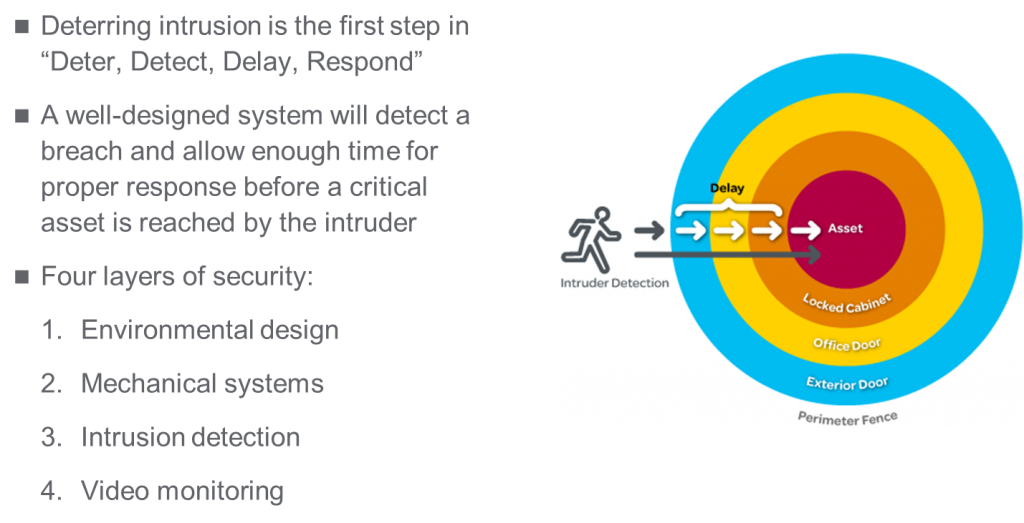 If the initial deterrence cannot be moved beyond physical (property) boundaries, how can this be improved upon? Simple, change the stage of detection. By moving the actionable phase of protection out from the physical barrier, the delay time can be significantly increased, and the time to respond is made manageable. This is achievable through video analytics and virtual perimeters. A combination of video analytic algorithms can be applied to; identify if a person is loitering, create a virtual trip-line that reaches beyond the fence and recognition analytics can be employed to detect repeat visitors. All of these video based additional countermeasures can be used to pre-alert security forces and minimize the possibility of a critical incident.

In recent days the White House security staff has added an additional temporary fence, adding a layer of deterrence and increasing the delay time. What also has come out in the news is the fact that this is now the THIRD time the same person has tried to gain access to the White House. The Secret Service had detained him twice before. While controversial, the use of advanced video analytics such as facial recognition can be a very effective tool. When deployed by expert integrators, this type of technology can automatically notify the proper responders in a timely manner and reduce the risk of both incident occurrence and, even if people and property are unharmed, the negative PR that results from such a breach. Omar Gonzalez was known by the Secret Service and with the proper tools in place they could have been ‘electronically on the lookout’ for him without needing to post personnel around the clock to do the same job.

In closing, Security In Depth is a very relevant and proven approach to critical security. However, it is not fail- safe in and of itself. A holistic approach that leverages People, Process, & Technology must be employed with a focus on automation as a core foundation at every layer to drive consistent, reliable response and timely resolution. When it comes to protecting federal facilities trusted solutions and experienced integrators are needed. Do you agree? How are you applying the Security In Depth approach at your facility?