The pasteurization and sterilization processes are among the most important unit operations in food processing. They consist of heating the food to high temperature for a predefined length of time. Those two processes aim to reduce the number of viable pathogens, so they are unlikely to cause disease. Compared to pasteurization, sterilization will bring the food to higher temperature which will kill all micro-organisms and allow the food to be kept for a longer time.

Both processes also consume a significant amount of energy in the form of electricity or fuel (steam production). They can have a big economic impact on the final product cost. In fact, the standard is very strict and production tightly controlled by individual country organizations (eg: USDA for milk in USA). Being over the temperature will alter the product quality, flavour and may accelerate clogging the pipes. Being under will require the product to be re-circulated and the whole production facility to be re-sterilized.

The pasteurization and sterilization processes are represented by the following drawing: 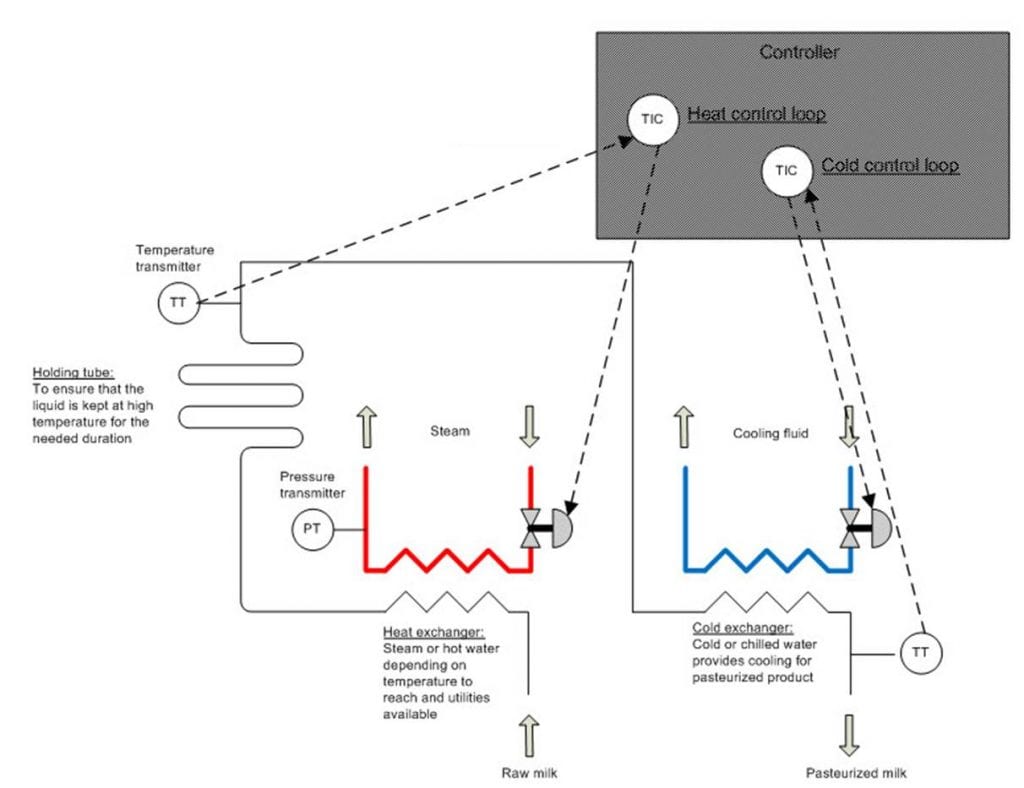 The raw milk is pushed to the heat exchanger to raise the process temperature requested (eg 138°C for Ultra High Temperature sterilization treatment, 72~75°C for pasteurization) this temperature is then kept for the requested time during its circulation in the holding tube. The milk is then cooled in the cold exchanger. The result is pasteurized or UHT milk.

Usually, the heating temperature is controlled by a PID control loop that results in a setpoint sent to the control valve which manages the flow of a hot fluid. The heating fluid may be a liquid or steam. It depends on the pasteurizer design and the temperature required.

The cooling temperature is also controlled by a PID control loop by sending a setpoint to a control valve which manages the cooling fluid flow in the exchanger.

As previously explained, the biggest challenge is on the heat control loop. There are several disturbances in the process that may set the milk temperature out of range. These disturbances are:

I have been working recently with a dairy to help them optimize their sterilization process.

The trend below shows the sterilization start phase when the system starts to push the water in order to reach the configured temperature setpoint (here, 140°C). The milk will be pushed only when the water temperature stabilizes at the setpoint value. 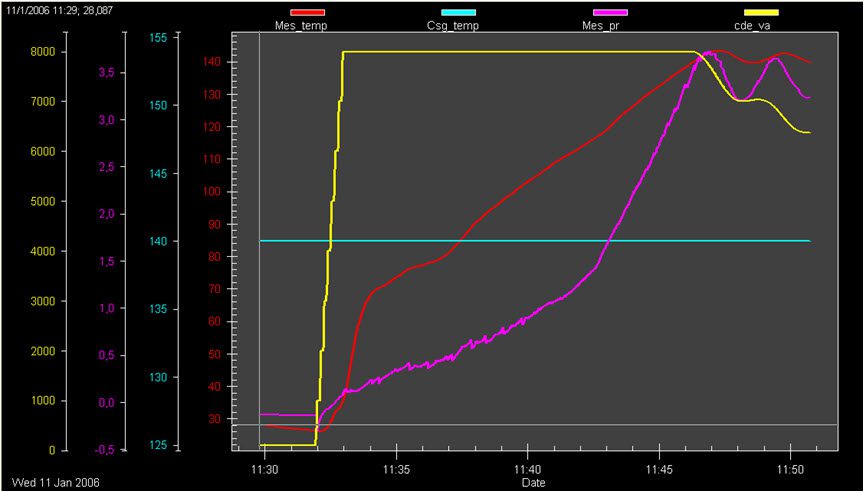 The temperature is represented in red, the valve output in yellow and the steam pressure in purple. We can observe that the temperature increased to 140°C then it incurs an overshoot of 3°C and a small oscillation.

The same overshoot appears when the water is replaced by milk which is pushed at twice the flow speed.

On the trend we can see that without any particular disturbance we already have an overshoot of 3°C. If at the same time we had a disturbance, our results would have fallen outside the 5% percent limit (+-8°C) authorized by the process. It would result in the need to re-sterilize the entire production chain (which takes about 30 minutes). In addition, the time to reach 90% of the sterilization setpoint (140°C) took 13 minutes.

We can also observe that pressure is proportional to temperature and the reaction is faster. This is due to the fact that when using steam to heat the milk, the pressure of the steam is directly linked to the heat exchange between steam and milk. The very interesting point is that pressure is reacting faster than temperature. It means that if we integrate the pressure in the control loop design, we can react to a disturbance before that disturbance impacts on the temperature and therefore limit the overshoot.

In addition we will use a model based controller (IMC). The main benefits of an IMC controller is that it embeds a mathematical model of the process which allows predicting the temperature behavior and reacting properly to disturbance.

In order to validate our theory, we re-designed the control loop and integrated IMC controller and steam pressure control.

The milk temperature controller gives the pressure setpoint to the steam pressure controller. The overall process drawing will be the following: 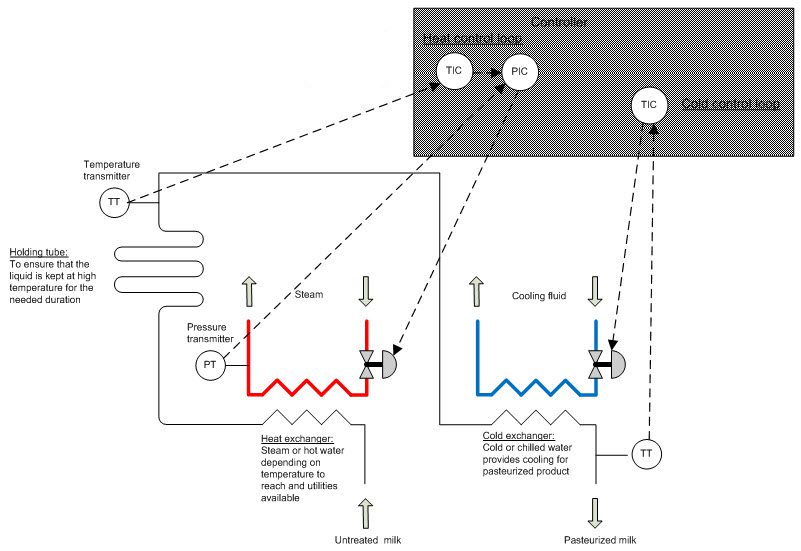 After implementing this new control loop design we re-started the sterilization process in the same conditions as before.

The result was the following: 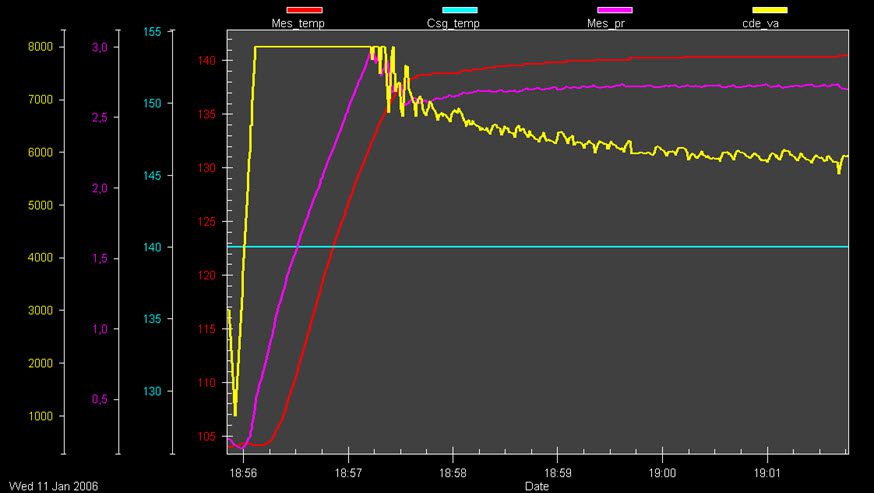 In the month following the test there were no stoppages as a result of the temperature setpoint going above or below the 5% margin of error.

A month later, the controller re-design has delivered both energy savings, and an unexpected downtime reduction.

The results we have for the sterilization process are the same as the pasteurization process, as both are very similar processes.

Next generation pasteurization…what if you could pasteurize water with light?