“Energy” has already reached recognition on the sustainable development agenda, but it took two decades after Agenda 21 for the universal access to energy to be finally defined by the United Nations (UN) as one of the goals to be adopted by all members until 2030. Among the 17 Sustainable Development Goals (SDG), there’s the undisputed right of access to cheap, reliable, sustainable and modern energy for all. It can bring relief to over 1.1 billion people who live in darkness. It would also require an investment of $ 1 trillion according to the World Bank. Brazil and also some other South American countries are likely to be left out of this discussion because, as we have  largely clean energy, it apparently does not concern us. But is it so? 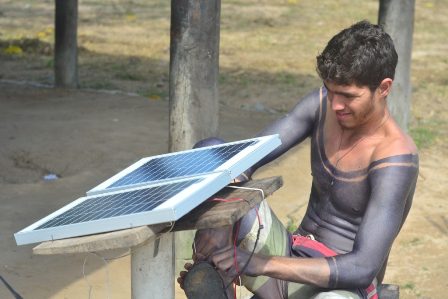 The South American continent is threatened by the weather while it ranks among the major potential emitters, as the region has the second largest oil reserves in the world after the Middle East, according to OLADE – Latin American Energy Organization.

From the trendy coast of São Paulo to the rustic Galapagos Islands in Ecuador, the unavailability of a conventional electricity grid is solved with the help of diesel and gasoline. Life in these areas and in many other communities is organized according to the availability of sunlight and it is during this period that families work and produce their livelihood. In remote locations, a powerful 30 kVA generator is turned on to power no more than 15 bulbs and four televisions in 20 houses for only 4 hours. They use around 30 liters of diesel per night, but only 15% of the energy produced by these generators is actually used. What about the rest? Well, it is wasted by design flaws or irregularities in the installation. On average, the cost per family living in these conditions in South America is around US$ 30. This amount does not take into consideration the economic and health damage as much of the local production is lost for lack of refrigeration or due to the consequences of the smoke produced by the old engines and kerosene lamps.

Last May, in New York, the United Nations’ Sustainable Energy For All (SE4All) initiative highlighted that the reduction from 4.3 to 1.1 billion people without access to energy in the last decade was possible due to the government’s investment and the public-private partnerships. These two factors led to the creation of inclusive business models. In Africa and Asia, for instance, this business has become attractive to startups and SMEs, which helped to accelerate the change.

In Latin America there are few known models. Protectionism policies are still a barrier to the inflow of foreign investments. However, an interesting example comes from Costa Rica, which began to subsidize the expansion of conventional power grid in the 1980s and shared the information about which locations would receive electricity and when it should happen. The next step was to allow local cooperatives to provide the network maintenance service and charge for it. The result was that in 2005, Costa Rica had already reached the unprecedented rate of 100% of households with access to energy.

Since its foundation in 1950, this is the first time that the United Nations approaches the private sector to pursue an assertive model that brings together public policies with potential business models to mitigate the problem of lack of energy for everyone. The feeling between member nations is accepting that solving the problem of lack of clean and reliable energy through the development of a new market and new economic activity. The paradox is that, while in some aspects the topic moves fast, it also seems to move as slowly as the perception of a child eager to reach their destination. In this case, we are still Latin American children who ask, “How much longer?”

Enabling Global Access to Energy for a Better Life