In response to the question “What’s the difference between standards IEC 60898-1 and IEC 60947-2?”,  I’m tending to answer with another question: What do they have in common?  They are both standards that specify requirements for low-voltage circuit breakers. Is there more in common than different? Let’s look into it.

IEC 60898-1 relates to a.c. low-voltage circuit breakers for household and similar applications– also known as MCBs (miniature circuit breakers)– which we find in homes, schools, shops, and office electrical distribution switchboards. The standard states that the maximum rated current is 125A, while the lowest is a few amps, and the maximum value of rated short-circuit capacity (Icn) is 25kA. Those basic tech specs alone tell us just how different the use of circuit breakers (CBs) are as defined by the two standards.

Yes. The rated voltage currently required in industrial use CBs is 400 V, 440 V, 690 volts, or higher values up to 1000 V. Compare those numbers to the usual value 230V/400 V for residential MCBs.  Reference ambient temperature is 30°C for households. The same goes for impulse withstand voltage (Uimp), IEC 60898-1 requires 4kV, in line with the use for final circuits. Whereas for industrial circuit breakers, the usual values of Uimp are 6 or 8kV, in line with the position of the circuit breaker at the origin of the installation. 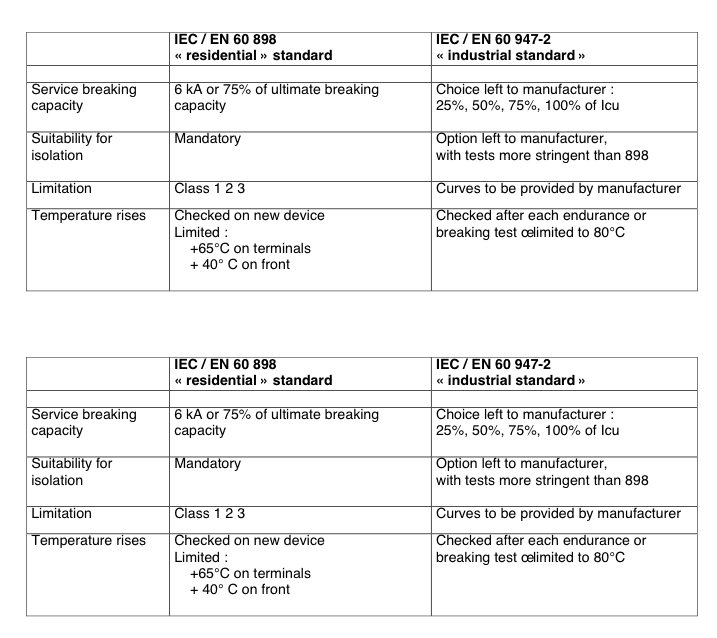 Who often confuses the two standards and how?

Oftentimes users confuse the standards – particularly “prescribers” e.g., those people who draw up specifications in invitations to tender. Utility procurement managers can also get things wrong. As to how they mix up the standards, I can’t say for certain. But happen it does.

The history of standard IEC 60947 may have something to do with it. The concept behind it evolved in the 1970s-80s when it was a single standard for all low-voltage switchgear. That notion, combined with a lack of knowledge or technical expertise, may have led to the misconception that there is only one standard for all CBs. Of course, it wouldn’t matter so much if people thought it was IEC 60947-2.

No. Consequences can be serious if residential CBs are used instead of industrial ones. An MCB designed for indoor, pollution degree 2 conditions would be inadequate for harsh, outdoor applications that require pollution degree 3.

Or take the tripping characteristics: IEC 60898-1 clearly describes B, C, and D curves with ratio to rated current, while in IEC 60947-2 the instantaneous tripping release may be adjustable according to the need of the user, or pre-defined by the manufacturer, with ±20% tolerance. This is the reason why manufacturers additionally provide a wide scope of different curves: K, Z, MA.

Typically IEC 60898-1 certified circuit breakers meet required performance to prove proper protection of household installations: Pollution degree 2, impulse voltage 4kV, isolation voltage is the same as nominal voltage 400V. Also, the requirements of this standard are adapted for non-technical users which is why limited technical information is printed in detail on CBs. 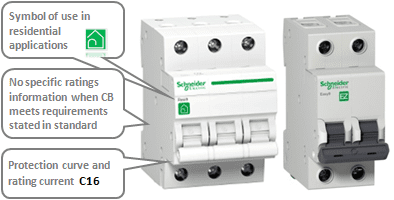 Example of Resi9 and Eazy9 circuit breakers for residential applications

These certified CBs are intended for indoor use, and under pollution and humidity-free conditions: households or similar installations where overcurrent protection will not likely be maintained by unskilled users. In other words – in the final distribution electrical switchboards of buildings in which the nominal current does not exceed 125A. Usually, these circuit breakers are sold by electrical retailers: they are simple to install, safe, and easy to use even after many years without maintenance. 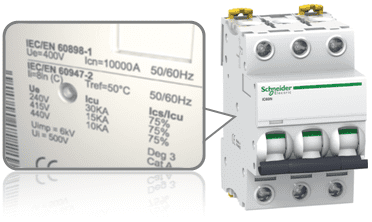 The most suitable solution is for MCBs that are certified by both IEC standards since their performance meets requirements for use in residential installations and is high enough for use in industry and infrastructure applications. Due to the high level of protection performance of these CBs, they should be used at least for the incoming electrical switchboards in buildings applications.

Appliance for MCB’s to standards in different applications of use

I can say is that mix-ups of standards happen. The ideal way to avoid them is with tightly worded and highly enforced national regulations. And, for prescribers to specify what CBs will be used for and then confirm that the standard governs that usage.

Have you ever mixed up the two standards? Leave us your comments below!