Surge Protective Devices (SPDs) are designed to limit damage from electrical surges. Surges happen extremely fast and may pass through electrical breakers before the breaker can trip. This is because breakers are designed for over current protection, and not surges. Electrical surges can become powerful enough to damage or kill downline products that include electronics. Even if downline products continue working, their product lifespan may be reduced.

Surge protection has become even more important these days as many more products include electronic chips. Even LED lighting can be affected by surge activity. While commercial/industrial surge applications have been around for years, the NEC 2020 code was updated to mandate surge protection for residential dwellings as well.

Surge protective devices remain passive until a line voltage exceeds the turn on voltage of the SPD’s internal components, as shown in Figure 1. When that occurs, SPD components become conductive and shunt excess current away from the line, typically to a grounding conductor, as shown in Figure 2. The remaining Let-Through Voltage passes downstream along the circuit. These transient overvoltage events occur over fractions of a cycle, thus lasting only for microseconds. 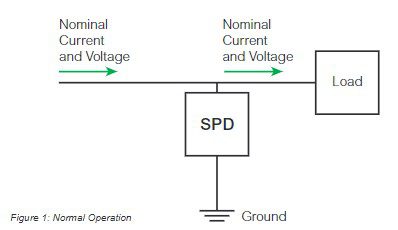 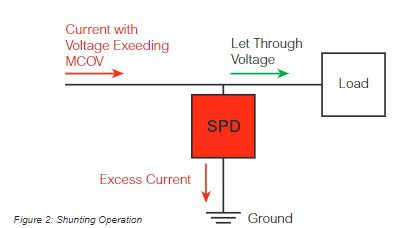 The amount of current that an SPD can safely shunt is its Surge Current Rating, which is also known as Surge Capacity. This can be presented as a per mode or per phase rating and the resulting value is specified in thousands of amperes (kA). Alternatively, this rating may be published as a total surge current rating for the SPD, which may be estimated by summing the current capacity of its surge components or verified by testing the SPD as a complete assembly. The higher the surge current rating, the more protection the SPD supplies.

Nominal Discharge Currents, often marked as Inominal or In, indicate the amount of current to which sample SPDs have been subject during UL 1449-prescribed tests. Inominal ratings are required to designate the SPD Type, which indicates the environments in which an SPD may be installed. For example, to receive a 20kA Inominal rating, the SPD must survive fifteen 8×20 microsecond transients at 20kA as well as other safety tests.