This is a post in our series on motor management, covering various aspects of motor integration in an electrical network and the industrial process.

In power systems, harmonics are sinusoid signals, multiples of the fundamental signal frequency. Those signals merge with the fundamental signal, which is then qualified as polluted. Harmonics are present at the same time in both voltage and current signals. They not only affect power lines, but also neutral conductors with specific third harmonic from single phase loads. 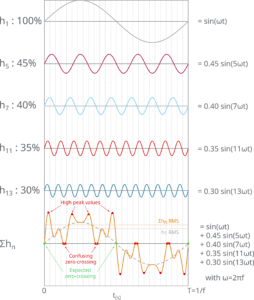 Harmonics can be tolerated under certain limits. But harmonic impacts become problems when exceeding those limits. Harmonics increase the signal RMS value, which generates current and heating increase in conductors in the long term. It leads to additional losses and thermal aging acceleration. The resulting signal distortion can also induce high-frequency peak values and other than the fundamental zero-crossings. In the short term, harmonics can cause disturbances to devices using rms, peaks values, and zero-crossing triggering. Harmonic high frequencies signals induce vibrations in rotating machines and transformers, leading to mechanical aging acceleration. As we can see, harmonic concrete implications are numerous, and repercussions can be significant. It widely covers the process operation, the whole installation maintenance, and the electrical distribution, with substantial cumulative cost impacts.

Typical harmonic sources are rectifiers. In industry, the most common and powerful devices embedding it are Variable Speed Drives (VSD), and Low Voltage VSD are those with higher impact by standard design. The VSD proportion compared to the Direct On Line operation in industrial motor controls can be disparate. The harmonic global pollution depends on such load mix, but also on the respective loading. In any case, as soon as there is any LV VSD in the presence, the harmonic impact must be tackled.

The most common mitigation solutions to constrict harmonics are Low Harmonic specific LV VSD and Active Filters. Low Harmonic (LH) option directly and drastically reduces the harmonic impact of the considered LV VSD. Active Filter (AF) is an electronic device injecting adaptative counter-harmonics to neutralize targeted harmonics, either stemming from one or several loads. The choice of a mitigation solution, either constant and dedicated LH VSD, or adaptative and mutualized AF, or eventually a mix of both is a compromise between performance all along the process operation and investment. 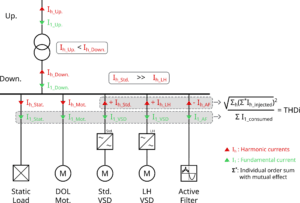 Harmonics extent, as well as the mitigation solution effect, can be estimated in relevant process loading contexts. The aim is to keep harmonics under reasonable limits. A THDv under 5% at main busbar is a typical objective, but the IEEE-519 standard defines in even more detail the acceptable limits of harmonics induced to the upstream network at the common point of coupling.

Harmonic estimation is mainly achievable through calculation tools, which are also essential to validate mitigation strategies. Those tools are few and most are experts. But among them, Motor Management Design (MMD) is an accessible tool for design purposes, including exhaustive harmonic calculations. It advantageously assesses individual VSD harmonic contents based on Schneider Electric VSD ranges and proposes an adequate active filter if needed. 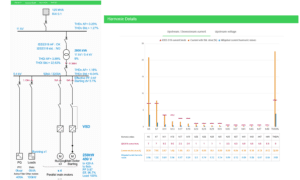 MMD display of the analysed SLD and the resulting harmonic content

Harmonic pollution is yet another manner of long-term vigilance. Even though mitigation might be fully achieved in the past, harmonics can yet reappear. Processes, loads, and loading typically evolve in time and in particular as motor control moves towards developing into more VSD. It is therefore highly recommended to keep monitoring Power Quality to timely detect abnormal harmonic levels. It can be done locally through adapted power monitoring devices or globally on a large network through Power management software and Power reliability services. Of course, in case of noticeable and unexplainable troubles, an audit can especially be conducted to closely investigate.

Make your own experience:

5 ways to solve the harmonics challenge