I remember a time when ideas like environmental protection, climate neutrality, and energy efficiency were political issues. When these issues were discussed, camps on either side of the issues divided into “activists” and “realists”; the Greens and the Conservatives. Some went on to demonstrate and others went to the office. These were the 70s, 80s, and 90s of the past century. 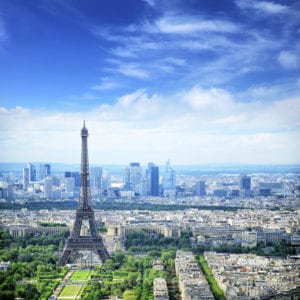 At that time, it would have been unthinkable for a whole continent to declare its climate neutrality – and consequently deriving new business models with the restructuring of an entire economic system. But Europe simply put it into practice calling it #GreenDeal. In December 2019 at the UN Climate Change Conference (COP25), while the overall outcome of the conference was mostly discussed negatively, the European Union took a bold commitment to become the first carbon neutral continent by 2050.

But what happened first? There was no debate on the finite nature of resources or consumer behavior – neither on an individual, social, nor corporate level. The economic growth of the Western industrial nations was accompanied by the consumption of energy and an increase in environmental pollution. Traveling, individual mobility, and consumption met with the corresponding supply that business and industry provided. Although the oil crisis of the 1970s highlighted the dependence on oil imports, the world was still far from a fundamental shift in thinking.

What happened since?  In the past 10 years, the megatrend neo-ecology reached all levels of society, politics, and – eventually –   industry. Thus, in December 2015  – after years of negotiations by the international community  –  the Paris Climate Agreement was concluded at the Paris Climate Conference (COP21), and formally ratified by the European Union on October 5, 2016.

With the worldwide school strikes of the Fridays for Future movement, the issue came from the streets and into our living rooms. Our children are asking us what condition we will hand over the world to them – the young generation.

Many of us who today bear responsibility in the economy, politics, and society have become successful with this paradigm which has been shaped by growth, the belief in almost inexhaustible resources, and a focus on what is technically feasible. Considering any environmental influences even then was beyond this paradigm. And to take it even further, the idea that economically successful companies should also assume responsibility for their affect on the environment and society was equivalent to a Marxist attack on the entrepreneurial ideal.

That has changed. For good.

Sustainability becomes a matter of course

Anyone who brings a product to market today and neglects environmental factors – whether they arise on one’s doorstep or in China, India, or elsewhere – will soon no longer be economically successful. This also applies to buildings, industrial plants, power grids, and mobility concepts … to everything and everyone.

Society is sensitized, the younger generation most of all. They are mobilized. Politicians have started creating frameworks and incentive systems; the EU is calling for the Green Deal,and despite facing a global economic crisis triggered by the current pandemic, this change of direction stays out of question. Quite the contrary, it is confirmed, emphasized, and implemented – as we shall experience. 30% of the unprecedented €750 billion recovery package recently adopted by the EU will be dedicated to climate change investments.

We will not turn back globalization-. That is why we will examine our processes in-depth and check them for sustainability and resilience. This includes our supply chains and our business models; our personal buying and our consumer behavior. Those who have not yet started will have to do so in the future.

Our common challenge today in this complexity is to find solutions that are economically successful, sustainable, and fair. Working hand-in-hand with society, politics, and business.