Home Energy Management Energy Regulations What is the impact of LED luminaires on lighting control?

Efficiency and sustainability continue to be popular buzzwords when discussing building construction and retrofits. That’s because, as global population continues to grow, energy consumption and demand continue to increase exponentially. Energy consumption since 1980 has increased an estimated 45% while electricity demand is projected to double between now and 2050. Reduction of this demand is critical to maintaining sustainable growth. This requires a more aggressive approach to improving the energy efficiency of buildings.

According to the U.S. Energy Information Administration, in 2018 the residential and commercial business sectors accounted for roughly 40% of the U.S. energy consumption, with lighting making up 10% and 17% of this demand respectively. As we can expect ongoing development and upgrades in the residential, commercial, and industrial sectors, lighting is one of the fields with great opportunity for improving energy efficiency.

In response, one of the core advancements in commercial and residential lighting has been the development of the LED luminaire. Compared to other lighting sources, LED technology has the advantages of:

LED luminaire technology is an excellent choice; however, due to its core driver component, its behavior is unlike its incandescent or fluorescent predecessors. See the figure below. 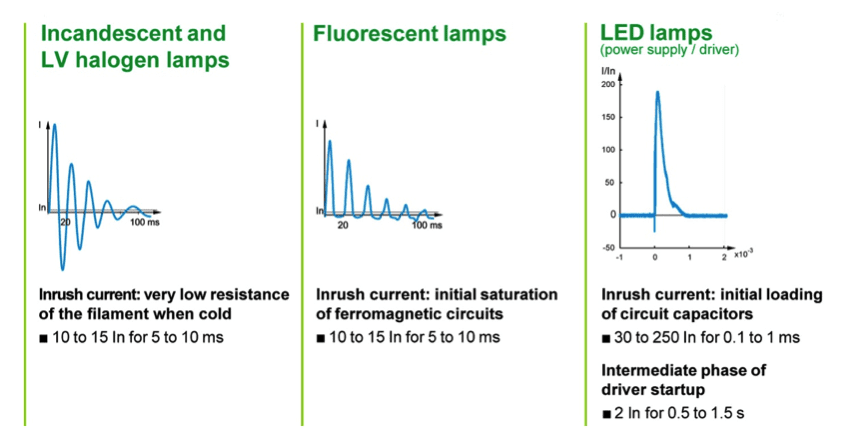 When the LED luminaire is energized, there is a potential for inrush values of 30 to 250 times the rated current, lasting approximately 1 ms. This initial inrush period is then followed by a period up to 1.5 s with a load of roughly double the rated current while the power supply is energized. These LED startup characteristics are critical when appropriately sizing lighting contactors for the load requirements.

Complying with the standards

In North America, Schneider Electric has tested, for internal verification purposes, the design of its Class 8903 Type L/LX and Class 8903 Type S lines of lighting contactors against the UL and NEMA specifications. We have confirmed that our offers not only meet, but exceed the desired results based on the listed testing guidelines. This provides peace of mind to the installer and user of these models of Schneider Electric lighting contactors when using in conjunction with LED luminaires. This applies to any new installations or retrofit projects in commercial and industrial buildings.