Most circuit breaker life cycles are based on periodic maintenance inspection and operation specified in the manufacturer’s circuit breaker instruction manuals in order to have longevity. However, as technology, reliability, and safety needs have evolved in the energy market this has a created a need to look at upgrading these older obsolete breakers. And while there has long been a secondary market for obsolete breakers, maintaining them is challenging, and using them can even be risky.

Thus, let’s take a look at some of the misconceptions and realities surrounding obsolete circuit breakers.

Myth: Maintaining an obsolete circuit breaker is more cost-effective than replacing it.

Reality: Not exactly. Yes, maintaining an obsolete breaker, particularly if it’s a recently decommissioned model, can be less of an upfront investment. In the long haul, however, cost savings will dwindle.

The availability of spare parts presents the biggest (and most costly) challenge in maintaining obsolete breakers. Over time, acquiring spare parts necessary to keep the breaker in working condition becomes harder and more expensive.

While you may find, say, an old Square D breaker on eBay that’s identical to what’s used in your facility, its scarcity may mean you have to pay 7-8 times the original cost. There comes a point where maintaining becomes cost prohibitive and the most cost-effective course of action is to go with a newer, modernized solution.

Myth: Purchasing a refurbished breaker is a safe option.

Reality: Even if purchased from a reputable seller, using a refurbished or reconditioned breaker can still introduce risk. Since the equipment is not coming directly from the manufacturer, its traceability is lost, and you don’t really know where the parts or the breaker have been.

Plus, refurbished breakers are not endurance tested to the manufacturer’s standards — especially for molded case breakers. The reconditioning world claims to meet industry and manufacturer standards, however, they test to the InterNational Electrical Testing Association (NETA) standards which differs from the manufacturer’s, which are Underwriters Laboratories (UL) or American National Standards Institute (ANSI). If the equipment doesn’t meet the original requirement, it can lack safety features and other critical specifications.

Reality: While not impossible, this is extremely challenging and uncommon. Originally, the breaker was developed and designed for the standards of that time. As such (and if at all possible), a great deal of retrofitting would be needed in order to get the equipment in compliance with newer standards.

Myth: Replacing an obsolete breaker means replacing all my equipment.

Reality: There are several options for replacing an obsolete breaker. If the infrastructure is still in good shape, then the breaker can easily be upgraded with either a direct replacement or retrofit solution. Both are designed to fit within existing equipment with minimal modification and downtime. 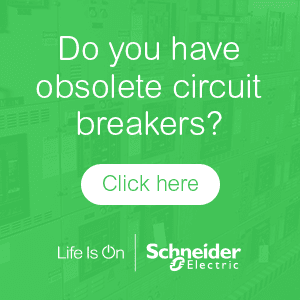 If an extended period of operational downtime can be afforded, then replacing with new equipment is a viable option.

In cases where the obsolete breaker is situated in a hard to reach location and bringing in new equipment would be extremely challenging and costly, modernizing is the only option.

What to Consider When Replacing Obsolete Breakers

Keep these three key factors in mind when making the case for replacing or modernizing obsolete breakers:

There’s a misconception that obsolete breakers can be used without risk. In reality, you’re taking a chance. Modernizing and upgrading to new technology can help reduce maintenance costs, enhance safety and provide higher performance.

Read our whitepaper on improving switchgear reliability to learn how.