For more than 100 years, perhaps with the exception of deregulation, the core business model of the global electric power industry has remained largely unchanged. In this business model, centralized electricity generation is transmitted and distributed over power lines to end consumers in what can be characterized as a uni-directional flow of power. More recently, the proliferation of renewables and other distributed energy resources (DERs) has begun to test many of the long-standing assumptions underpinning this business model and is driving innovation as prosumers (producing-consumers) seek to monetize the flexibility of their DERs using bi-directional power flows. In the future, countless DERs of all sizes and varieties, accelerated by rapidly advancing technology, will create new market opportunities for prosumers to optimize and monetize their “grid-enabled, responsive resources” (GERRs) in a multi-lateral, peer-to-peer (P2P) marketplace. 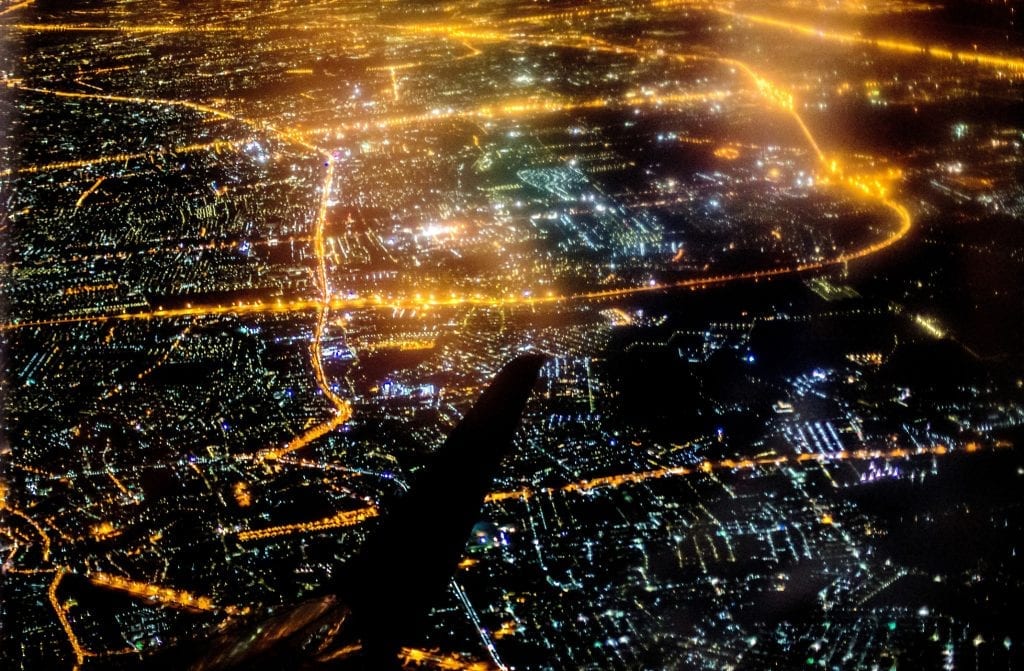 Without a doubt, today’s electricity grid is the largest and most complex machine in the world. Flying over a city at night gives one an appreciation for just how sprawling and interconnected this modern marvel is in reality. One can think about nearly every twinkling light on the ground below as an asset connected to the grid ecosystem.

What is truly amazing to consider is these lights represent only a small subset of the many assets connected to the electric grid at any given point in time. In a very simplistic manner, lights serve as markers reminding us of the complex, interconnected network of assets, or nodes, within the grid system. While any individual node (n) is small in relation to the overall network, each has properties which contribute to the operational stability and financial composition of the system.

Robert Metcalfe, electrical engineer and co-inventor of Ethernet, theorized that the value of a network is proportional to the square of the number of connected nodes (n2) in the system.1 Other similar hypothesis have been proposed as well (for example, n log(n))2.

Regardless of the math, most would agree with the “network effect”: that the value of a network increases as more nodes are added. This same principle holds in energy grids, such that the number of connected nodes increases the inherent value of the overall network.

In this respect, the modern power grid can be thought of as more than just a machine, but rather a superorganism of sorts, a complex adaptive system or swarm intelligence that must continually reorient and optimize itself to account for the collective behavior of individual, autonomous nodes in order to achieve balance in real time and avoid failure.

To date, grid optimization has been provided largely by central operators. However, the tools used to achieve this balance are relatively clumsy, like a surgeon performing an operation with a sword instead of a scalpel. Large, centrally controlled assets are sub-optimal to provide the speed and accuracy required to affect the continuous balancing of supply- and demand-side assets in a grid ecosystem, especially in a world of ever-increasing DERs. To achieve this balance, excess (and often expensive) generation capacity, coupled with specialized resources like spinning and synchronous reserves, is necessary.

The disruptive power of innovation

Many questions arise as we look to the future of the electric grid. What will the grid of today look like tomorrow? Is there a better, more cost effective, and reliable way to operate grid ecosystems? Could a power grid function without a central operator? How will advancing technology change the landscape? Is the value of the grid shared equitably among participants?

We are entering a period of unprecedented innovation. The cost of technology continues to decline rapidly while its capabilities in terms of compute, storage, and bandwidth are improving exponentially. Tiny, low-cost, high-powered, and communications enabled microchips are becoming embedded in everything around us, which will lead to ever-increasing asset interconnectivity as the internet of things (IoT) takes root.

Theoretically, what this means for the power industry is that any asset physically connected to the electric grid with onboard communications and computing capability, is an autonomous node that could respond to a command signal. Such assets can be thought of as “grid-enabled, responsive resources” (GERRs). GERRs differ from the current definition of DERs in that while all DERs are decentralized, GERRs are also intelligent, communicative and controllable, and thereby able to be coordinated in a way that benefits the overall grid ecosystem and resource owners.

Similarly, rapid improvements in artificial intelligence (AI) technology and the ability to apply AI to synthesize “big data” are creating opportunities to optimize autonomous assets in a fast and accurate manner.

Further, new and rapidly improving distributed ledger technologies such as blockchains, Tangles, Hashgraph algorithms, and others are enabling value exchange (i.e., kilowatt-hours for money) in a transactionally efficient manner without central oversight. This means one day soon, a node in a network will be able to exchange value with another node in the network quickly, securely, at an exceptionally low cost, and with no third-party intermediary.

Just as important as technology innovation, business model innovation is occurring within the power industry. Today, certain end users can sell energy back to the grid through net metering, feed-in-tariffs, or other similar structures. But what if an end user wanted to sell electricity to the neighbor next door or bank that energy virtually for future use? It may sound far-fetched, but in fact, these very concepts are being tested in pilot projects around the globe.

Amazon, Airbnb, Apple, Uber, and others give us a sense for how rapidly business model innovation, leveraged by nascent companies, can disrupt established industries. Airbnb, for example, is the largest provider of lodging-as-a-service, yet it owns no real estate. Similarly, Uber is the largest provider of transportation-as-a-service, yet it owns few vehicles. These two companies, with limited to no physical assets, have been able to disrupt established hotel chains and taxi services by innovating new business models that deliver greater value to consumers.

These and other drivers are creating an opportunity for peer-to-peer economies to emerge within power networks that could enable grid prosumers to monetize the flexibility of their GERRs as they gain greater control, choice, and transparency over their energy equations.

Herein lies the key to the future of a modern, adaptive grid. The future of electricity is not as a cost center, but as an asset, and potentially even as a service, to be optimized and monetized as prosumers and innovators seek to recapture an ever-greater portion of the total value chain.

Years ago, the phrase “every company is a tech company” was coined. Forbes summarized it like this: “Every company is a technology company, no matter what product or service it provides. The companies that embrace this fact are the ones that shape our world. Today, no company can make, deliver or market its product efficiently without technology.”3

We are approaching a period where “every company is an energy company”. While perhaps future state, this declaration gets to the heart of the prosumer movement and the concept of a burgeoning grid superorganism Schneider Electric refers to as the MeshGrid™ ecosystem.

Broadly, MeshGrid represents a move from an era of centralized “command and control” to one of decentralized “continuous automated optimization” where the meshing of physical and virtual worlds, coupled with the shift of consumers to prosumers, fundamentally alters the supply-demand relationship as GERRs of the future play a role on both sides of the economic equation.

Futuristic, you say? So was the internet 20 years ago. The question that remains and the one that causes innovators to disrupt industries just like ours: why not?

Learn how you can prepare for a MeshGrid ecostructure with Active Energy Management.