This post is more of an appetizer compared to a more hearty meal which is to follow. The main course served later delves into a study on LNG exports and their potential economic impact. But before tucking into that, it seemed prudent to recap recent events regarding LNG exports and all that gubbins.

–The two facilities are authorized to trade with all Free Trade Agreement (FTA) and non-Free Trade Agreement nations (think: Japan). Most of the terminals going through the approval process have already been approved to export LNG to FTA’s (…because the US only has FTA’s in place with 20 countries – it is not considered a significant market).

–The two facilities have been granted the ability to export 3.6 Bcf/d combined. Current US marketed domestic production is just shy of 70 Bcf/d, so if domestic production only shows a minor increase in the coming years (as is the base case of the EIA), this volume would account for 5% of total production. Not an inconsequential volume.

–The DOE has been assessing 20 applications for export terminals in the last few months, which if all approved, would present the prospect of well over a third of US domestic production being shipped out each day. Scary? Yep! Likely? Not on your nelly.

–Some of the more bullish projections still only expect approval of 6.5 Bcf/d by the end of the decade. As for the 3.6 Bcf/d already approved, this is maximum capacity that could be exported, and doesn’t necessarily infer it will be. 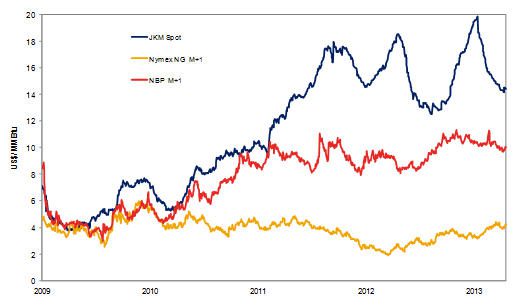 –The opportunity for LNG exports is perhaps best exemplified in the above chart. While US natural gas prices are around $4/MMbtu, Europe pays closer to $10/MMbtu, and Asia….close to $20/MMbtu in recent times.

The crux of the LNG export debate is to find the right balance between approving enough volume as to spur on the maximum economic benefit through job creation and trade deficit reduction without significantly boosting prices. Which is something we will delve into in Part 2.

Given the recent events outlined above and the response by the natural gas forward curve (hark, a swift rally), although momentum is building for more approvals, we potentially are more than halfway through this process already.

As mentioned at the beginning, the next post delves into a in-depth study into the impacts of LNG exports on the US economy. But hopefully this has provided some background on LNG exports…and whetted your appetite for the main course!