The International Standards Organization is probably most famous for ISO9001, which defines Industrial Quality Management standards, and ISO14001, which is central to Environmental Management Systems. Sure, you can build a manufacturing facility without complying with these standards, but you probably wouldn’t have any customers—they not only are models for best practices, but have become market expectations in industrial markets all over the world. 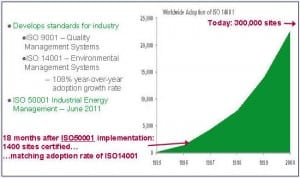 The way these standards spread across the globe follow a very similar pattern: adoption starts in Europe and Asia, where governments create incentives or laws to stimulate compliance.  Since many large U.S.corporations have operations in those continents, they have to comply for the plants in those regions…and the seed is planted.  Soon enough, those U.S.corporations seek to extend the benefits of compliance across their enterprise also requiring their suppliers to comply and further influencing the rest of the value chain.

ISO50001, entitled “Energy management systems — Requirements with guidance for use”, was only released 19 months ago, but is already showing signs of this same explosive growth pattern.  As of the end of January 2013, 1400 sites have achieved certification, which matches the early adoption rate of ISO14001.

What isn’t representative in this statistic; however, are the hundreds if not thousands of sites implementing the standard without pursuing certification.  This is because the standard, even without the certification status, gives credibility and structure to an Energy Management initiative adopted within an industrial process facility, saving energy cost, reducing downtime, improving energy reliability, and contributing to Sustainability Strategy.

Whether seeking certification or not, early adopters of ISO50001 are well poised to leverage a competitive advantage as this standard quickly spreads and sets the bar for process energy efficiency and sustainability strategy worldwide.

More can be learned about the standard at the ISO website.

If you’re ready for implementation, there’s a great 3-day course that goes over all of the details.

To industrial end users in the US: Are you familiar with ISO50001 already?  If so, are you starting ISO50001 compliance initiatives yet?