Smoke alarms are critical for the safety of every home. For most cases, the features that allow these devices to detect fire in its early stage can mean the difference between life and death.

However, failing to install smoke alarms correctly can affect their ability to perform at their optimal level and can even cause annoying false alarms. So, it is important to consider proper placement and procedures when installing these devices into a property.

Identify the best location for a smoke alarm 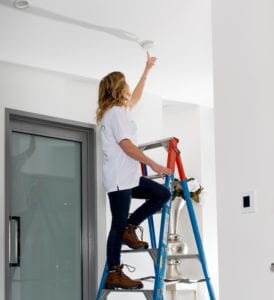 When installing smoke alarms, the first thing to do is identify the best location. According to building regulations, at least one alarm is needed on each floor of every home and positioned in the hallway near the bedrooms. Additional alarms are recommended in bedrooms, lounge room and other living areas for the earliest warning possible. It can be along the home’s escape paths to assist in evacuation during limited-visibility conditions or at the centre of a ceiling. Position it where it can detect smoke effectively and avoid potential environmental factors that may lead to false alarms. Following the instruction manual, the building code and local building regulations for your state is a must.

Avoid mounting smoke alarms in areas where there is dead air space, such as close to a wall, in a corner or a bulkhead. When installing near air conditioner outlets or return ducts, always position one metre away to ensure smoke is not dispersed or blown away from the smoke alarm. This also avoids dust particles either in the air conditioner vent or on the edge of the alarm from being blown into the sensing chamber, leading to false alarms.

Other locations to avoid:

Avoid wiring from a close feed that goes to a ceiling or exhaust fan. When fan motors are switched on or the fan speed changes, the switch can arc from back EMF. This can generate a lot of electrical noise which may affect smoke alarms. Ideally, wire smoke alarms on a separate circuit.

To avoid potential damage, never wire interconnected alarms across phases. Always wire on the same circuit, using a common neutral point for all alarms if possible. Large loads when switched on, like heat lamps, may cause voltage drops on the neutral that get detected as an interconnect signal, causing false alarms.

Keep interconnect wiring as far away as possible from high current cabling runs, such as those going to an air conditioner. This avoids the magnetic field from other cables inducing voltages into the interconnect cable, potentially causing false alarms. 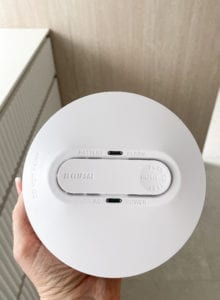 Gyprock dust is one of the major causes of false alarms. As such, it is vital to keep smoke alarms free from such elements.

Before drilling or screwing the alarm base to the ceiling, make sure the smoke alarm is far away from falling gyprock dust and ensure the protective dust cover is in place.

Ensure the base sits flush to the ceiling to avoid dust entering the smoke alarm and to ensure the smoke alarm will clip in to the base correctly. For an uneven ceiling, mount the base as flat as possible, using four screws.

Before latching the smoke alarm into the base, ensure the 9V battery is inserted correctly. Likewise, if using an alarm with a rechargeable lithium backup battery, ensure you activate the rechargeable batteries first by sliding the switch on the back of the alarm.

It is a good idea to spray insect surface spray on a cloth and wipe the ceiling around the alarm to deter insects. Also, make sure to leave the installation instructions with the home owner and remind them about regular maintenance – test every month, vacuum alarm and re-apply insect spray if needed every three months, replace battery every year and replace the whole alarm every 10 years.

Your Attention Please! How to Combat Alarm Fatigue in Hospitals

How to get on the road to Smart Machines: The ABC’s of Alarm Management

Tips to Maximize the Life Expectancy of Your UPS System