One of the biggest threats to your home is lurking right inside it. Electrical issues cause more than 20,000 fires a year in the UK and upwards of 45,000 in the US each year. Fire isn’t the only danger; 30,000 non-fatal shock accidents occur annually in the United States while 350,000 people per year are seriously injured by electric shock in the UK.

An easy way to protect your home and family is to take the following actions.

Make sure your electrical panel is up-to-date

As your service panel is the heart of your home’s electrical system, it’s critical that it’s updated to meet today’s energy demands and safety requirements. In the U.S., homes built prior to the mid-1960s had 30- or 60-amp fuse panels, but those built in the last 50 years have resettable circuit breakers installed. In the U.S. for example, one hundred amps is the minimum allowed, but 200 amps is the standard in newer homes. European homes have similar panels, though different voltage and amperage standards. If your panel doesn’t measure up, it should be replaced. 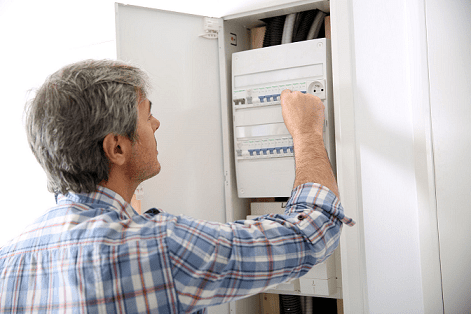 Your panel should also have a device installed to prevent electrocution, as conventional circuit breakers alone can’t protect you. Called a Ground Fault Circuit Interrupter (GFCI) in North America and a Residual Current Device (RCD) in Europe, this device detects imbalances in the flow of current in and out of a circuit and immediately shuts off the circuit to prevent electrocution.

Finally, your panel should also protect against arc faults. These unintentional low-voltage discharges can’t be detected by circuit breakers, so you’ll need to install a special device — called an Arc Fault Circuit Interrupter (AFCI) in North America and an Arc Fault Detection Device (AFDD) in Europe — that will monitor for them and trip the circuit when one is detected.

Find out how old your wiring is

Old or faulty wiring is a major cause of home fires. You can often determine the age of your home’s wiring by the materials used. In the UK, for example, wires coated with lead, fabric, or black rubber were used in homes prior to the 1960s. Similarly, aluminum wiring was only used in US homes from roughly 1965 to 1973 and is 55 times more likely to reach “fire hazard conditions” than copper wire, according to the U.S. Consumer Product Safety Commission. Have a licensed electrician inspect your home’s wiring if you have any concerns.

Inspect all your home’s light switches and outlets. Cracked or broken plates pose electrocution risks, while buzzing or discoloration indicate wiring issues that could pose a fire hazard. If you have small children, make sure every outlet is covered or plugged.

Even if your electrical system is in good shape, your household appliances and devices may be unsafe. Worn cords and damaged plugs increase your risk of both fires and electrical shocks. Improper use — such as running power cords under rugs or installing bulbs with more wattage than the light fixture was designed to handle — is dangerous as well.

A little knowledge and effort goes a long way toward making your home safer.