Today’s colleges and universities face tremendous operational challenges as they work to improve efficiency in buildings that can be decades, or centuries, old, and attempt to build new campus-wide networks to better understand and manage how all their facilities are using energy. With any given school operating multiple building types – from labs and dormitories to theaters and cafeterias – energy managers can easily be overwhelmed with the task of bringing energy costs under control.

The Commercial Buildings Energy Consumption Survey gives some idea of just how much electricity U.S. higher education campuses use in a year – a total of 134 billion kilowatt-hours (kWh), according to the survey’s 2012 data. That figure equates to 17.4 kWh per square foot, which is significantly higher than any other educational facility type covered in the report.

Of course, monitoring and reducing campus energy use isn’t solely an issue in the United States. British and European universities can face even bigger hurdles, given the sheer age of their facilities. Certainly, a few U.S. schools might have signature buildings that date back 150 years or more, but these are rare exceptions, in most cases. On top of often being home to significantly older structures, British and European facilities often are committed to reducing their energy use far beyond U.S. higher-education performance targets. 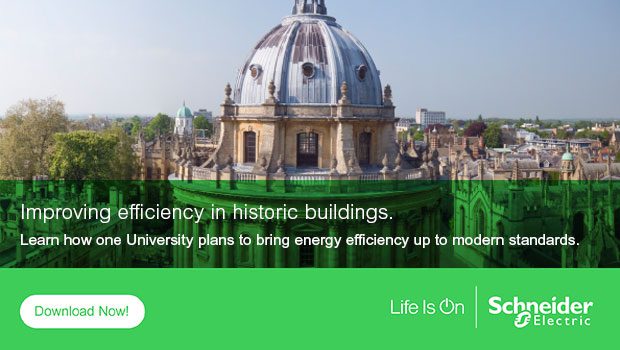 The world-famous University of Oxford in Oxford, England, faced just this twofold challenge recently. As the oldest university in the English-speaking world, the university incorporates numerous buildings dating back to the early 17th Century. Further complicating energy-management efforts is the fact that its numerous colleges are scattered throughout the city of Oxford, so there’s no centralized campus. Even with these obstacles, the University in 2013 outlined a Carbon Management Plan to reduce its carbon footprint by 33 percent, versus levels of the 2005-2006 school year, by 2020.

Schneider Electric, which has a long-term relationship with the University, has become a partner in the effort to reach the ambitious 2020 target. The first step was improving access to information on real-time electricity use, which was accomplished by replacing existing analog meters with more than 1,000 digital meters – including more than 200 mains meters. Then energy managers were able to use Schneider Electric’s EcoStruxure™ Power Monitoring Expert software to collect and organize usage data. Now, the need for manual meter reading (formerly a two-day task undertaken five times per year) is a thing of the past, and departmental-billing efforts have been completely automated.

“The University has over 300 buildings, so having all of the important information at our fingertips means we know what’s going on anywhere, at any given time,” said David Baker, Electrical Engineer in the University’s Estates Services department. ‘I consider the system to be my ‘fifth engineer.’”

You can learn more about Schneider Electric’s partnership with the University of Oxford in this case study. For more on how EcoStruxure Power delivers safer, more reliable and efficient power, and the products used in this project, check out our power monitoring and control line-up.