In theory, every emerging industry moves through the stages of the Consolidation Curve (Harvard Business Review, 2002) as it becomes a mature industry. Know where your industry lies on the curve! Each stage requires a different business strategy and focus. Mastering the strategy ultimately allows your company to be one of the top companies in a mature market.

I wanted to pinpoint the solar inverter industry, so I compared it to three characteristics found in each stage of the Consolidation Curve: market share, strategy and finance. 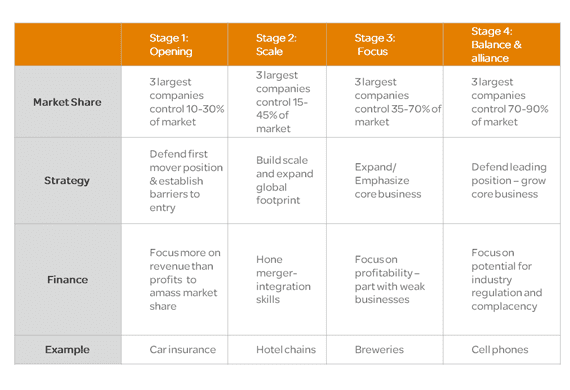 Inverter companies are no longer defending a first mover advantage, but they do continue to establish barriers to entry. As Jon Sigurdsen said in 2011, “it is easy to make an inverter, [but] it is relatively hard to make a good inverter.” For this reason, not everyone can jump into the inverter market. Companies like Schneider Electric with similar technologies like UPS, AC-DC power supplies, motor drives, etc find it easier to enter the market. Incorporating industry-leading parts like Square D disconnect switches into its grid-tie inverters ensures reliability.

The top three solar inverter companies today control slightly more than the 15-45% characteristic of this stage. That is, globally and in certain countries. Market share actually varies greatly by country. For example, the top three companies owned around 60% of the US market in 2012, but only around 40% of the global market.

Building global scale is critically important in the solar inverter industry. Solar emerged primarily in Europe, but has since moved to the US, South America and Asia. Companies with no footprint in promising countries quickly lose market share. Schneider Electric’s global presence gives it an advantage in this stage.

This stage is perhaps most aligned with the current solar inverter industry. Certainly the top three companies do control between 35-70% of the market and have since at least 2007. Mergers and acquisitions have contributed to market share gain. Schneider Electric acquired Xantrex, Advanced Energy acquired RefuSol, and ABB just announced they will acquire Power One.

Mergers require companies to focus on integration and core businesses. Top inverter companies tout themselves as “bankable” in direct response to weaker companies dropping out of the solar market and leaving customers with unsupported products. Strong companies in this stage emphasize their strength and buy-up or weed-out unprofitable businesses.

Profitability should be focused on in this stage, but there are several major inverter companies in the market today with little to no profits. These companies are acting like they’re in stage one where revenue is more important than profits.

We would expect to see recent consolidations in the solar inverter industry resulting in more control for fewer companies. Instead, several top companies have lost market share. The top 10 inverter companies lost 4 percentage points in 2012 compared to 2011, and another 6 points in 2013.

Companies should be defensive in this stage, now defending their lead instead of their first mover advantage. Defending a leading position requires growing the core business. Indeed, most inverter suppliers including Schneider Electric are continuously offering new products to complete their line of offers. Not listening to the market and becoming complacent is the biggest threat in a mature industry; especially in the solar industry with its continuous policy and regulation changes.

Based on the characteristics of the Consolidation Curve, which stage do you think the solar industry is in?

Follow this formula for an easy residential solar installation

What can the solar industry learn from toys?

How solar power gets a boost with smart grid solutions

Technology pushes solar one step forward; Utilities pull it one step back