Storm season is coming — and while we often think about the effects a major storm, such as a hurricane, might have on our data center, we might not consider another culprit: the solar flare. 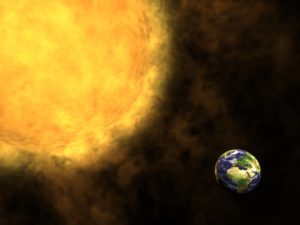 The solar flare is the most severe category of sun storms, and their impact is still largely unknown. But they happen more often than most people realize: The sun unleashed a monster X-class solar flare in March, which caused an hour-long blackout in high-frequency radio communications, according to a report on NBC.

Solar flares occur when built-up magnetic energy on the sun’s atmosphere is suddenly released, creating an intense eruption. Most of the time this energy drifts off into space. But sometimes it hits Earth — and while the radiation from a solar flare reaches the planet in just a few minutes, it can take days for the full effects to surface.

This magnetic activity and induced electric currents can cause a range of problems here on Earth, from electrical surges to over-current conditions and power outages. And that could permanently damage IT and communications equipment, resulting in lost revenue from unexpected downtime.

Effects of a solar flare on the power grid

Electric fluctuations caused by solar flares can blow out transformers in power grids or disrupt electronic systems in satellites (which interferes with cellular and GPS signals travelling to in-car map systems and airplane navigation systems, among many others).

The most powerful geomagnetic storm ever recorded occurred 150 years ago. Dubbed the Carrington Event, it caused telegraph networks to fail all over the world, even setting telegraph paper on fire.

If a solar flare of that magnitude were to hit Earth today, it would be mch more devastating: It could knock down the national power grid for weeks or even months. The amount of economic damage — in the trillions of dollars — is hard to comprehend.

The reality, though, is we don’t really know how a major solar flare would disrupt the data center — or the amount of damage it’s capable of.

Proactive steps to protect your data center from a solar flare

While we can’t stop a solar flare from hitting Earth, there are steps we can take to protect our data center infrastructure from the worst effects of a major solar event:

So should you be worried? Experts say there’s a high probability that a significant solar event will occur again and affect our power grid. After investing so much in data center infrastructure, it makes sense to invest in technology that can protect it from the potentially debilitating effects of a monster X-class solar flare.

Don’t miss out on the opportunity to learn more during our next webinar.

While you can’t control the weather, you can control your uptime!

Just as relevant as customer interfaces are your behind-the-scenes needs: safeguarding equipment and data. From the router that connects you to your CRM database or your local e-mail server, your business applications deserve your proactive attention throughout the year.

How do you ensure that your network stays up and running during power disturbances?

How do you protect your converged voice-data network?

Have you virtualized your servers?

Now, the million-dollar question: when was the last time you replaced the batteries in your UPS?

It goes without saying that every season potentially is power season.

Learn how to storm-proof your network based on your specific business needs.

Register for the Webinar here.