Ethiopian Tadese Boru took advantage of sunlit skies and cool temperatures conducive to a good long run to break the women’s record in yesterday’s Schneider Electric Paris Marathon, finishing in 2:21:06 – also the best performance in the world this year.  On the men’s side, 22-year-old Kenyan Peter Some won with a time of 2:05:38, beating his personal best by more than 3 minutes and posting the second-best Paris time ever, a mere 26 seconds off last year’s record-setting pace by Stanley Biwott.

Another first in this 37th running of the Paris Marathon was Schneider Electric’s participation as the primary sponsor. The company in February announced it has signed a four-year agreement to be primary sponsor of the event. 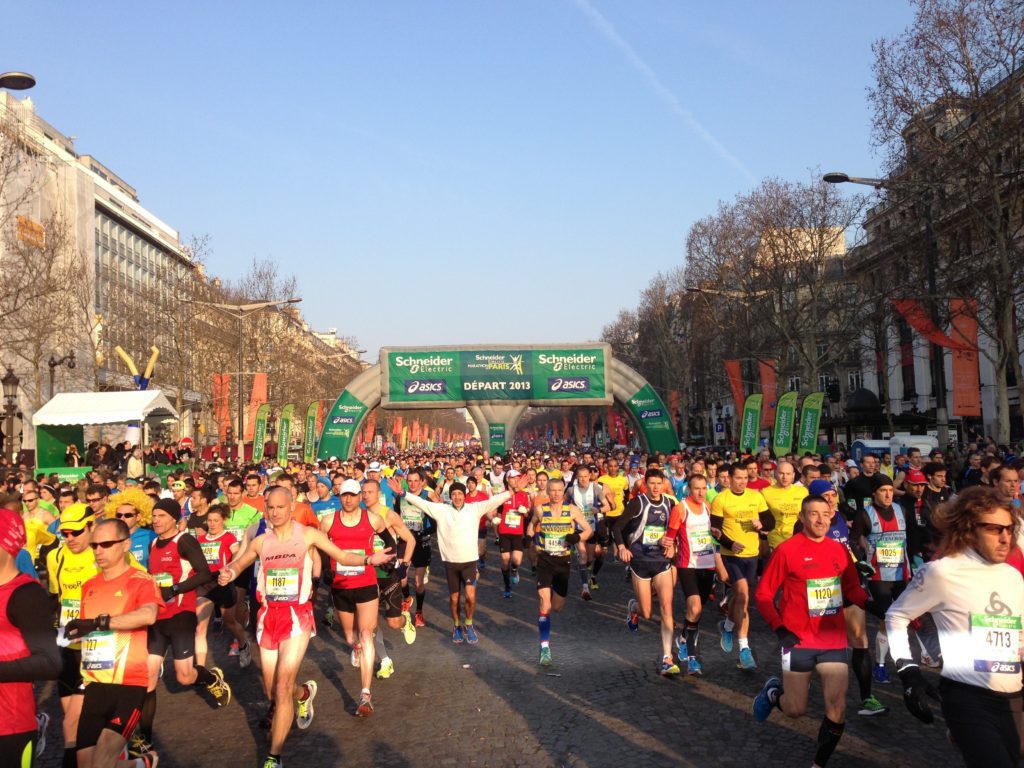 It’s a partnership that makes perfect sense when you think about it. Aaron Davis, Schneider Electric’s Chief Marketing Officer, put it well:

The mission of Schneider Electric is to help people make the most of their energy, by becoming more efficient, reducing energy waste, fighting against climate change for example, each time carrying out wide-ranging collective actions engaging as many people as possible.

The Schneider Electric Paris Marathon is the perfect platform to emphasize our brand values: care, connect, challenge and commit. We see a unique opportunity to link our brand to the spirit and values embodied by the timeless challenge of the marathon, but with a focus on the people, the technologies and the ability to do things differently. As any student of climate issues can tell you, the race is on and we need to run faster to solve issues that become more acute with each passing day. In the long-term, our ambition is to make the Schneider Electric Paris Marathon the first energy positive race in the world.

Toward that end, Schneider Electric made a point to raise awareness about energy efficiency in the days leading up to the race and during the race itself. During the Running Expo that ran for three days prior to race day, Schneider Electric installed “energy pads” near the area where runners pick up their bibs. Runners jump on the pads for 30 seconds then get a read-out of the total energy they produced in kilowatt-hours.

But that’s not all the pads were used for. As the Business Standard reported the day before the race:

Paris Marathon organisers will lay energy-harvesting tiles across the course on Sunday to ensure not all the effort expended by the race’s 40,000 runners goes [to] waste.

The flexible tiles made from recycled truck tyres will span a portion of the Champs Elysees for about 25 metres (82 feet) of the 42.2-km course, according to Pavegen Systems Ltd, the UK maker of the tiles. Each footstep would generate as much as eight watts of kinetic energy, which would be fed back to batteries that could charge display screens and electronic signs along the route, the company said.  …

“Imagine if your run or walk to work could help power the lights for your return journey home in the evening,” Pavegen Chief Executive Officer Laurence Kemball-Cook, who invented the technology, said in the statement. It’s “a viable new type of off-grid energy technology that people love to use and which can make a low-carbon contribution wherever there is high footfall, regardless of the weather.”

No word yet on exactly how much energy the tiles produced but Isabelle Malinconi, Corporate Communication VP for Schneider Electric, said it was expected to be enough to light up the Eiffel Tower for two hours. “That may seem rather modest, but in the end, we hope that this initiative incites people to save energy,” she said.

So year one is in the books and it appears the Paris Marathon was the first to create energy rather than simply witness thousands of participants expend lots of it. As Nick Blandford pointed out in his recent post about the marathon, we would do well to reflect on the state of our cities and how to make them more energy efficient. As he notes:

Over the next 40 years, 70% of the planet will be living in cities. That means today’s younger generation will see the global urban population double within their lifetime.

Schneider Electric, of course, is on top of the issue, delivering numerous technologies that help deliver on the promise of Smart Cities. Expect to hear more about such energy saving efforts in years to come as the Schneider Electric partnership with the Paris Marathon continues.

Energy Management: It’s a Marathon, Not a Sprint

Six Ways Running a Marathon is like Reducing Energy OpEx