Continuing with my series of blogs based upon the workshop we ran at our Kolding Solutions Center (see “24 Hours Putting the Internet of Things Under the Microscope”), I thought it might be interesting to go left field and look at how IoT-style data production and analytics could be put to use to solve problems in another industry.

Fish farming is about as far as you can get from data centers! We were very fortunate to be joined in the workshop by Andreas Brogaard Buhl. He is head of department at the Danish Hydraulic Institute (DHI), and a respected marine biologist. DHI are experts in solving challenges in water environments, in cities and factories, in oceans, rivers and coastlines.

During the workshop, Andreas spoke to me about how data could be usefully shared in Norway’s salmon farming industry. According to the Guardian, a UK national newspaper, Norway, Chile and Scotland dominate production of farmed salmon, which prefer cool, sheltered and tidal waters to maximise growth rates and ward off disease. 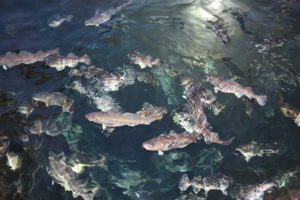 The farming of salmon was actually started there in the 1960’s. Since that time its reputation has swung back and forth between protecting wild fish stocks and being a threat to other wildlife (e.g., seals) and the environment. But the industry has worked hard to ensure its longevity and today it provides an ethical accreditation – ASC – to guarantee the standards of production.

Drawn up by a wide ranging group including NGOs, marine scientists and the industry itself, the Aquaculture Stewardship Council (ASC) certification includes a ban on the prophylactic use of antibiotics, limits on the numbers of fish escapees per production cycle, maximum levels of fish-based feed and disclosure of the use of any feed containing genetically modified material.

Referring to a rough map he’d drawn, Andreas said; “In Norway we’re looking at 1200 salmon producing localities. At these locations they place ring nets in the sea. And they measure temperature, salinity, oxygen content, they also measure current. And they also monitor very carefully how much feed they are giving the salmon.”(You can see a short film of a fish farm on YouTube by clicking this link).

Actually farmers in general keep a lot of data about their produce, whether it’s livestock or arable. With fish farming, data helps maximise yield and therefore goes to profit. “The growth of the fish is very dependent on the temperature… and they (fish farmers) are very interested in how much food is distributed in the cages, at any time during the production cycle.”

A challenge for the industry is the remote location of the farming sites, as well as competition. “You have lots of local companies who are responsible for managing somewhere from 10 to 30 of these sites. And each of them keeps their data to themselves,” said Andreas.

At heart, DHI describes itself as a software company and modelling is part of its DNA. But that would require cooperation and input from the industry as a whole, and a lot more transparency: “With more holistic thinking you could pool this data and you could start to benchmark. Each producer would get information about how the others are faring.”

“By collecting this data into a larger pool, we would be able to compile a complete oceanographic model of the coastline of Norway. Which is a very useful tool and which could be utilised in lots of ways; like scenario planning; or to form a water forecast and use a predictive model to look, say, three days ahead. Such a tool could also be useful for looking into new production.”

“My challenge is I need to demonstrate the value of this tremendous tool to an association of fish farmers and the various companies involved. We’ve done a lot of good work in Danish waters, and we’ve been able to make water forecasts and other ecological forecasts and there’s no doubt in my mind that this would be of tremendous value to the farmers in Norway.”

Convincing an industry to play nice is a challenge. A few years ago we kick-started the Data Center Genome with a view to developing a database of the server performance for the purpose of more accurate facility capacity sizing. We quickly ran into concerns about data sharing – which some thought was potentially a strategic threat. The challenge, as I mentioned before, is to convince stakeholders of the benefit of data sharing to the industry as a whole.

Recently the need for a change in the way the data center industry operates has been emphasised by the prediction that if we keep on doing what we’re doing, by 2040 there’ll be no energy for anything other than data centers. Software and the IoT could be a vital part of that journey to a better future. In the meantime, should you see that DHI are successfully working with Norway’s fish farming industry, remember you read it here first!

How Might IoT and Data Sharing Lower Data Center Cost?

The New York Times Has an Incomplete Take on Data Centers