Like much of the U.S., last Sunday I was watching the World Cup match pitting the U.S. against Portugal with my 9-year-old son. Things weren’t going so well for the U.S., which was down 1-0 through much of the match. 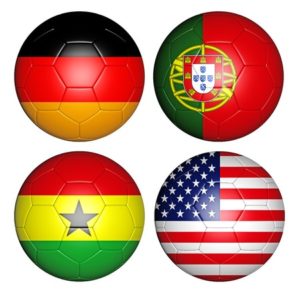 But some 60+ minutes in, things started turning around, as the U.S. scored a tying goal. We hollered, we cheered. And then, about 17 minutes later, at the 81-minute mark, the U.S. netted another goal to go up 2-1. More hollering, more cheering. We yelled for my 11-year old daughter to come watch – her being the only soccer player in the family. She did. A tense few minutes followed as we were all hoping the U.S. could hold on to the lead. Here’s where things got weird. For one thing, we have the “extra time” phenomenon. Now, I have to admit I’m more of a baseball and football guy, sports with either no clock or one that plainly spells out how much time is left in the game.

With soccer, information on time remaining is harder to come by. Once the regulation 90 minutes is up, the referees add on some time, “extra time” as it’s known, appropriately enough – to make up for injury timeouts and the like. Actually, there are no timeouts for injuries or, apparently, anything else – the clock just keeps ticking; hence the need for “extra time” to make up for it. Why they don’t just stop the clock is beyond me. As a fan, albeit a casual one, I find this sort of timekeeping annoying. At least this year they did put a little box on the TV screen saying how much “extra time” was added; I don’t even remember seeing that in years past. You were essentially in the dark as to when the game was going to end. I need more and better information. Imagine running a data center with little to no information on things like temperature in various spots and how much power each rack was drawing. You’d be in the dark with respect to whether a failure was imminent, or where the best place to put a new crop of servers might be.

Data center infrastructure management (DCIM) software has dramatically changed that equation. A proper DCIM deployment will provide you with all sorts of valuable information to help keep you on top of the health and well being of your data center. You’ll know when you’re getting a “hot spot” due to inadequate cooling in a particular area. If you’ve got some new servers coming in, the DCIM tool will help you determine which rack can best accommodate them from a power and cooling perspective. In short, DCIM gives you the kind of information you need to do an effective job at data center management. With good information in hand, hopefully you’ll fare better than the U.S. did by giving up the tying goal with just seconds left in the match – and consequently putting their tournament lives in jeopardy.